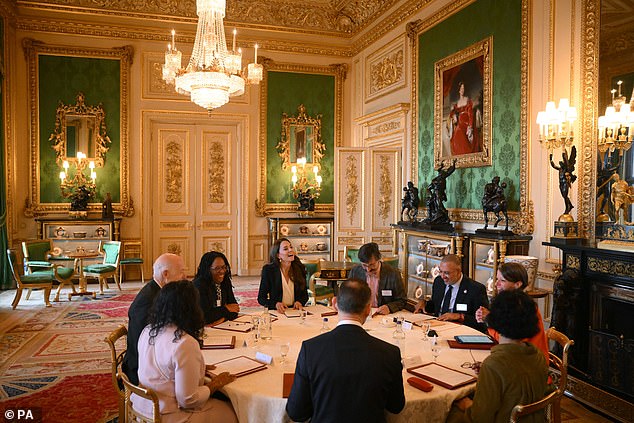 The Princess of Wales hosted a meeting for the Royal Foundation Centre for Early Childhood today in one of Windsor Castle’s most majestic reception rooms, which has a fascinating history behind it.

The Green Drawing room has long been used by members of the royal family to host guests, with the late Queen Elizabeth welcoming the Indian prime minister in 2009 and the first Irish head of state in 2014 in the emerald room.

Its four walls have also seen more intimate family moments, from the wedding photos of Prince Harry and Meghan Markle, to a gathering of dozens of royals following a baby Prince Harry’s christening.

The room has undergone several restoration projects over the last two centuries, with King George IV giving it a lavish makeover between 1824 and 1830.

After the state room was partially destroyed in the devastating fire at Windsor Castle in 1992, another enormous renovation project began to restore the room.

But what relics can be found inside the Green Drawing Room? FEMAIL takes a look at its most striking features…

The Green Drawing Room is kitted out with Morel & Seddon furniture from top to toe, including emerald chairs around the table.

Combined with furnishings from Carlton House, the Morel & Seddon green woven silk chairs were re-designed for the restored version of the Green Drawing Room following the 1992 fire.

The walls above the chairs also feature panels of the same woven silk pattern, matching the furniture in the room.

In addition to the chairs, the room also features Morel and Seddon sofas, which havd a straight back and mahogany frames, with the front legs shaped into lion’s paws and the back legs shaped like sabres.

The bronze and gilt candelabras, of which there are several in the room, depict scenes that appear to be from Roman civilisations

The bronze and gilt candelabra in the Green Drawing Room take the form of a group of what appear to be Roman statues.

A close look at the sculpture shows what appears to be a Julius Caeser-style male figure carrying roaring lions on chains.

Meanwhile a woman calls out to the man from lower down as the male figure is risen high.

The candelabra are dotted below mirrors throughout the Green Drawing Room, acting as wall lighting in the space.

Artist William Gibb completed a painting of the candelabra and presented it to Princess Mary in 1935.

The curtains in the Green Drawing Room are some of its newest features as they were designed as part of the restoration following the 1992 fire.

Sketches on the Royal Collection Trust website show the curtains and valances being designed by Pamela Lewis 1995 as she portrayed them in watercolour.

Other sketches on the RCT website show similar designs created by the interior designer for curtains in the Crimson Room and the Octagon Room.

A satyr is a creature in Greek mythology which is a male spirit which has the ears and tail of a horse.

The Royal Collection Trust archive shows a photo believed to have been taken in 1914 by Edward Kemp who was an inventory clerk for Windsor Castle.

In the photo, the two statues appeat on the fireplace, with a clock and a pair of lamps.

Although the photo is more than 100 years old, the statues have clearly survived for at least a century and were salvaged from the 1992 fire.

The display cabinets in the Green Drawing Room are a set of 12 made by Tatham, Bailey & Sanders.

The cabinets were originally used by George IV at Carlton House, where he stored the overflowing books from his library.

When they were moved in to the Green Drawing Room, the cabinets were adapted by Morel & Seddon into display cases.

Inside the cabinets today are pieces from the Louis XVI dinner service, which was made at the Séves Porcelain Manufactory near Paris, France.

The Thomas Parker table, which is a set of two, originally was placed in the room as a reading table

One of the many tables in the Green Drawing Room is the Thomas Parker Centre Table which dates back to the early 19th century.

According to the Royal Collection Trust, the table (which has a matching second piece) were originally used as reading tables and placed at either end of the room.

Thomas Parker was said to specialise in making elaborate furniture from brass in a classic French style.