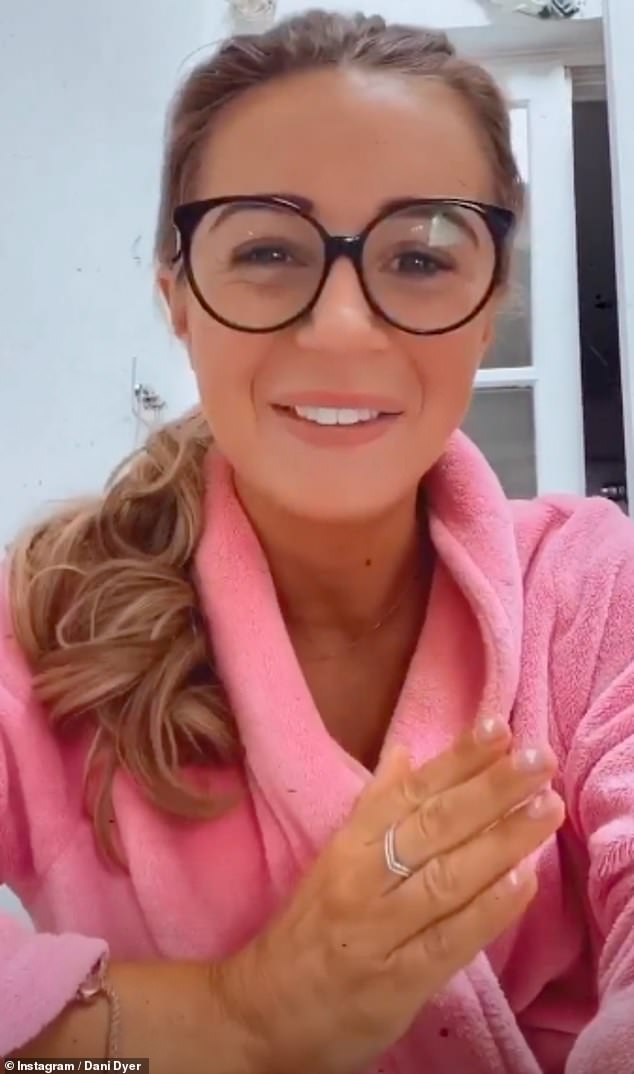 She’s been keeping her fans up to date with her first pregnancy.

And now Dani Dyer, 24, has revealed that she’s started feeling her baby kick after worrying she wouldn’t be able too due to having an anterior placenta.

The reality star took to Instagram on Sunday to explain that despite her placenta cushioning the baby she’s started to feel movement at 19 weeks.

Happy news: Dani Dyer has revealed that she’s felt her baby move for the first time after worrying she wouldn’t be able too because of having an anterior placenta

Speaking in her pink dressing gown and black framed glasses, Dani gushed that it was ‘so lovely’ to feel her child moving around.

She explained how she realised what the kicks were during a visit to a midwife after first assuming the movements ‘were wind’.

Dani said: ‘The other day i was standing by the sink and I felt this feeling in my belly. I thought “It’s probably wind Dan, stop overthinking”.. but maybe it was the baby!

‘Anyway, I go and see this lovely lady called Becky in Loughton who I love and adore and she’s a midwife. I go see her once a week in between my scans, she checks my blood pressure and stuff like that and the baby’s heartbeat. 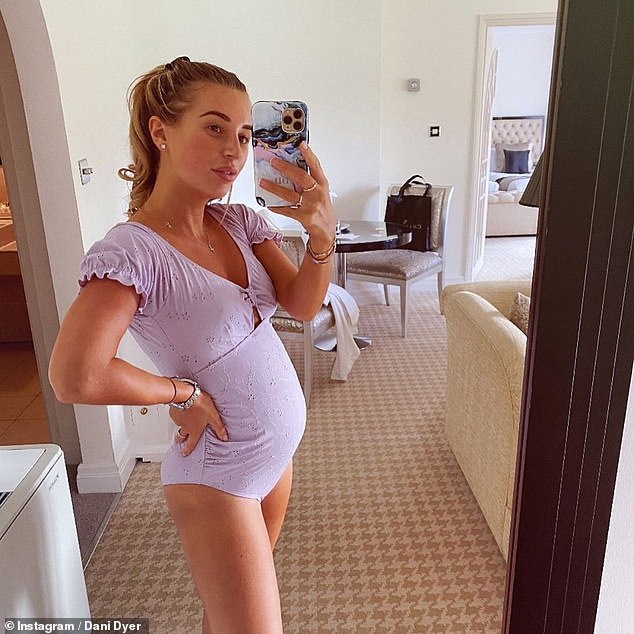 Glowing: The reality star, 24, is pregnant with her first child with beau Sammy Kimmence

‘And yesterday there was a tiny kick and she went “did you feel that Dan?” So I have been feeling the baby!

‘And its so lovely because at my last scan they told me I had an anterior placenta.

‘It’s basically my placenta is at the front and cushions the baby so I might not be able to feel the kicks and movements so much… but I thought so long as the baby’s healthy stop stressing about that.’

Dani also wrote on her post that it would be lovely if her partner Sammy could feel their baby moving while in her tummy. 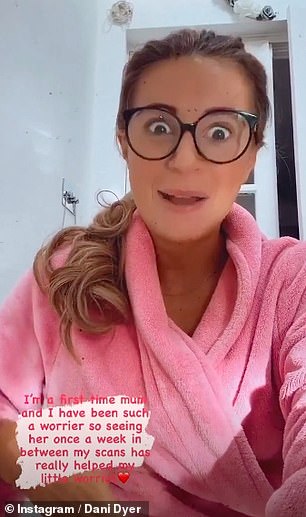 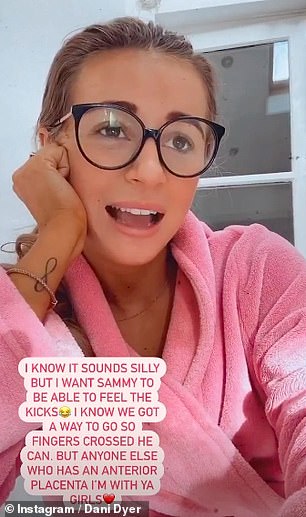 Update: Taking to Instagram on Sunday, Dani explained how she first thought the kicks were ‘wind’ and she had been told at her last scan about the anterior placenta

The beauty ended her update by showing her support for other pregnant women who might have an anterior placenta and sweetly writing ‘she was with’ them.

In July the reality star announced she was expecting her first child with boyfriend Sammy – just three months after they rekindled their relationship.

‘Little bubba can’t believe you are going to be ours,’ she wrote, ‘Me and Sammy are so excited to start this next chapter in our lives, feel so lucky and grateful…2021.’

Dani also recently said that she has started to ’embrace’ the changes in her body.

She wrote: ‘I’ve really started noticing the changes in my body and I’m definitely embracing it. 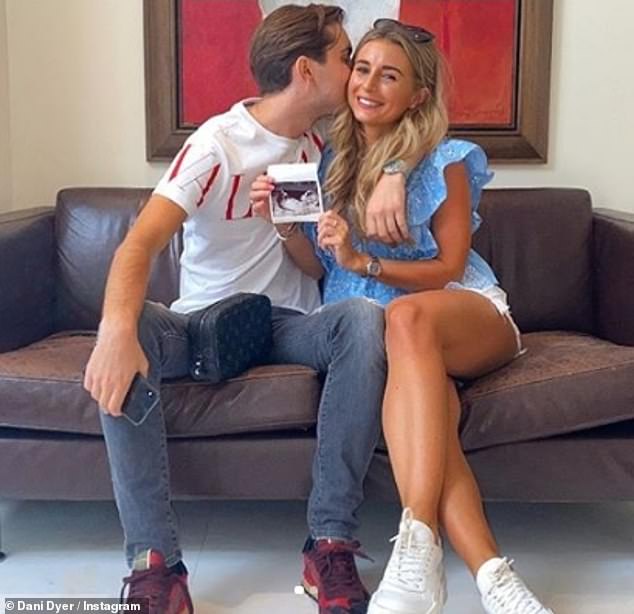 Joyful: Love Island winner Dani announced that she was expecting her first child with Sammy back in July

What is an anterior placenta?

An anterior placenta is when the placenta attaches to the front wall of the uterus. This is a normal place for the placenta to implant and develop.

However having this can make it a bit harder to feel movements as the baby is cushioned by the placenta.

Most women start to feel kicks between 18 and 24 weeks, but first time mums may not until after 20 weeks.

It can also make it more difficult to have some tests, such as amniocentesis, but not all women are offered this during pregnancy.

Having an anterior placenta can also increase the chances of the baby being in a back-to-back position before birth.

Always contact your midwife if you think your baby’s movements have slowed or changed.

‘Apparently at this stage I’m supposed to feel ‘on top of the world’ which I really hope for as the first few months have been really hard.’

But Dani revealed it was a struggle to find suitable maternity clothes and said she only had a handful of outfits to choose from.

She said: ‘I’m so in denial that I don’t fit into any of my clothes anymore. I can’t find any nice maternity clothes, all very granny for me.

‘I’m literally living in six outfits, I’ve got two pairs of jeans that I bought from Zara that are like a paper bag and four tight dresses, the ones that are really stretchy. 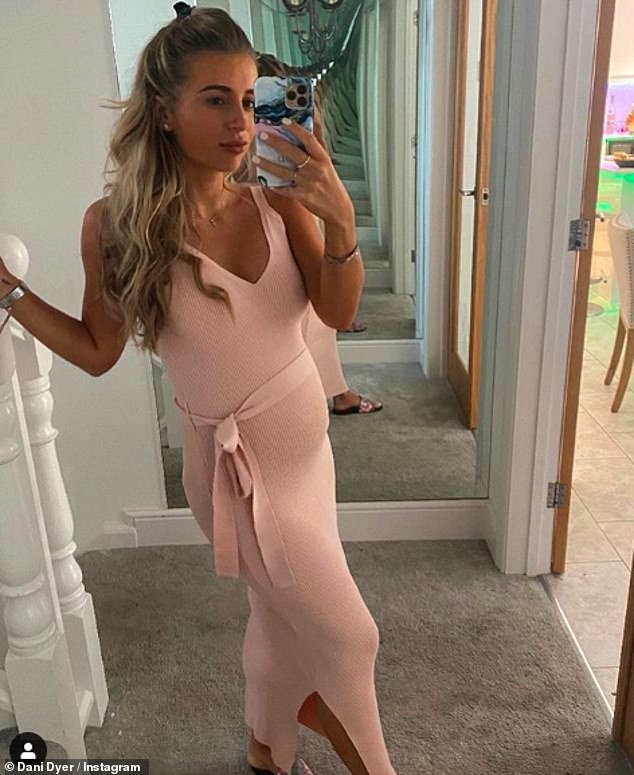 Mama to be! Dani has been keeping her fans updated with her first pregnancy

‘And I’m sitting here like, what am I going to wear today? I have to alternate my outfits cos I’ve literally got six that fit me.’

Dani has also been giving updates on the severe migraines she’s been experiencing during her pregnancy, saying acupuncture had provided her with relief.

She said: ‘I asked my midwife and it’s completely safe, so far so good. I have another one next week. Spent less time on my phone/television (like the doctor said haha).

‘Drinking a lot more water and noticed a difference.’ 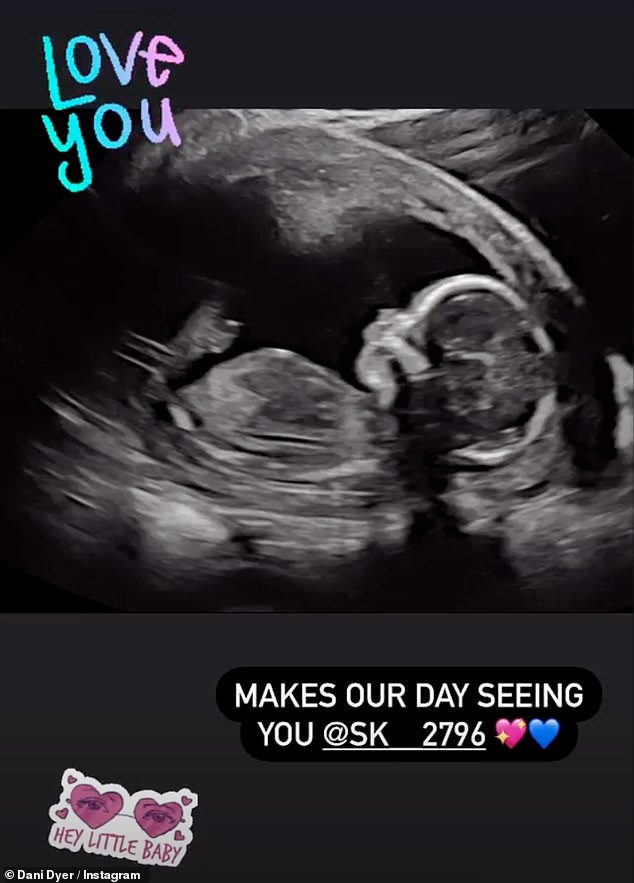 Hey little baby! Dani shared a picture of her scan and admitted it ‘made their day’ seeing their unborn baby during the ultrasound