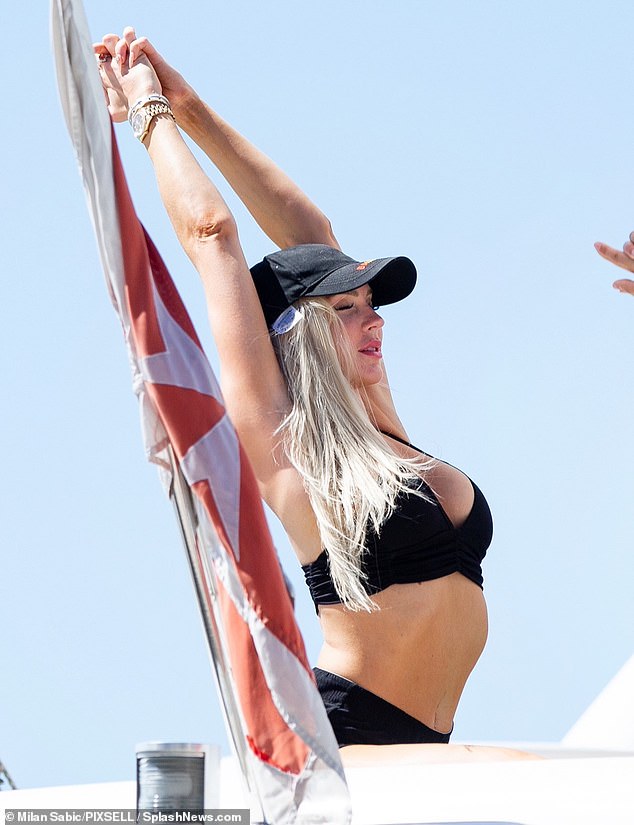 She’s currently on a two-week cruise in Croatia with her multi-millionaire husband Christian Richard.

And Christine Quinn made sure to keep up her exercise routine on her holiday as she worked up a sweat during a yoga session in Hvar on her yacht on Tuesday.

The reality star, 31, showed off her ample assets and washboard abs in a tiny black sports bra as she expertly moved into different positions during the workout.

Wow! Selling Sunset’s Christine Quinn showed off her washboard abs in a black sports bra as she worked up a sweat during a yoga session on a yacht in Croatia on Tuesday

She completed her sporty look with a pair of black shorts and $395 Balenciaga baseball cap as she topped up her tan whilst getting toned.

Real estate agent royalty Christine also flashed a glimpse of her pert posterior and lithe legs as she executed handstands with the assistance of an instructor.

She wore her trademark blonde tresses in loose waves and looked to be in very high spirits as she took part in the session alongside a friend. 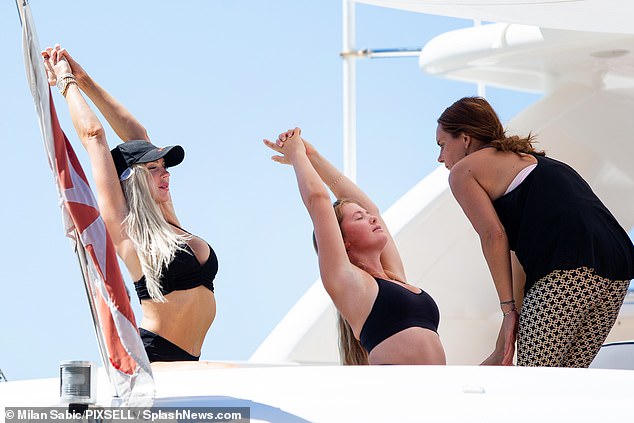 Flexible: The reality star, 31, showed off her ample assets in the sportswear as she enjoyed her workout with a friend 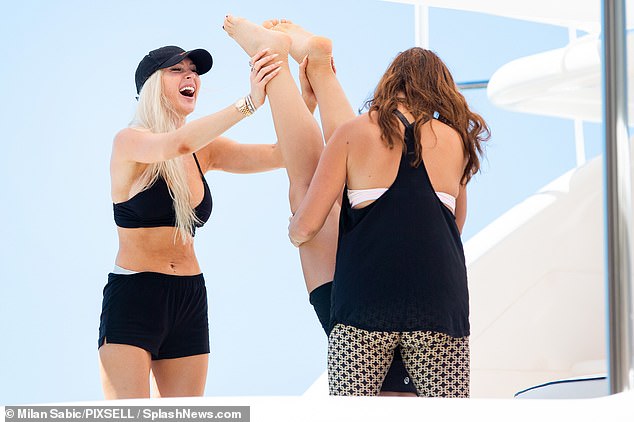 Helping hand: She completed her sporty look with a pair of black shorts and black cap as she topped up her tan whilst getting toned 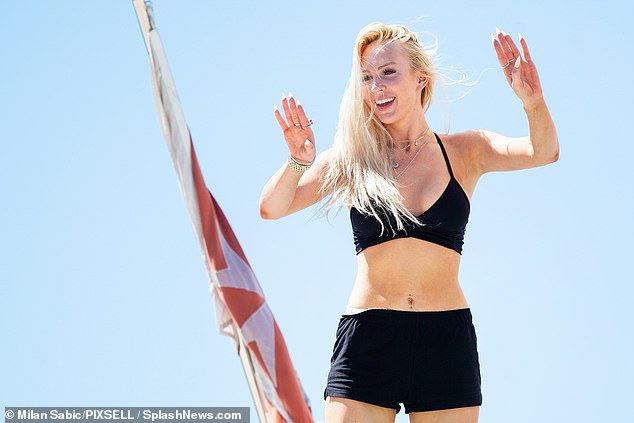 Fun in the sun! She wore her trademark blonde tresses in loose waves and looked to be in very high spirits onboard

While Christine often shows off her incredible figure, she has made no secret of the fact that she has had cosmetic surgery, and is passionate that people should be honest about any procedures they’ve undergone.

The blonde bombshell told Vogue: ‘I’m all about plastic surgery truth-bearing. It’s important in a world where there’s this facade of social media causing people to have body dysmorphia.

‘People think that [things are] real, and it’s not. I tell people all the time: I got my boobs done, I get my lips done, tons of Botox, tons of make-up. 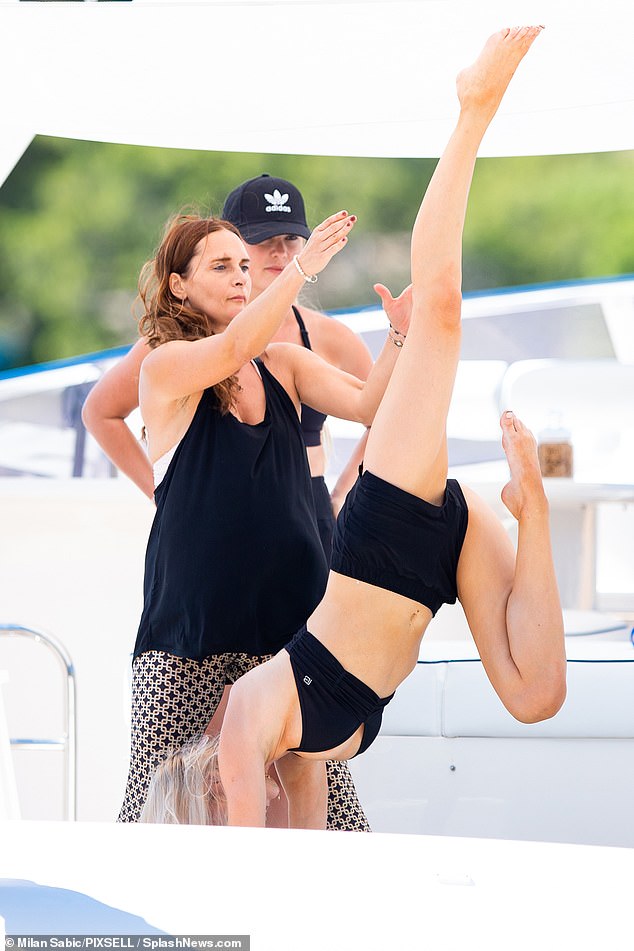 Impressive: Real estate agent royalty Christine also flashed a glimpse of her pert posterior and lithe legs as she executed handstands with the assistance of an instructor 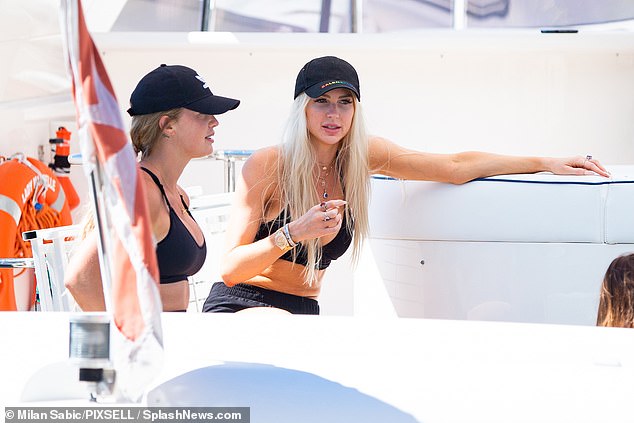 Thirsty work: Christine and her friend took a break from their session at one point and lounged around on the luxury liner 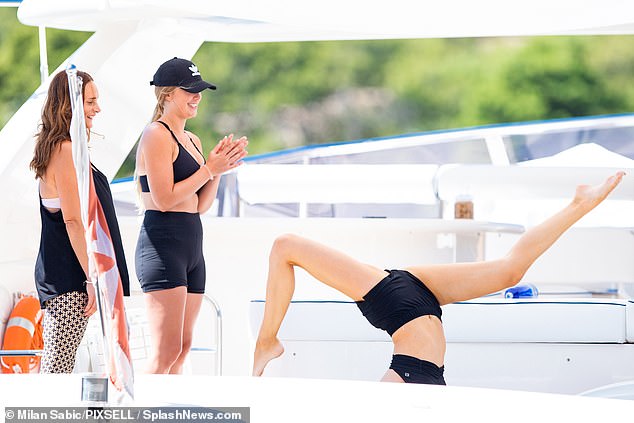 Exercise: Christine seemed determined to nail a series of advanced positions during the yoga session 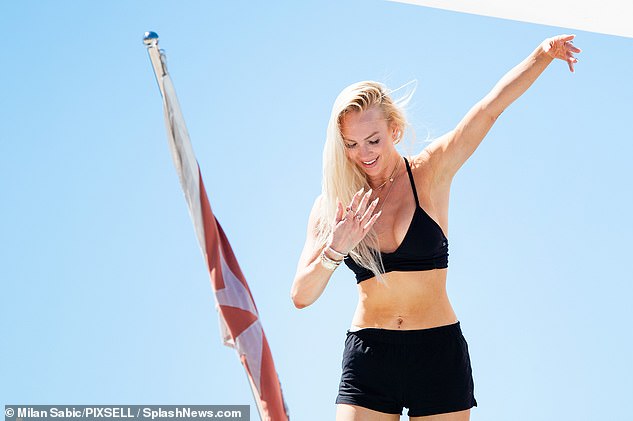 Toned: The real estate agent showed off her surgically-enhanced assets as she worked up a sweat

‘How I look on Selling Sunset is not how I look when I wake up in the morning.

‘The full start to finish, including wardrobe, is around two-and-a-half to three hours. My glam isn’t cheap, either – $1,000 a day, if I go all out. It’s expensive to look this cheap.’

Christine went on to say in season one she wasn’t doing as well financially so used to buy designer clothes and then return them after filming. 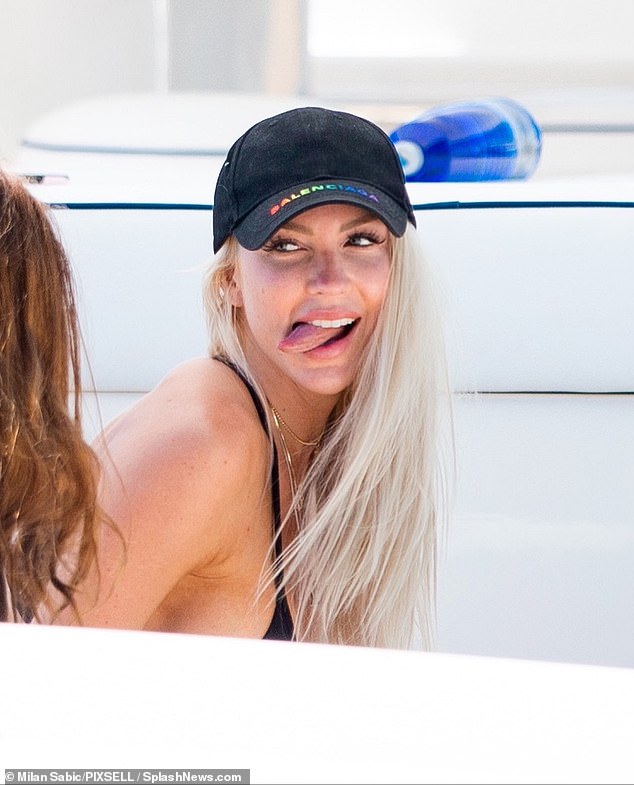 Holiday: Christine donned a $395 Balenciaga baseball cap as she topped up her tan on the boat 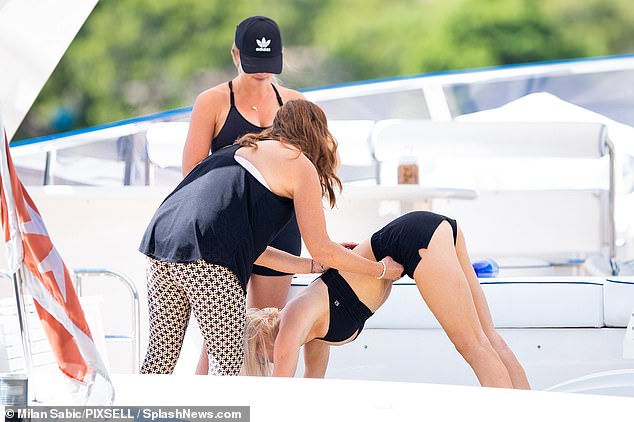 Professional: Christine was assisted by a yoga instructor who helped her into the various positions 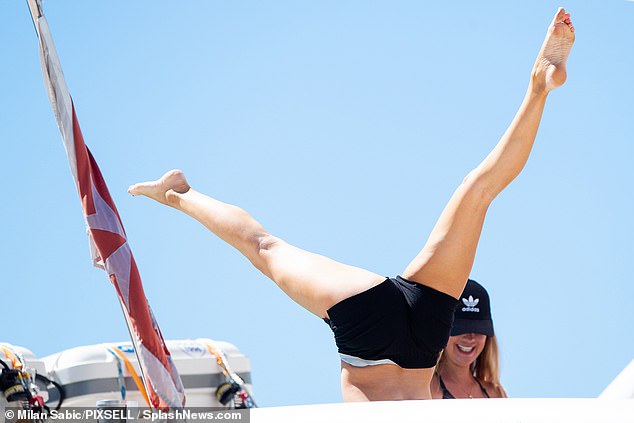 Advanced: The star even managed to do the splits in the air during the morning exercise class 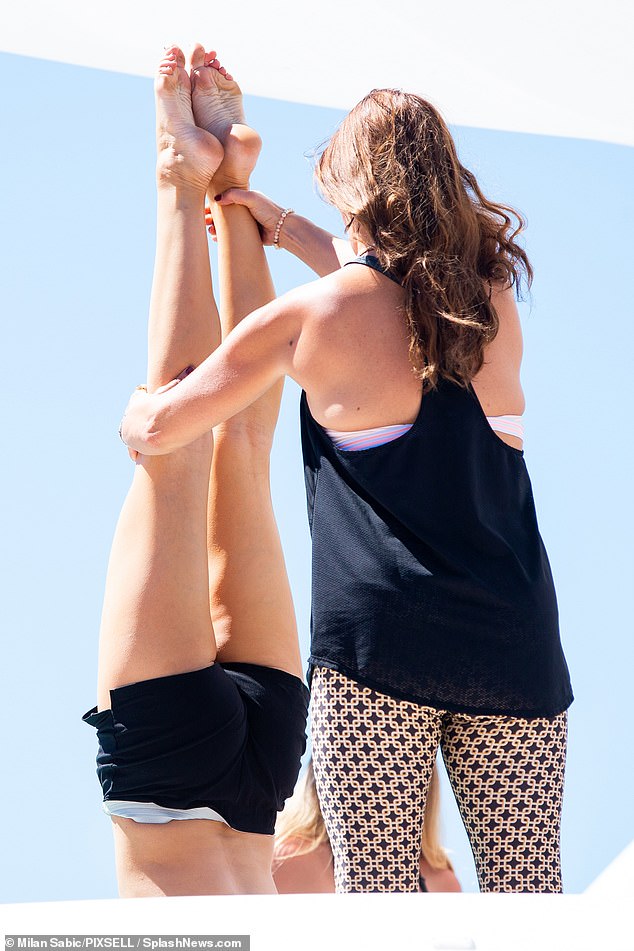 Leggy: Christine flaunted her toned and tanned legs as she moved into a handstand onboard the yacht in Hvar

This comes just after Christine told The Sunday Times that she has shed a tear or two over ‘hurtful’ trolls reacting to her role on Selling Sunset.

The siren said: ‘People that don’t know me say hurtful things. I’m just like, “Ugh, whatever.” I don’t know these people.

Although she’s as vulnerable as the next person, Christine clarified she has no intention of toning down her villainous persona. 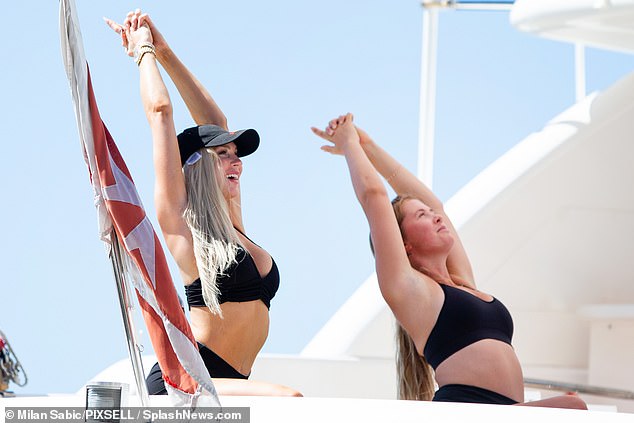 Honest: While Christine often shows off her incredible figure, she has made no secret of the fact that she has had cosmetic surgery 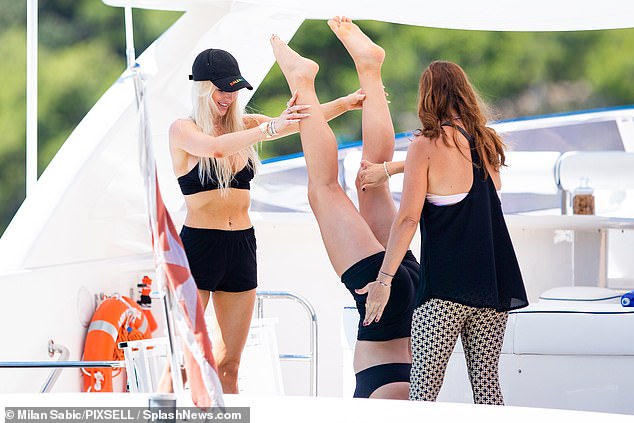 Friends: Christine helped her friend as she attempted a handstand alongside their instructor for the day 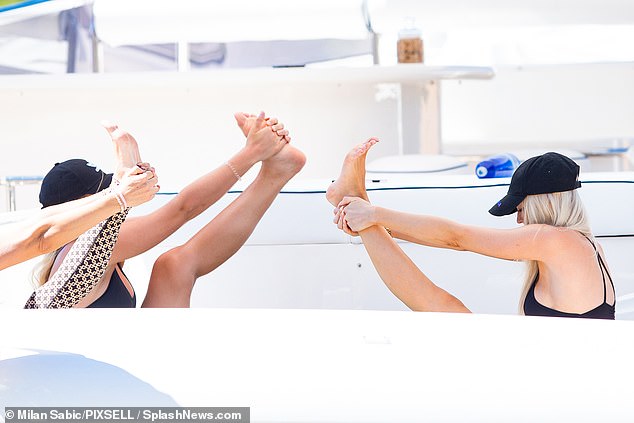 Warm up: The two women made sure to stretch out their limbs during the class on Tuesday morning 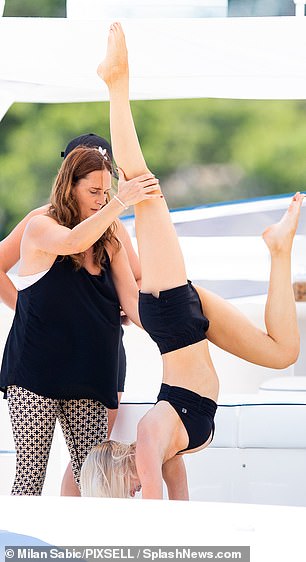 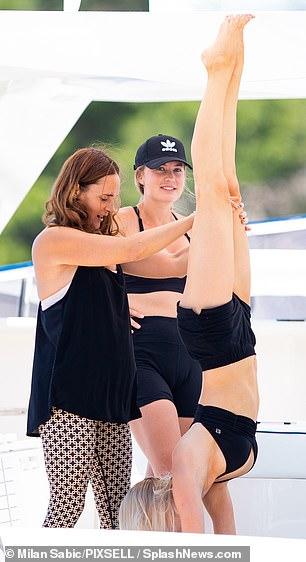 Moves: She showed off her core strength in a variety of positions alongside her pal onboard

She said: ‘That’s what people love about me. But obviously there are different sides to me. On the show, it’s one note. But I’m a multifaceted villain.’

Season three of Selling Sunset saw Christine tie the knot with retired tech entrepreneur Christian, 41, at a downtown Los Angeles cathedral in front of 75 friends and family, where they even had black swans in attendance.

Although the wedding took place in December 2019, fans were not able to see any pictures of footage from the big day until last month, ahead of the latest series’ debut. 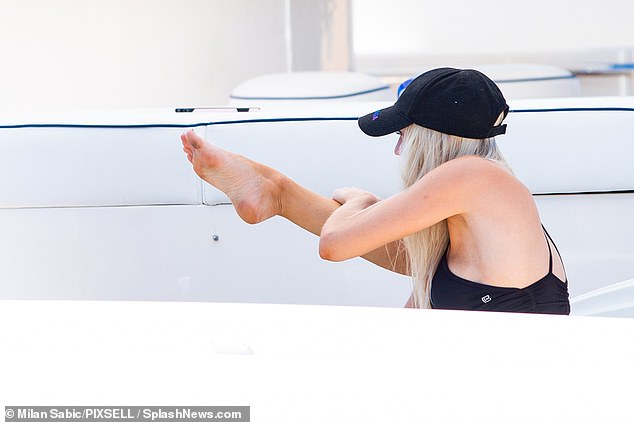 Getaway: The reality star, 31, is currently on a two-week cruise in Croatia with her multi-millionaire husband, retired tech entrepreneur Christian Richard, 41 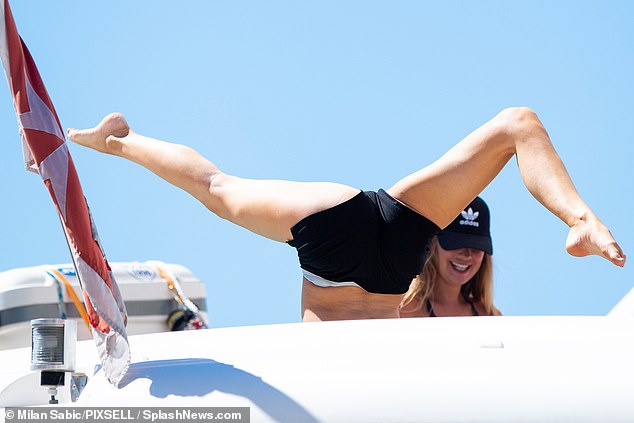 Perfect: The reality Queen moved herself into a variety of impressive positions in the sunshine 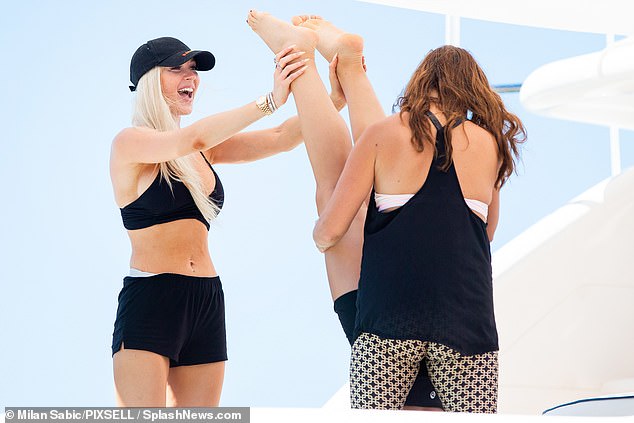 Happy: Christine looked like she was having the time of her life during the class on Tuesday 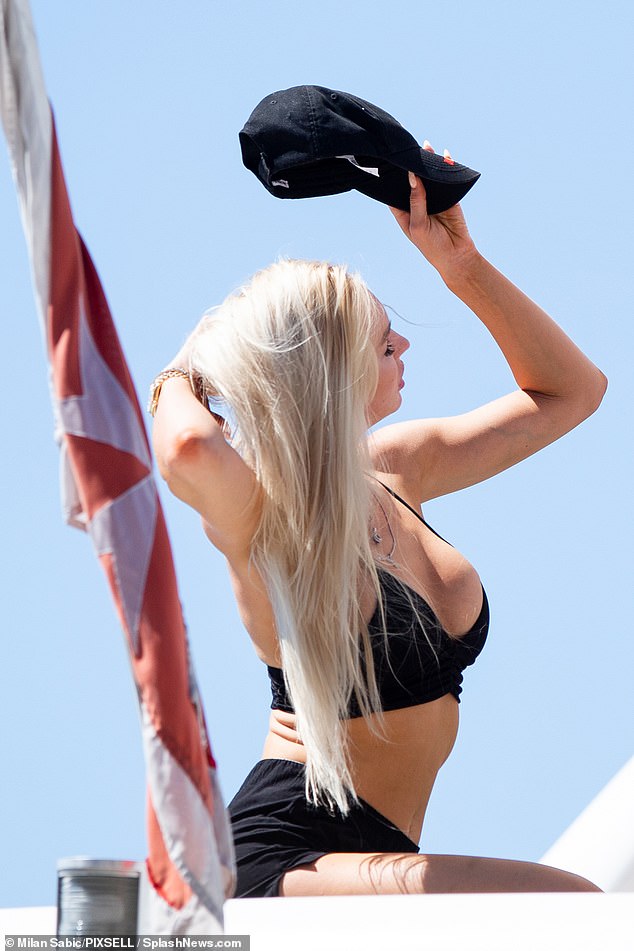 Hot stuff! Christine made sure her hair still looked as glamorous as ever as she perfected her look onboard 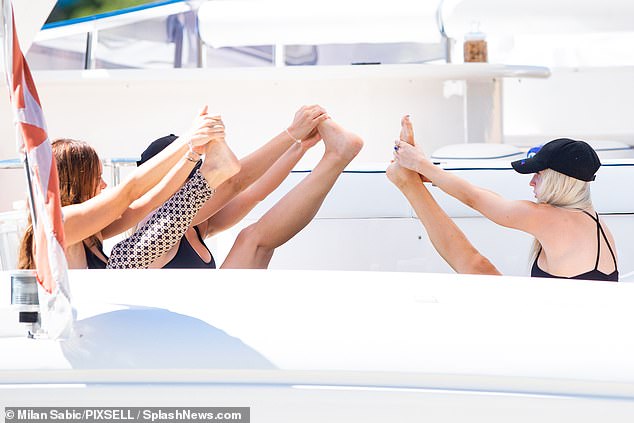 Bikini bod: Christine made sure she kept up her toned appearance even though she was on holiday

The bride was a vision in a billowing black gown, and looked lovely even though she was sick with coronavirus at the time.

The winter wonderland wedding was put together in just two months by Beverly Hills event planner Lisa Lafferty with ‘love’ as the budget and included black stallions, a bleeding cake topped with gargoyles, and real snow in Los Angeles.

Christine told People magazine: ‘We wanted to get married in December to start off the New Year [as husband and wife]. And a winter wonderland theme with a wicked twist is memorable forever. 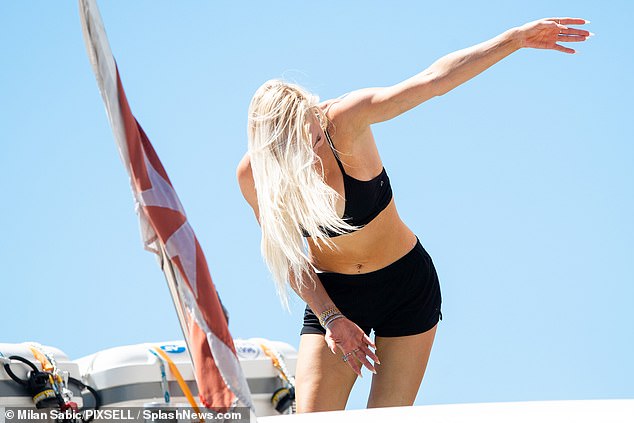 Glam: Christine still managed to look glam while exercising as she let her blonde tresses flow over her shoulders 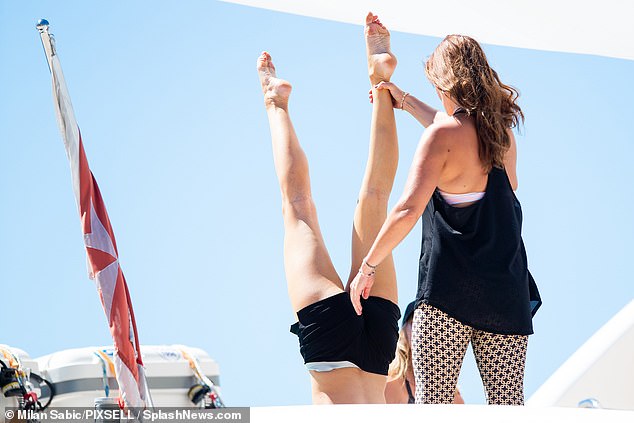 Summer break: Christine has been in Croatia for two weeks with her husband Christian who she married last year 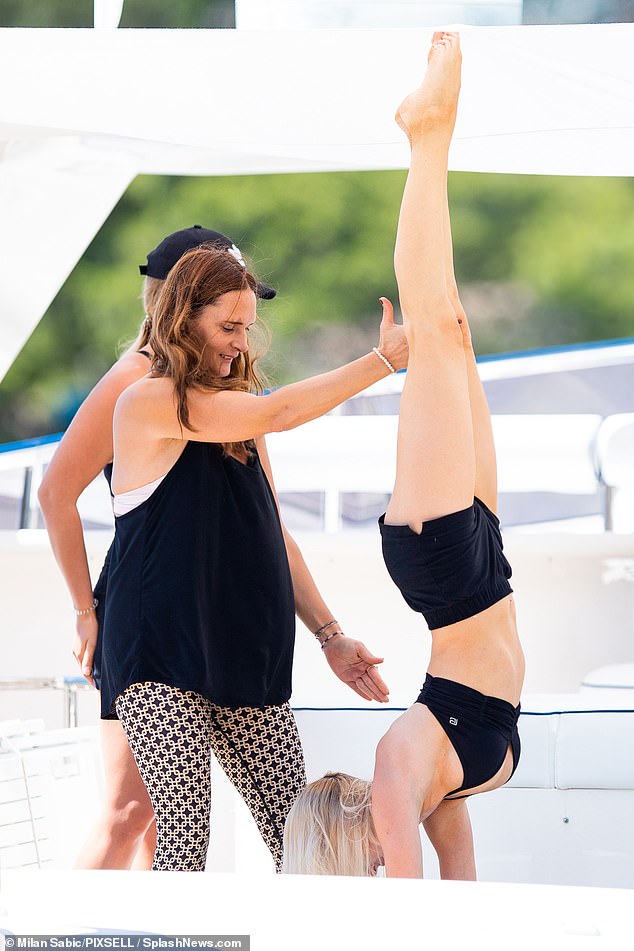 Lithe: She showed off her incredibly flat stomach as her instructor held her in a handstand 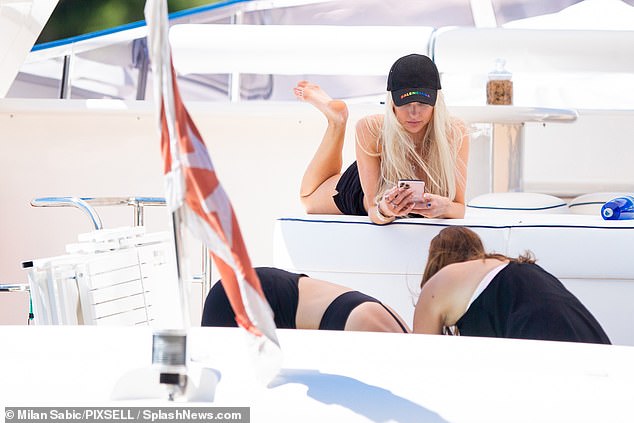 And relax: She couldn’t resist a look at her phone during a quick break from the high intensity workout 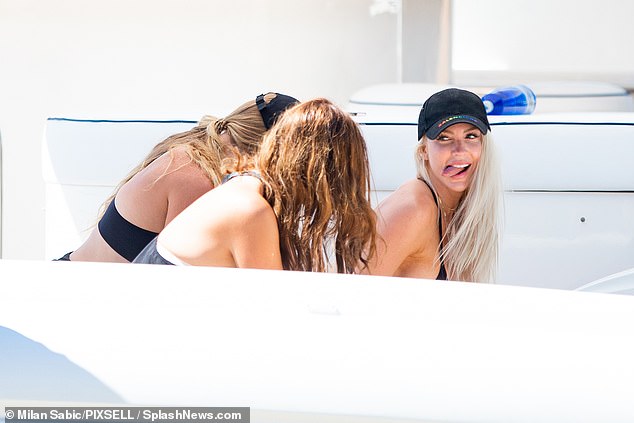 Cheeky: She pulled a funny face and stuck her tongue out during the morning yoga training

‘I never conformed to the status quo or societal expectations. I’ve always enjoyed being bold, different and trendsetting.

‘I’ve always wanted to get married in a black wedding dress, and I’m so happy that my dream came true.’

But the real estate agent, who recently worked with Farrah Abraham of Teen Mom fame, did not feel her best. 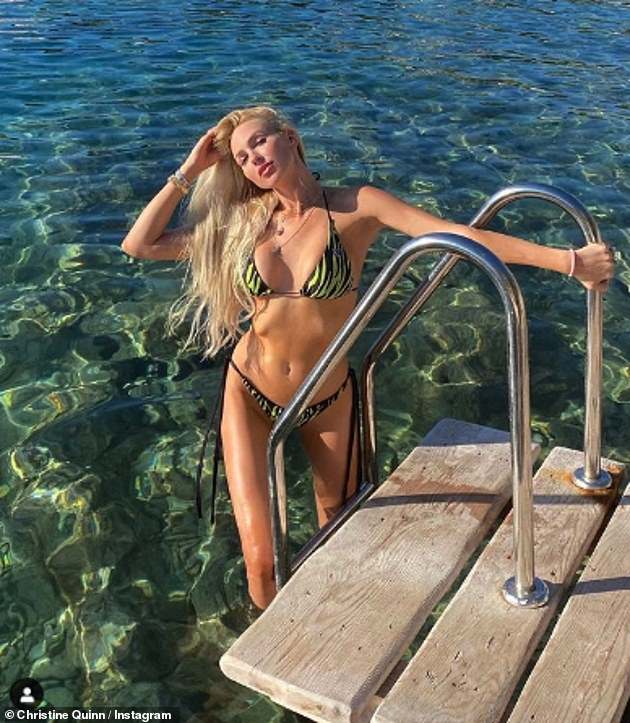 Sizzling: Christine proved she was living the millionaire lifestyle as she shared a slew of the bikini-clad snaps from her Croatia trip on Instagram this week

Talking to Goss Chats, she said: ‘I was really, really sick on my wedding day. I actually had, which I now know, was corona.

‘I got really sick in late December and we were travelling. I was sick for about a month when we were filming.

‘I couldn’t even have a bachelorette party, I was so bummed about that. That time was such a high but a low at the same time.’ 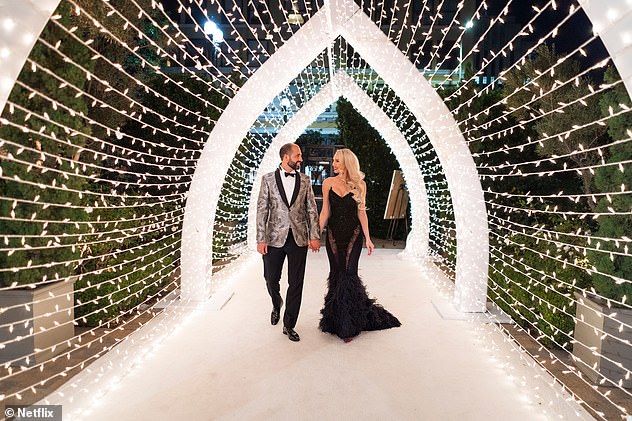 Here comes the bride: Season three of Selling Sunset saw Christine tie the knot with businessman Christian, 41, at a downtown Los Angeles cathedral in front of 75 friends and family