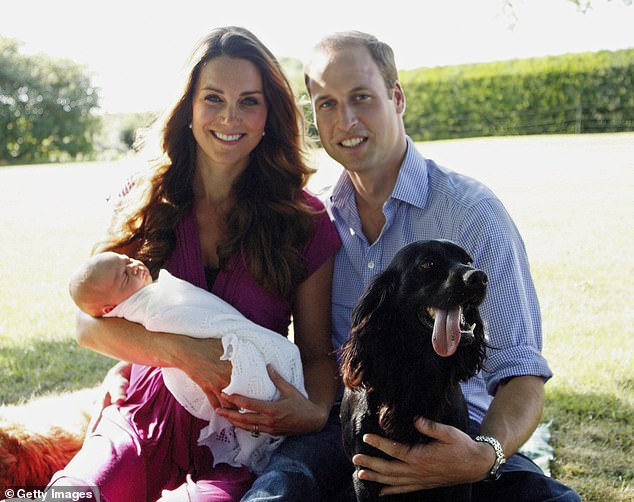 ‘We will miss him so much’: Prince William and Kate Middleton tell of their heartbreak after their ‘dear dog’ Lupo died over the weekend

Prince William and Kate Middleton have been left heartbroken after their ‘dear dog’ Lupo died over the weekend.

The Duke and Duchess of Cambridge shared a picture of their beloved pup earlier this evening.

Sharing the news with their 12million Instagram followers, they wrote: ‘Very sadly last weekend our dear dog, Lupo, passed away. He has been at the heart of our family for the past nine years and we will miss him so much. – W & C’.

The Duke and Duchess of Cambridge have announced their English Cocker Spaniel Lupo has died. Lupo appeared in numerous photos alongside the royals, including one of the first to feature Prince George, above, in 2013

Followers shared their condolences with the royals after they shared the news on Sunday evening.

Another follower wrote: ‘So sorry did your loss… animals are not pets they become family.’

Prince William and Kate Middleton said Lup (pictured with Prince George in 2016) was ‘at the heart,’ of their family since 2011

Lupo featured in many pictures with the royals, including one of the first official photos of Prince George.

The English cocker spaniel was bred from a dog which was owned by Michael and Carole Middleton, Kate’s parents.

It is believed Lupo helped William and Kate pick a name for Prince George.

The Duke and Duchess of Cambridge have revealed their beloved dog Lupo has died at the age of nine.

According to The Sun, the couple wrote names on various piece of paper and scattered them on the floor.

Lupo wandered through them, but stopped when he reached the seven-year-old’s name.

Kate Middleton is thought to have named Lupo after her paternal great-grandmother, who was born Olive Christiana Lupton.