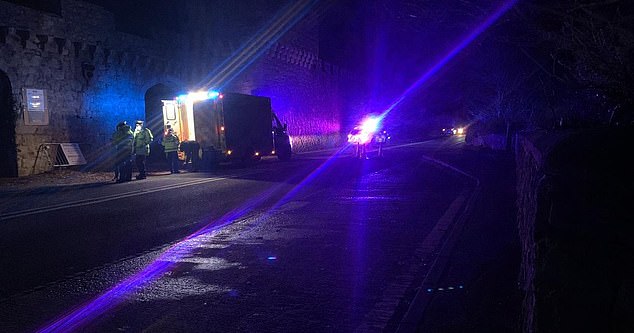 A woman pedestrian has died following a fatal collision with a car outside the I’m a Celebrity castle.

Ambulance crews rushed to the scene near Gwrych Castle in Abergele, North Wales, at around 5pm on Saturday where the woman was pronounced dead.

The incident took place on a dark stretch of road with a 60mph limit near the Middle Gate entrance of the castle near where sightseers had reportedly been gathering.

The A547 was closed for more than 15 hours following the tragedy, a police investigation is ongoing.

A woman pedestrian has died following a fatal collision with a car outside the I’m a Celebrity castle in Abergele, North Wales

One local man said : ‘Barriers have been put up on pavements further down the road because of the expected influx of sightseers although they get a better view of the lit-up Gwrych castle from Pensarn beach where it’s also safer.

‘Where this happened is a dark section of road and there have been some nasty accidents before.’

He added : ‘There were some I’m a Celebrity fans outside the castle on Saturday night.

Gwyrch Castle where the  ITV reality TV show ‘I’m A Celebrity Get Me Out Of Here’ is being filmed in Abergele, Wales

‘But whether the show had anything to do with what happened, I don’t know. There is a private entrance into the castle grounds nearby.’

On social media there were claims that some fans were climbing walls to try to get snaps.

North Wales police said : ‘We are appealing for witnesses following a collision on the A547 Abergele Road near Llanddulas in which a woman has sadly died.

I’m A Celebrity at Gwrych Castle in Abergele North Wales. Pictured is footpath closures and 20 mph speed limit near to the entrance to the TV production site at the castle

It happened on a dark stretch of road with a 60mph limit. Ambulances had rushed to the scene.

‘We received a report at 5.06pm on Saturday of a collision involving a female pedestrian and a blue Volvo estate car at a location known as Middle Gate.

‘A woman from the local area was pronounced dead at the scene. The driver of the Volvo was left shocked, but uninjured by the collision.’

‘The road remains closed and will be for some time as we conduct our investigations.’

The coroner has been informed.