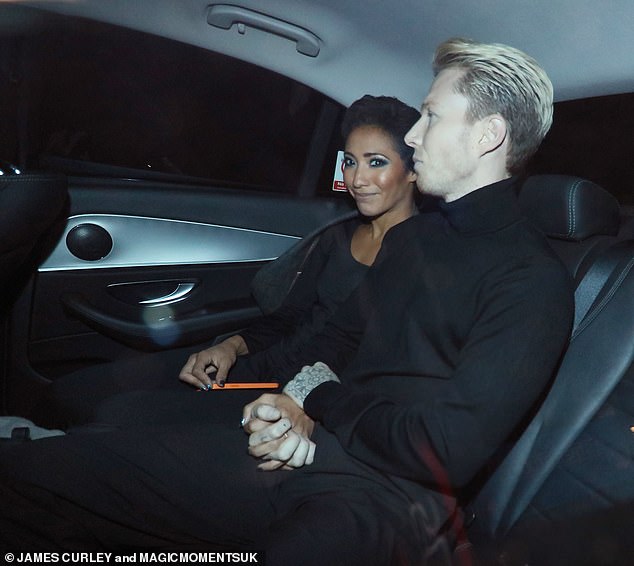 She has sailed through to the next round of the hit BBC show, and ‘punched’ partner Greg Wise with glee on hearing they were ‘safe’ for another week.

And, on Sunday evening Strictly Come Dancing star Karen Hauer, 39, smiled with relief as she left the show with her beau Jordan Jones Williams.

The couple looked loved up, holding hands with their fingers intertwined, while in a taxi heading home for the night after the latest Strictly result was revealed.

And breathe: On Sunday evening Strictly Come Dancing star Karen Hauer, 39, smiled with relief as she left the show with her beau Jordan Jones Williams

Karen and Greg, 55, were the bookies favourite to be booted out of the competition this week, and looked surprised when his name was announced as being ‘safe.’

The actor could be heard shouting after Karen punched him in the chest during the excitement of finding out they were through to the next round,

As the red light above them went out, Greg exclaimed: ‘Ow!’ as Karen giggled before the pair hugged, with Karen thanking viewers for their vote before blowing a kiss to their fans watching at home.

Punch gate: Karen had earlier ‘punched’ partner Greg Wise, 53, in the chest on realising they had made it to the next round

Speaking later in the show, Claudia Winkleman asked: ‘Greg what does it feel like being under those red lights waiting to hear your name?’

Claudia responded: ‘Let’s go with Thor. Karen, you were so happy my favourite thing was I heard you on your mic that you punched him. All we heard was Greg go “Ow!”,’ with Greg interjecting: ‘Bond does go “ow” a lot, but it’s always cut out.’

Claudia continued: ‘You must be over the moon?’ as Karen smiled and admitted: ‘I am. I’m sorry I punched you so hard, I really am.

‘And then I got my earring stuck on his shirt. But it was a relief. Really, I want to thank everybody at home for voting. Thank you so much.’

Licensed to thrill: The couple sailed through to the next round with their dance

End of the road: Former Coronation star Katie McGlynn and dance partner Gorka Marquez were dumped from the show on Sunday night

Karen recently described her ‘dream man’ as being ‘tattooed and blonde with blue eyes’, while discussing her dating life in an interview with the Sun in May.

Before meeting her fitness professional boyfriend Jordan this summer, Karen had ruled out dating anyone who was in the same profession as her.

Speaking to Hello the dancer had claimed she wanted to meet the man of her dreams away from her professional field.

‘No dancers, goodnight, bye! No more dancers,’ she shared, adding: ‘I hope they don’t dance, none of them.’

The ex: Prior to confirming her new romance with Jordan, Karen was in a two year relationship with David Webb (Pictured in February 2020)

Prior to confirming her new romance with Jordan, Karen was in a two year relationship with David Webb.

Karen was previously married to her co-star Kevin Clifton for three years between 2015 and 2018, before they split and he went on to date his dancer partner Stacey Dooley.

Before her union with Kevin, Karen was married to fellow professional dancer Matthew Hauer.

Former love: Karen was previously married to her co-star Kevin Clifton for three years between 2015 and 2018 (Picture in March 2018)