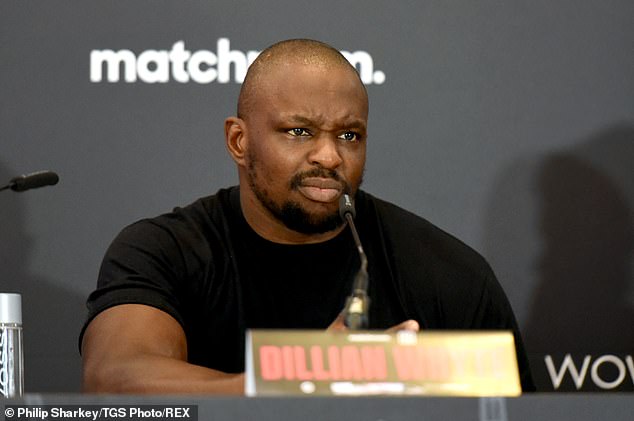 ‘You can never bank on anything he says’: Dillian Whyte fears Tyson Fury might decide to RETIRE instead of fight him as heavyweight hopeful claims physical toll of Deontay Wilder trilogy may stop all-British encounter


Dillian Whyte has cast doubt over a potential match-up with Tyson Fury early next year as the heavyweight hopeful warned that the Gypsy King may decide to retire instead of step in the ring again.

Whyte, 33, is in pole position to face Fury next following the Briton’s dramatic win over Deontay Wilder this month, with the WBC expected to order the all-British fight.

A bout in February is anticipated and will finally see Whyte have a crack at the heavyweight title, having been on the cusp of a shot for the past couple of years.

However, Whyte says that a fight with Fury is not a certainty and that the unpredictable Gypsy King may decide to hang up his gloves after his blockbuster trilogy against Wilder.

‘The Tyson Fury fight is a fight that I wanted, it’s a fight I tried to get before,’ Whyte said. ‘[It was] Mandated for belts and it didn’t happen. And fortunately for me now, it seems like it’s gonna go ahead.

‘But you can never bank on anything Tyson Fury says. because he might say, “You know what I’ve had enough I don’t want to fight anymore.” Or he might say, “I need a longer rest.”

‘He’s had three hard fights with Deontay Wilder. We don’t know how much they have taken out of him. So we’ll just have to wait and see.’

Whyte was set to face Otto Wallin at the end of this month but an injury to the Body Snatcher’s shoulder forced the fight to fall through. The 33-year-old said while his focus remains on healing up as quickly as possible, he would love for his fight with Fury to unfold in the UK.

‘It’s a major fight and one I’m looking forward to. I think Tyson Fury will look forward to fighting me as well. It’s a big fight.

‘But I think, logically, he’ll think, “This a good fight. It’s a good homecoming fight and it should happen.” So let’s see.’