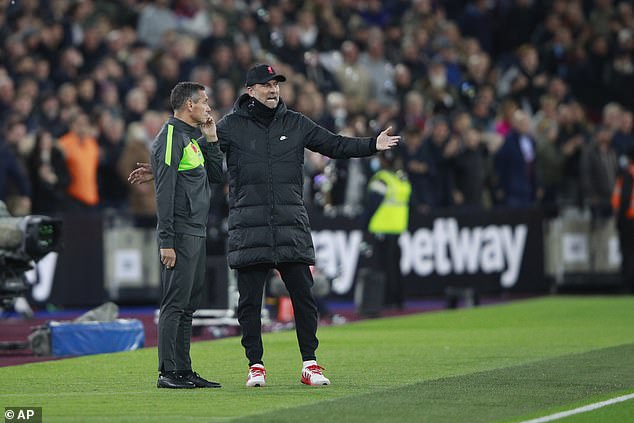 
Jurgen Klopp laid the blame for Liverpool’s first loss of the season squarely at the door of referee Craig Pawson as West Ham stormed into third place.

Anfield boss Klopp was left fuming at two majorly influential decisions as his team lost for the first time since the Champions League defeat against Real Madrid on April 6 – a total of 26 matches.

The German believed the Hammers’ opener – that came direct from Pablo Fornals’ corner – should have been chalked off, claiming Angelo Ogbonna impeded goalkeeper Alisson, scolding Pawson for relying on VAR to make the decision.

Klopp also said Pawson was wrong not to send off Aaron Cresswell for a particularly dangerous tackle on Jordan Henderson.

‘I think it’s a clear foul on Alisson, the arm from Ogbonna is here. The referee made it easy for himself and said ‘that’s see what the VAR is saying’.

‘They said not clear and obvious – I don’t know why – which is really strange. It’s not man marking, it’s blocking the goalkeeper.

‘People will say I’m looking for excuses, I’m not. I accept we’re not too good to lose football games. Today we lost it, that’s not nice but I accept it. But when we speak about situations in a game you just need normal decisions from a referee. He didn’t do that.

VAR reviewed the incident but allowed the goal to stand, despite Liverpool players’ protests

‘The way I saw it (the Cresswell tackle on Henderson), it was a clear red card. No discussion possible. You cannot go like this into a challenge.

‘But we cannot make these decisions obviously and I didn’t know what the ref would say now, but in the game he looked confident his decisions were correct. It’s all about the ref.’

When asked if referees were becoming too reliant on VAR, Klopp answered: ‘Not all refs, but he [Pawson] does. It’s just the situation, he did that today definitely.’

Czech businessman Daniel Kretinsky, who is close to agreeing a deal to buy a stake in West Ham, was in attendance as the Hammers recorded a breathless victory to move just three points adrift of leaders Chelsea.

And he’d have been encouraged by what he saw as David Moyes’ men produced a performance bursting with quality and cutting edge.

‘I remember when I came everyone said the London Stadium was not the same,’ said Moyes.

‘Everyone in football knows if you can get a team winning and trying every game you will get supporters backing you wherever. The supporters backed us today.

‘This is a really good stadium for us, we are benefiting now. Everyone was questioning if the (lack of) supporters was why West Ham was doing well (during last season) but we’ve disproved that.

‘We all have to try and keep improving. I hope and believe my best time is still to come and at the moment I’ve got really good players who play with incredible character.’