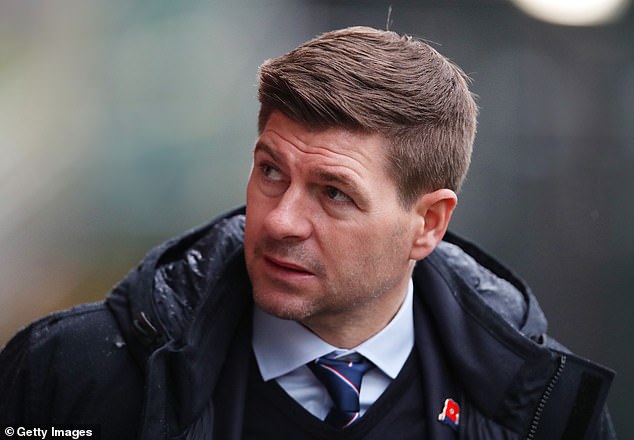 
Jamie Carragher believes Steven Gerrard would face a ‘difficult’ decision if Aston Villa were to offer him the role as their new manager.

Villa sacked Dean Smith after their 1-0 loss at Southampton on Friday. The result leaves the club sitting 15th in the Premier League table on a miserable run of five straight defeats.

Carragher believes ‘Aston Villa as a club would be a great move for Gerrard’ but says he understands the difficulty of leaving Scottish Premiership champions Rangers in the middle of the season.

Speaking to Sky Sports, Carragher said: ‘I think Aston Villa as a club would be a great move for Steven Gerrard.

‘But the situation he finds himself in right now is that he took the title away from Celtic last season, and he’s in a great position to win it again.

‘I think in a perfect world you’d want to stay at Rangers to the end of the season and come away from there with two titles.

‘I think sooner or later there’s going to be a great chance Steven Gerrard is going to come to the Premier League. But for me, it’s a difficult one.

‘If he got offered the Aston Villa job, I don’t think there’d be many jobs in the Premier League which he would get offered better than that.

‘People talk about Liverpool, and that might be another two or three years with Jurgen Klopp but you’re not going to get any jobs better, so it would be a decision for him.

‘But, in a perfect world, I think Steven Gerrard wants to come away from Rangers with another couple of trophies.’

Gerrard is reportedly admired by key figures in the Villa hierarchy, who are impressed by the job he has done at Rangers.

After taking over at Ibrox in 2018, the 41-year-old won the Scottish Premiership title last season

After taking over at Rangers in 2018, the 41-year-old won the Scottish Premiership title last season, breaking Celtic’s sequence of nine in a row, and reached the last 16 of the Europa League.

This term, Gerrard’s men are top of the Scottish Premiership of the table, although they were eliminated by Malmo in the qualifying rounds of the Champions League.

However, the former Liverpool and England captain is under contract at Ibrox until 2024 and could be reluctant to leave the club halfway through the campaign.