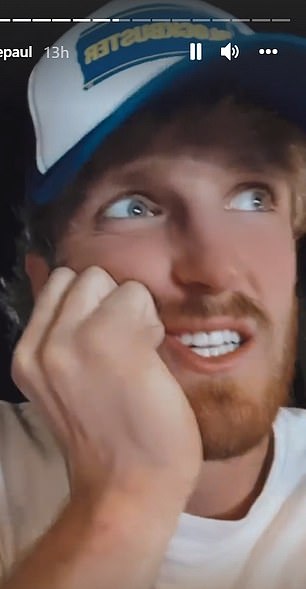 
Jake and Logan Paul have shared a video mocking Tyson and Tommy Fury after the world heavyweight champion began training his younger brother.

Tommy will take on Jake on December 18 in Florida in what is expected to be the YouTuber-turned-boxer’s most difficult fight to date.

He has his brother, WBC champion Tyson, to train him and they shared footage of a running session along Morecambe beach on Monday.

The Gypsy King spoke about how pleased he was with his first session as trainer and his younger brother chimed in, saying he was ‘feeling good’.

The Paul brothers then put on their best British accents to recreate that video while in the car.

Logan said: ‘Really happy with myself as a trainer, happy with how things went this morning, Jake how are you feeling?

His older brother asked: ‘Jake, how are you feeling? And what’s gonna happen to Tommy Fury?

Tyson, 33, is clearly invested in Tommy’s success because he does not want the family name tarnished with an embarrassing defeat.

The heavyweight champion, who recently knocked out Deontay Wilder in their trilogy fight, previously joked that his younger sibling would have to change his name if he loses.

Having started fight camp on Monday, Fury shared the video of him and his brother putting in some road work and then assessing the session in a local cafe.

Tyson said: ‘Just finished my first day as a trainer. First morning session rather. Really happy with myself for the way things went.

‘All the boys trained hard. How was it Tommy? How you feeling?’

Tommy will face Paul in an eight-round bout in Tampa, Florida on December 18

To which Tommy replied: ‘You’re getting knocked spark out. Two rounds.’

The Gypsy King then remarked: ‘Jake Paul, we’re coming for you.’