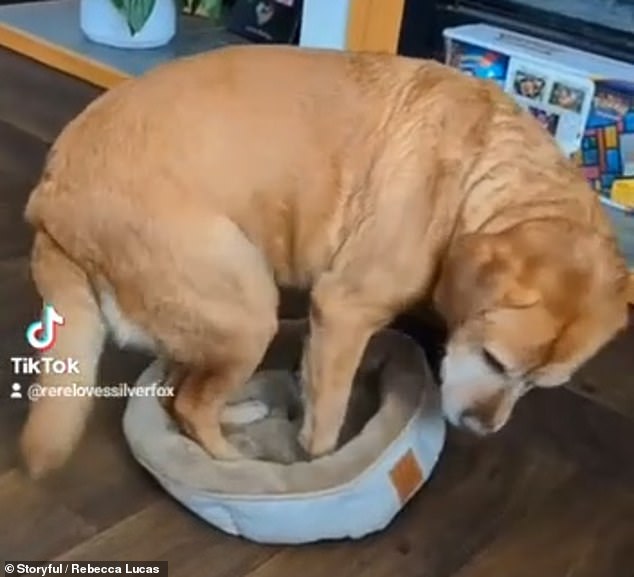 By Kaya Terry For Mailonline


This is the hilarious moment a large yellow Labrador squeezes himself into a cat bed as his owner watches in disbelief.

Rebecca Lucas, of Springfield, Oregon, took the video of her eight-year-old Labrador, Bailey, attempting to fit into a tiny cat bed by curling himself into a tight ball – just to avoid sleeping on the hardwood floor.

The footage, which was posted on TikTok on November 7, shows Ms Lucas’s other dog, a black and tan chihuahua, circling the tiny bed as if looking to squeeze in too.

Rebecca Lucas, of Springfield, Oregon, took the video of her eight-year-old yellow Labrador, Bailey, squeezing himself into the cat bed to avoid sleeping on the hardwood floor

The footage, which was uploaded to TikTok on November 7, shows Bailey desperately trying to make himself fit inside the fleecy bed, leaving no room for Ms Lucas’s other dog, a black and tan Chihuahua (right)

The video, which has since garnered 2.5million views on TikTok, shows Bailey adorably sizing up the cat’s bed before curling himself up tightly to avoid touching the floor.

Ms Lucas’s Chihuahua is seen trying to creep in before the Labrador sits down, but there is not enough room, so he hilariously accepts defeat and goes off.

Ms Lucas said he had just moved house to a place with hardwood floors and Bailey wasn’t a fan.

Despite both dogs having a big bed each of their own, Bailey decided to improvise rather than leave the room.

She said: ‘He doesn’t like it because he’s been used to carpet his whole life.

‘The floors are not cold and he has his own big bed that we usually bring upstairs when we decide to hang out up there.

‘At the time this video was taken his bed was still downstairs so he improvised’.

Ms Lucas admitted that Bailey has a huge bed of his own, Bailey decided to improvise and try the cat’s bed for size

The video, which has since garnered 2.5million views on TikTok, has been praised by social media users with one commenting: ‘This is hilarious!’

Replying to a comment on TikTok, Ms Lucas added: ‘He’s not picky about what bed or couch he sleeps on. He’s picky about floors.

‘They each have their own bed. This is for the cat.’

One social media user wrote: ‘Mom you shrunk my bed in the dryer again!!!’

Another wrote: ‘But he fits perfectly!’

One user wrote: ‘This is hilarious! They are both trying SO hard to make it work.’