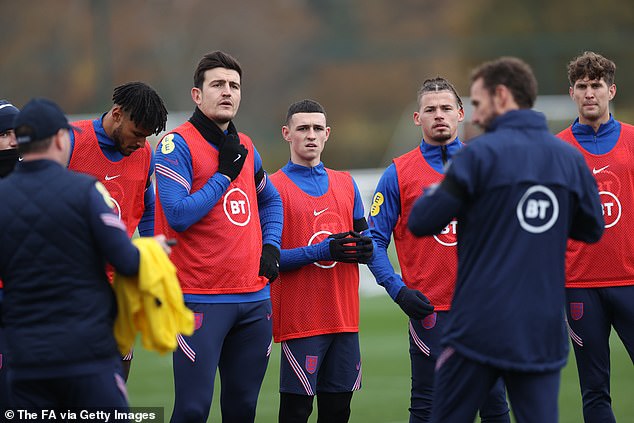 
England players will discuss whether to publicly protest against Qatar’s distressing human rights record once World Cup qualification is secured on Monday night.

With a little over a year to go until Qatar 2022, the Middle Eastern nation’s treatment of migrant workers building infrastructure including stadiums for the tournament has been fiercely criticised.

Over the weekend, the Mail on Sunday revealed that the state is sending immigrant World Cup workers away from the country early and placing them on five months’ unpaid leave so they will not be visible during the tournament.

The Holland, Norway and Germany national squads have all made high-profile protests ahead of the tournament — and Gareth Southgate’s team are under pressure to follow suit.

And it was revealed on Sunday that the players will discuss how they can air their views once passage to Qatar is sealed on Monday in San Marino, where England need just a point against the world’s worst side.

Conor Coady, who is part of the England squad’s leadership committee, said: ‘Obviously we are seeing quite a lot in the news at the minute — but we’ve always said that we make sure we do our job first.

‘We make sure we try to get to that competition as quickly and as positively as we can and then I’m sure the conversation will be had with the players.

‘An incredible thing that comes out of this England squad is that people try to make a difference all the time. People are trying to use that platform. If there is any way players can help, I am sure we as part of the England setup will try to do that.’

England players have led the way on taking the knee to raise awareness against discrimination and will consider what action to take in relation to Qatar.

‘At the minute it is tough to speak about it because it is not something we have had a real conversation about,’ added Wolves defender Coady.

‘Over the next few months it’s something we’ll have a conversation about, as players, as a team, as individuals and really look at what’s going on.’