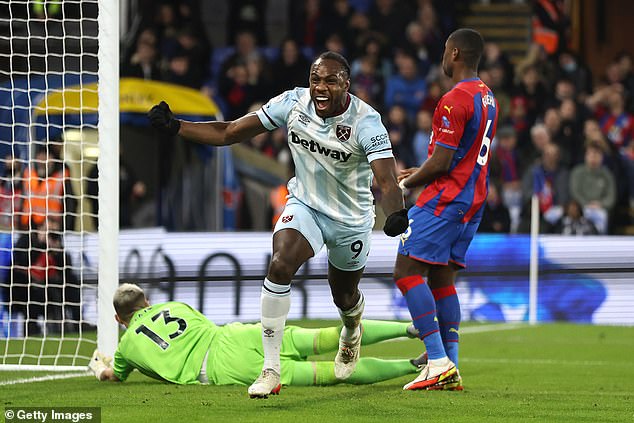 
West Ham striker Michail Antonio has been rewarded for his fine form this season with a new contract extension.

The 31-year-old has signed a new contract that sees him commit his future to the Hammers until summer 2024, with the option of another year.

Antonio has been a revelation since arriving in east London from Nottingham Forest in 2015, scoring 55 goals for West Ham.

The Jamaica international has enjoyed a fine season so far, scoring nine goals and providing six assists in the opening half of the campaign.

His return of 10 goals in 26 outings last season helped David Moyes’ men secure Europa League qualification, and he is already on course to better that tally this term in just 19 appearances so far.

The club confirmed the deal on Friday with a statement that read: ‘Everyone at the club is pleased that Michail has agreed to extend his stay at London Stadium and looks forward to many more goals, assists and celebrations in the future.’

Manager Moyes, via The Athletic, said: ‘We’ve extended one or two contracts behind the scenes.

‘We did Michail’s contract about two months ago, but we’ve also done another couple of players.

It has only been 13 months since the Wandsworth man last penned an extension, which tied him down until the summer of 2023.

But West Ham had the option to extend that deal and, as they eye an unlikely route into next season’s Champions League, that is exactly what they have done.

Despite agreeing his own new deal, Antonio has called for the Hammers to bring in some competition for him up front at the London Stadium

‘One thing that we definitely need is a striker,’ Antonio said on the Footballer’s Football Podcast on Thursday.

‘I like a challenge, I always want my shirt and want to play. We’ve got quite a few injuries at the back, we’ve lost Kurt [Zouma], Angelo [Ogbonna] and Cress [Aaron Cresswell], so we must be looking at centre-halves as well.’

Digne, who has been linked with moves to Chelsea and Newcastle in January, appears set to leave Goodison Park amid a fallout with manager Rafa Benitez.

West Ham are one of several clubs vying for his signature, while a new striker to provide backup for Antonio is also believed to be a priority.