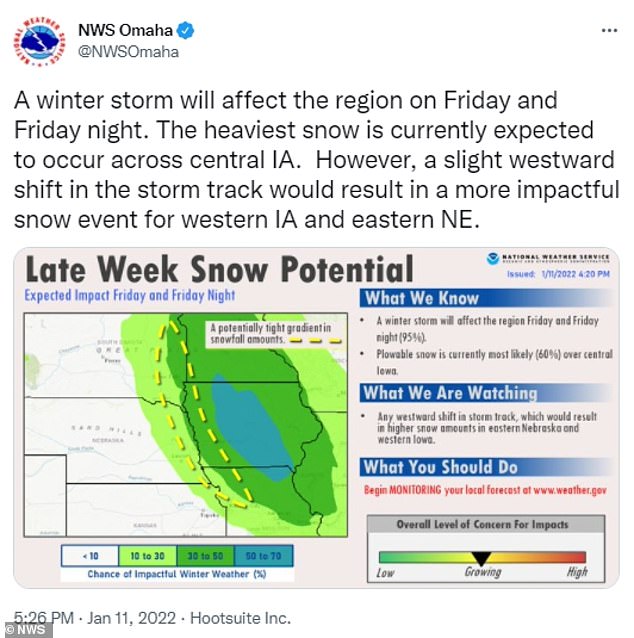 A rare winter storm could bring snow and icy conditions to the South before moving into the Northeast over the MLK weekend.

The storm is currently located in the Pacific Ocean and will move to Arkansas, Mississippi, Tennessee, Georgia, the Carolinas, Virginia and into the Northeast.

In the Appalachian and Eastern Seaboard, it will most likely bring rain and ice due to ‘ample uncertainty’, the Weather Prediction Center (WPC) warned, while Atlanta could see its first significant snowstorm in four years.

The WPC said that what their snow prediction, last updated on Wednesday, could actually present as sleet or freezing rain during the weekend in certain areas.

Treacherous roads, hazardous travel, significant power outages and wind gusts over 40mph caused by ice storms are expected in the Southeast and up the East Coast, CNN reported.

Certain aspects of how the winter storm will develop are unpredictable, as it still has 3,000 miles to travel before impacting the eastern US over the weekend.

‘It should be stressed that the energy leading to this storm system is still in the data-poor Pacific Ocean at this time, and model and forecast changes, perhaps large, could still occur,’ the WPC said on Wednesday.

By late Thursday and Friday, snow is expected to hit the Upper Midwest.

‘This next storm system is primed to produce heavy snow and will result in treacherous travel conditions across parts of the Northern Plains and Midwest to close out the work week,’ warned the WPC.

South Dakota, Minnesota and Iowa are expecting several inches of snow and wind gusts over 25mph.

‘A winter storm will affect the region on Friday and Friday night. The heaviest snow is currently expected to occur across central IA. However, a slight westward shift in the storm track would result in a more impactful snow event for western IA and eastern NE,’ the National Weather Service (NWS) said on Thursday.

Before the snowstorm hits the South over the weekend, it’s expected to arrive in Missouri and Arkansas on Friday.

In Nashville, a wintry mix of rain and chances of snow is possible.

‘This event certainly has the potential to change, perhaps amounting to no accumulation at all or perhaps producing a bit more than an inch or 2, so stay tuned,’ Nashville NWS said.

Meanwhile, Atlanta could see its first significant snowstorm in nearly four years if the winter storm travels deep into the South across Mississippi, Alabama and Georgia.

‘It has been 1,454 days since the last time our Atlanta site has seen measurable snowfall, good enough for the 2nd longest streak on record,’ the NWS in Atlanta said on Thursday.

‘Our last measurable snow occurred on January 18th, 2018, nearly 4 years ago. Needless to say, we are watching this weekend closely.’

However, the prediction at this time could simply turn into drizzle by the time the winter storm hits Atlanta on Saturday.

The Carolinas and eastern Tennessee will most definitely see snow, while ice is still a possibility, especially in the Carolinas.

‘There is an increasing risk of a significant winter storm impacting the East Coast later this weekend into early next week. Although considerable uncertainty remains, so continue to monitor future forecast updates,’ the NWS said.

The storm will continue its path to Virginia late Sunday and Monday.

‘As is so often the case with these storms, the track, as well as warm air aloft, are going to be key in who gets an all snow event versus who gets a wintry mix and who may even just get a plain cold rain,’ the NWS in Washington, DC, said.

More snow in Virginia and Washington is expected in the case the winter storm travels closer to the coastline, while a wintry mix is most likely to happen if the storm stays inland.

Cities up the East Coast would also see rain in the event the storm stays inland.

Weather predictions on how the storm is expected to unfold will change as it makes its way across the US, meteorologists warned, but snow, ice and sleet are a possibility in the areas affected.