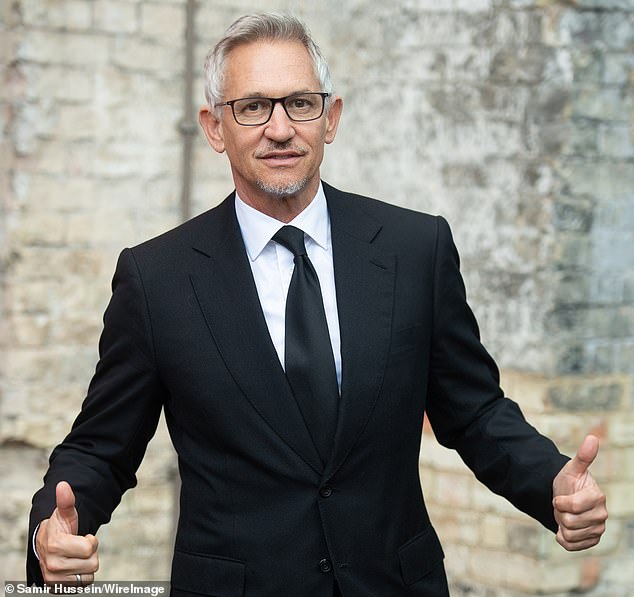 Gary Lineker has today admitted he was ‘wrong’ about John Bercow after facing backlash for lavishing praise on the Speaker who he called ‘principled’ and a ‘difficult act to follow’.

The BBC football pundit made the comment in response to a Spectator article titled ‘Eight embarrassed Bercow backers’, which was shared by Andrew Neil on Twitter.

The story referenced a tweet made by Lineker in September 2019, praising Mr Bercow after he announced his intention to stand down as Commons Speaker.

He wrote at the time: ‘A principled man and a difficult act to follow. Well played, John Bercow.’

The latest comments come after an independent inquiry said that Mr Bercow, who switched allegiance from the Conservatives to Labour last year, would have been expelled from the House if he was still a sitting MP after upholding 21 separate allegations, branding him a ‘serial bully’.

Gary Lineker (pictured last September) made the comment in response to a Spectator article titled ‘Eight embarrassed Bercow backers’, which was shared by Andrew Neil on Twitter

The story referenced a tweet made by Lineker in September 2019, praising John Bercow (above) after he announced his intention to stand down as Commons Speaker

Lineker has faced criticism for his previous tweet supporting Mr Bercow, with one social media user writing: ‘Yep, a principled man who has been found guilty of bullying and banned from Parliament for life.

‘Lineker proving to be a poor judge of character.’

Another wrote: ‘John Bercow suspended for being a bully. Is that the same John Bercow who Gary Lineker said was a principled man and a difficult act to follow?’

And a third added: ‘This is the same Bercow that Gary Lineker said was a principled man and a difficult act to follow!’

But retweeting veteran broadcaster Neil’s post, the presenter wrote: ‘Not embarrassed in the slightest. I’ve been mistaken many times.

‘Was clearly wrong about Bercow, and bullying is awful and never acceptable. We all make misjudgements about people or things… don’t we, Andrew?’

Similarly, Labour’s David Lammy has insisted he is not embarrassed over previously describing Mr Bercow as an ‘inter-galactic hero’.

The shadow foreign secretary said he believes the remark, made in 2019, was not a mistake however, despite the independent inquiry.

Mr Lammy tweeted in September 2019: ‘John Bercow is an inter-galactic hero. In this noisy world of moneyed oafs belching their jingoism, he brings style, civility, and Shakespearean rhyme. A true freestyler.’

Mr Bercow has been handed a lifetime ban from holding a parliamentary pass but he has refused to apologise.

Retweeting veteran broadcaster Neil’s post, Lineker wrote that he is ‘not embarrassed in the slightest but ‘was clearly wrong about Bercow’

He described the investigation as a ‘travesty of justice’ before refusing to make any ‘faux apologies’, insisting he has nothing to say sorry for.

Mr Bercow had appealed against the findings by Parliamentary Standards Commissioner Kathryn Stone to the Independent Expert Panel, which determines bullying sanctions.

But the experts upheld her verdicts on the allegations from three complainants, who were staff during the period 2009 to 2014, without exception.

The panel, chaired by former appeal court judge Sir Stephen Irwin, said: ‘The findings of the Parliamentary Commissioner for Standards, which we have upheld, show that the respondent has been a serial bully.

‘His evidence in the investigations, the findings of the commissioner, and his submissions to us, show also that the respondent has been a serial liar.

‘His behaviour fell very far below that which the public has a right to expect from any Member of Parliament.’

Mr Bercow disputed the findings and insisted there is no reason for him to apologise.

Following the suspension, a spokesman said there is a ‘zero-tolerance approach’ to bullying in the Labour Party.

A spokesman for leader Sir Keir Starmer told reporters: ‘The Labour Party has got a zero tolerance approach when it comes to bullying.

‘I’ve got nothing further to add to what was said yesterday, in terms of the party looking at this and suspending John Bercow.’

Asked why Mr Bercow had not been immediately expelled, he replied: ‘I can’t comment on individual cases.

‘You’ll appreciate that in all of these disciplinary matters, there is a due process that needs to be followed, and that will be applied in this case.’