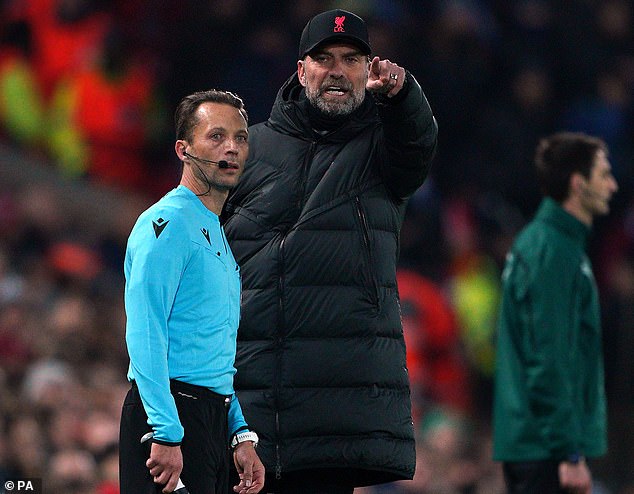 Liverpool’s Champions League clash with Inter Milan is halted in the first half after ANOTHER medical emergency in the crowd, with Jurgen Klopp alerting official before doctors sprint to assist

Liverpool and Inter Milan’s Champions League clash was briefly stopped on Tuesday night when a fan was taken ill in the stands at Anfield.

The last-16 second leg came to a halt in the 25th minute on Merseyside, with Reds manager Jurgen Klopp seen on the touchline alerting match officials to a medical emergency in the Kop.

Referee Antonio Mateu Lahoz then put the game on hold as medics from both benches sprinted across the pitch to begin treating the fan in question.

It is the second time a high-profile match involving an English team has been stopped in the past three days, as Manchester City and Manchester United’s Premier League encounter at the Etihad was also halted due to an emergency in the crowd on Sunday.

City soon confirmed a supporter had been taken to hospital after collapsing in the stands, where they have since been recovering.

At Anfield, Liverpool and Inter stars headed over to their respective dug-outs for a drinks break while awaiting the green light to resume play, and around three minutes later they were able to do so.

Medics received a standing ovation from all four sides of Anfield as they returned to their benches, before Lahoz got the match back underway.

In the end Liverpool were beaten on their home turf, but they held on by the skin of their teeth to reach the quarter-finals of the competition.

Having claimed a 2-0 win in last month’s first leg at the San Siro, Klopp’s men appeared in a strong position to comfortably book their place in the last eight.

However, Inter were the better side for large periods of the evening, and just after the hour mark they gave the hosts a huge scare when Lautaro Martinez rifled a sensational long-range effort into the top-right corner.

That was before Alexis Sanchez earned himself a sending off two minutes later, picking up a second yellow card for a late challenge on Fabinho which has divided opinion.

Following Sanchez’s dismissal, Inter were unable to build on the momentum from Martinez’s strike and Liverpool instead held on to progress to the next round.