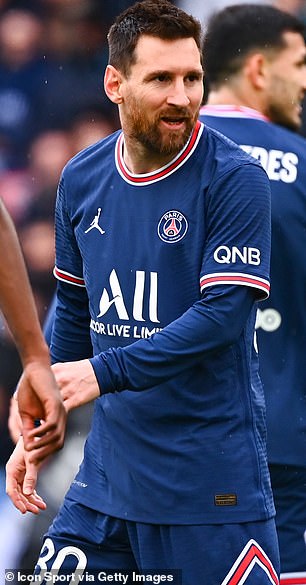 Cesc Fabregas and Luis Suarez have both leaped to the defence of former team-mates Lionel Messi and Neymar after they were booed by Paris Saint-Germain supporters.

The French outfit returned to winning ways on Sunday as they thrashed Bordeaux 3-0 thanks to goals from Kylian Mbappe, Neymar and Leandro Paredes.

But PSG supporters were still seething from their Champions League elimination and they made their feelings clear.

Messi and Neymar were both booed and whistled by the supporters, with the Brazilian even getting jeers after making it 2-0.

Former team-mates Luis Suarez and Cesc Fabregas both took to social media to show their support for the pair.

Atletico Madrid’s Suarez posted on Instagram: ‘As always #footballwithoutmemory, always with you. Love you both so much.’

Luis Suarez (left) has leaped to the support of his former Barcelona team mates (centre, right)

Football has no memory whatsoever… it’s a shame. Always with you brothers 🙏🏻

Fabregas also shared the same feelings. He Tweeted: ‘Football has no memory whatsoever… it’s a shame. Always with you brothers.’

Suarez enjoyed plenty of success with Neymar and Messi during their years in Barcelona – notably when they won the treble in the 2014-2015 campaign.

Fabregas came through the famous La Masia academy with the Argentine and played with him from 2011 to 2014. He also linked up with Neymar in the 2013-2014 campaign before departing for Chelsea.

Despite their exit from Europe, Mauricio Pochettino’s side are on course to win Ligue 1 after extending their lead at the top to 15 points with Sunday’s win.