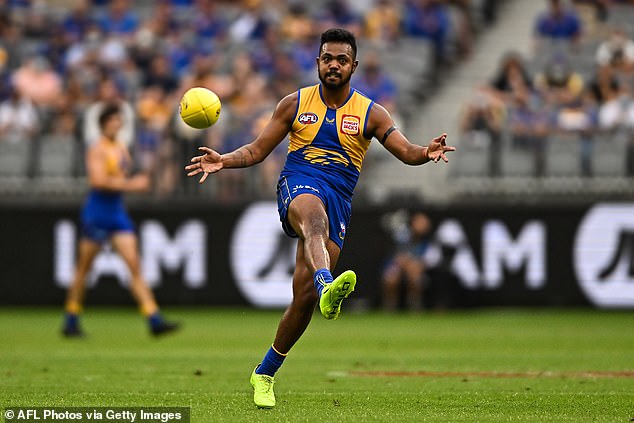 The AFL has decided against appealing Willie Rioli’s tribunal verdict, even though the league does not agree with the decision to clear the West Coast forward.

West Coast’s overturning of the rough conduct charge is the first tribunal controversy of the season and there were calls on Wednesday for the league to appeal it.

But the league doubts an appeal would succeed.

‘The AFL closely monitored the hearing and scrutinised the reasons of the tribunal in this decision,’ the league said in a statement.

‘While the AFL does not agree with the outcome of the hearing, it accepts the decision and confirms it will not appeal.

‘Due to the nature of the relevant appeal grounds available to it, the AFL considers that the prospects of a successful appeal in the circumstances are low.

‘The AFL considers that bringing an appeal without reasonable prospects of success is not an appropriate course for it to take.’

The AFL added it remains ‘strongly committed’ to reducing head-high contact in the game.

Experienced Eagles tribunal advocate David Grace QC had a big win at the tribunal on Tuesday night when he successfully argued that Rioli’s rough conduct charge should be overturned.

However, the Tribunal overturned an initial one-match suspension handed against Rioli

Rioli originally received a one-week ban for cannoning into Matt Rowell as the Gold Coast young gun went for a mark.

Grace invoked Nick Riewoldt’s iconic 2004 mark, arguing that Rioli was going for the mark as well and that ‘screamers’ would be effectively taken out of the game if players were charged for rough conduct in these sorts of circumstances.

Rioli jumped into the air and collected Rowell, who had his arms out to take the mark and was in a vulnerable spot.

‘Incidents such as this, where the question revolves whether and how the player is contesting the ball, are not easy,’ said tribunal chairman Jeff Gleeson.

‘This tribunal will be astute to uphold any charge where a player was initially intending to contest the ball, but changed that intention and in doing so, breached his duty of care.

While the AFL disagreed with the ruling, they found the chances of overturning the decision unlikely

‘That is not this case.’

‘Very upset with that decision. Unfortunately bracing for contact in a contested game comes with a price now. Although, I appreciate the tribunal considering our case!,’ Robinson tweeted.

Adelaide captain Rory Sloane also had his one-game ban for making contact to the eye region downgraded to a $2000 fine.

St Kilda made a written submission to the tribunal about Dougal Howard’s $3000 rough conduct fine, but it was upheld.