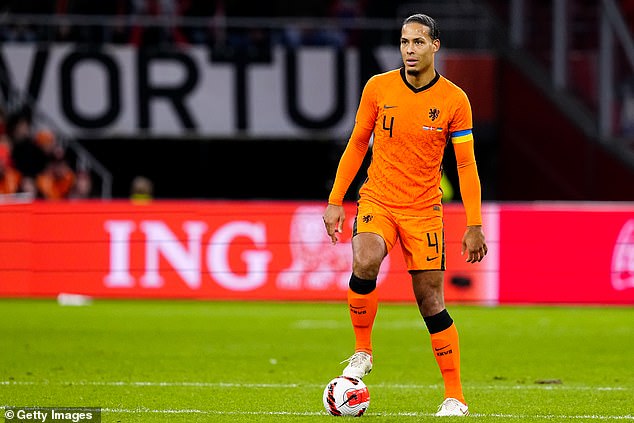 ‘I’m still in favour of 4-3-3’: Liverpool star Virgil van Dijk questions the tactics of Holland boss Louis van Gaal… despite featuring in win over Denmark as they continue an eight-match unbeaten run under veteran

Virgil van Dijk admits he thinks Holland are playing the wrong formation under Louis van Gaal, despite playing the full 90 minutes in his side’s 4-2 win over Denmark on Saturday.

The Liverpool defender featured centrally in a back-three as Oranje lined up in Van Gaal’s favoured 3-4-1-2 system during the triumph at the Johan Cruyff Arena in Amsterdam.

The friendly was most notable for Christian Eriksen scoring with his first touch in a Denmark shirt since his horrific on-pitch cardiac arrest at last summer’s European Championship.

Yet victory ensured Holland remained unbeaten under the former Manchester United manager who is in his third spell as national team coach following runs between 2000 and 2001 as well as 2012 to 2014.

Since taking charge after Euro 2020 last summer, Van Gaal’s side have won six of their eight matches in an impressive unbeaten run.

Holland twice took the lead in Amsterdam, with Steven Bergwijn and Nathan Ake netting either side of a 20th minute Jannik Vestergaard equaliser.

Memphis Depay handed the Dutch a third goal with a 37th minute penalty before Eriksen pulled a goal back at the start of the second half.

Tottenham star Bergwijn made the result safe with his second goal 19 minutes from the end.

While Van Dijk believes there are many positives to take, there is still much to improve as he admitted he would rather play in a 4-3-3.

‘Until today we have been training hard, with lots of tactics and meetings. There are good times but also things to improve,’ the Liverpool defender told NOS, via footmercato.

‘We will analyse this. Of course, we are playing in a new system, different things are required of the players. But I think we showed a lot of good things.

While Van Gaal’s side are unbeaten, they have arguably yet to face a serious test having won other games against Montenegro, Turkey, Latvia, Gibraltar and Norway.

However those tests are due to come in the next few fixtures starting with a friendly against fierce rivals Germany on Tuesday in the Dutch capital.

That will precede the Nations League in June, where Holland are drawn in a group also featuring Belgium, Wales and Poland.