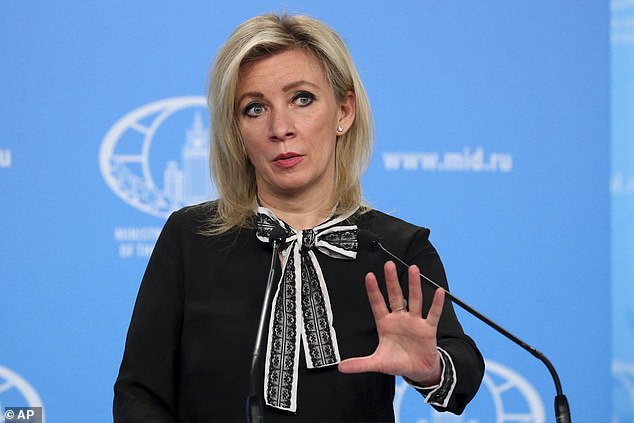 Putin’s deranged regime branded Latvia a ‘neo-Nazi’ state in a chilling echo of Moscow’s threats to Ukraine after the Baltic state made May 9 a day of remembrance for victims of Russian aggression.

In an extraordinary rant, Moscow called Riga’s decision to commemorate Ukrainian war victims next month – on the same day as Russia’s Victory Day to mark the surrender of Nazi Germany – ‘blasphemous’.

Latvian MPs passed the legislation to draw attention to ‘ Russia’s military aggression’. Latvian national flags will be raised alongside Ukrainian flags at every residence and government building.

According to Kremlin-backed media, Russian Foreign Ministry spokeswoman Maria Zakharova called the decision ‘an attempt to humiliate the Russian-speaking community living in Latvia, which cherishes the memory of the exploits of anti-fascist heroes’.

Maria Zakharova (pictured), the Director of the Information and Press Department of the Ministry of Foreign Affairs of the Russian Federation, called it ‘an attempt to humiliate the Russian-speaking community living in Latvia’

The Latvian Seimas passed the legislation to draw attention to ‘Russia’s military aggression’ and will adorn national flags with black ribbon, which will be raised at every residence and government building. Latvian national flags will also be raised alongside Ukrainian flags at the Riga Castle, Saeima building and the Cabinet of Ministers building

The Russian Foreign Ministry has heavily criticised Latvia’s decision to commemorate Ukrainian war victims on May 9 and branded it ‘blasphemous’ – as it is the same day Moscow holds its annual Victory Day parade to mark the Nazis surrender in WWII. Pictured: Victory Day parade in Moscow, 2021

She added: ‘The blasphemous decision of the Latvian parliamentarians is subject to strong condemnation by all sensible forces not only in Russia, but throughout the world.

‘At the same time, this legislative act is not surprising, since the ruling regime in Latvia has long been well known for its neo-Nazi preferences and attempts to whitewash the atrocities of Nazi Germany ‘s henchmen.

‘Just as Riga in every possible way covers the crimes of the Kiev regime against civilians in Ukraine and Donbas. We are convinced that that history will put everything in its place.’

The bill will also not allow the organisation of any public celebrations and says there will be no issue of permits for public events.

It comes as a former senior officer in the Russian army laid out a battle plan on state TV which includes the Russian army invading the NATO Baltic states and parts of Sweden, a politically neutral country.

Colonel Igor Korotchenko, formerly of the Russian General Staff and air force and currently a reserve officer, outlined on TV channel Rossiya 1 how a Russain invasion of the Baltic states might look

The map shows a plan where Russian forces would push up from Kaliningrad and close the Suwalki corridor separating Poland and Lithuania, blocking NATO reinforcements

Pointing a the map, Colonel Igor Korotchenko, formerly of the Russian General Staff and air force and currently a reserve officer, said at the start of the invasion ‘a massive Russian radio-electronic strike is inflicted’ as ‘all Nato radars go blind and see nothing’, according to the Sun.

This was how the scenario for capturing the countries might look, he added.

Sweden has been politically neutral throughout its recent history, but Russia’s invasion of Ukraine brought the prospect of the Nordic country joining NATO to the fore of political discussion.

Russia has threatened Sweden and Finland over NATO membership repeatedly since the invasion began.

In the video, a border area labelled the ‘Suwalki gap’ is shown – the gap between Belarus and Russia’s Kaliningrad exclave, a leftover territory annexed from Germany after the Second World War.

Colonel Korotchenko explained how Russia would push up from Kaliningrad towards the Suwalki corridor separating Poland and Lithuania, blocking NATO reinforcements from the West.

NATO forces take part in the Cold Response drills in Norway, which happen every two years

‘The astonished West and NATO will know that Russia declares a no-fly zone of 400km,’ added the enthused Colonel.

The entire Baltic Sea would then by open to Russian forces, he said on live TV.

The scenario ends with the new Baltic states governments pledging allegiance to Moscow while Sweden agrees to perpetual neutrality and a 99-year lease on Gotland.

The program went out on Russian television as the end of last year but was posted by Ukrainian government advisor Anton Gerashchenko.

Meanwhile, President Vladimir Putin hopes to have a battlefield win in eastern Ukraine within the next month so he can celebrate it on Russia’s annual Victory Day parade in Moscow.

US officials said the alleged war criminal wants to coincide a victory with the parade in Red Square on May 9.

The Yars mobile intercontinental ballistic missile launcher moves to Red Square during the military parade marking the 75th anniversary of the victory in the Great Patriotic War on June 24, 2020 in Moscow, Russia

Russian service members march during a military parade on Victory Day, which marks the 76th anniversary of the victory over Nazi Germany in World War Two, in Red Square in central Moscow, Russia May 9, 2021

They said it could explain why the Russian despot’s forces have pulled back from the Kyiv region to concentrate on the east of Ukraine after weeks of fighting, The Times reported.

It is likely Putin thinks a battlefield win in the Donbas region in the east of Ukraine is more realistic because more of the existing Ukrainian population there is pro-Russian.

Officials also think the relocation of Russian troops could be in anticipation of warmer weather that will make it harder to move tanks and armoured vehicles through the Ukrainian countryside.

They believe if Russia focuses on the east of Ukraine, Putin’s forces could remain there for a number of months.

Ukrainian officials also think the Victory Day parade will be central to Putin’s Plan B for the invasion, after the Russian tyrant’s original strategy failed.