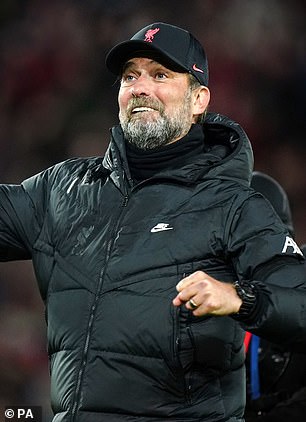 ‘I feel a little bit for him’: Jurgen Klopp admits he has sympathy for Ralf Rangnick after difficult period in charge at Man United… but Liverpool boss says great rivals ‘will sort their situation’

Jurgen Klopp has expressed his sympathy for Manchester United interim boss Ralf Rangnick after what has been a difficult five months at the helm at Old Trafford.

Having been given the top job until the end of the season following Ole Gunnar Solskjaer’s sacking in November, United are out of all the cup competitions and look unlikely to finish in the Premier League top four.

Klopp’s Liverpool beat United 4-0 in midweek and speaking to Jamie Carragher in an interview with Sky Sports, the German admitted he ‘felt a little bit’ for his compatriot Rangnick, a coach who was Klopp’s mentor.

‘We all know the first good news I think for the United people is that Erik ten Hag is agreed now, and the future starts now already. But they have to get through this season as well,’ Klopp said.

‘It’s really hard, I can imagine, and obviously Ralf Rangnick, and I know how it sounds when the manager of Liverpool says I feel a little bit for him, but it’s like that. I can understand it’s really difficult.

‘You go to Liverpool, they are really good, and you go ‘we have no defensive midfielder’, that’s not good news. It’s just not cool, and that’s the situation they’re in.

‘I’m not interested in gulfs or distances between us and them. I know we’ll go there next year and they’ll have the results from last year in mind, and it makes it even more difficult when we arrive there.

‘But for the moment, it is how it is, and we are happy with our situation, and they will sort their situation.’

United’s 3-1 loss to Arsenal on Saturday was a huge blow to their top four chances – with four matches left to play, they are now six points behind the Gunners who have a game in hand.