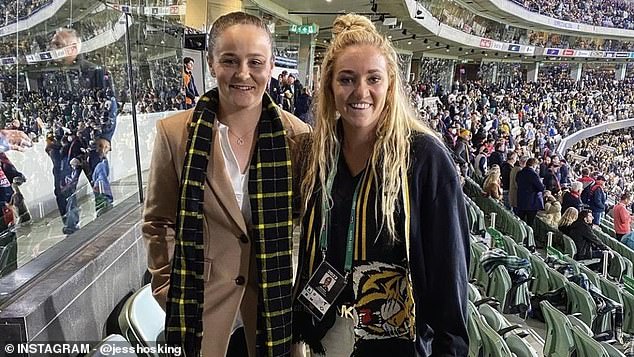 AFLW star Jess Hosking is still trying to convince Ashleigh Barty to take up football after retiring from tennis.

The three-time Grand Slam champion walked away from the sport for a second time in March to ‘chase other dreams’ less than two months after winning the Australian Open.

The reigning Wimbledon champion is a life-long Richmond fan and presented the Tigers with the premiership cup when they clinched a third flag in four years in 2020.

Jess Hosking (right) captioned this picture of her and Ashleigh Barty at the MCG on Sunday as ‘putting pen to paper’, joking she was trying to convince Barty to switch to footy

Barty was in the stands on Sunday to cheer Richmond on in their game against Melbourne and Hosking joked she tried to convince the 26-year-old to switch to footy.

‘Putting pen to paper,’ the Tigers star wrote on Instagram as caption of a picture of her alongside Barty.

Unfortunately for Hosking, her dream to see the reigning Australian Open champion lace her boots may have to wait as she appears more inclined to commit to golf.

A scratch golfer, earlier this month Barty confirmed she will take part in in the new Icons Series – a nine-hole team match-play tournament at the prestigious Liberty National Golf Club in New Jersey from June 30-July 1.

Barty, who has held the status of World No 1 since June 24, 2019, first took an indefinite break from tennis eight years ago, swapping her racket for a cricket bat as she signed up to play for Brisbane Heat in the inaugural Women’s Big Bash League.

She eventually returned to the court, but made clear last month there would be no coming back this time.

‘I know I’ve done this before but in a very different feeling and I’m so grateful of what tennis has given me, all of my dreams plus more but I know the time is right now for me to step away and to put the rackets down,’ she said in an emotional interview with former doubles partner and good friend Casey Dellacqua.