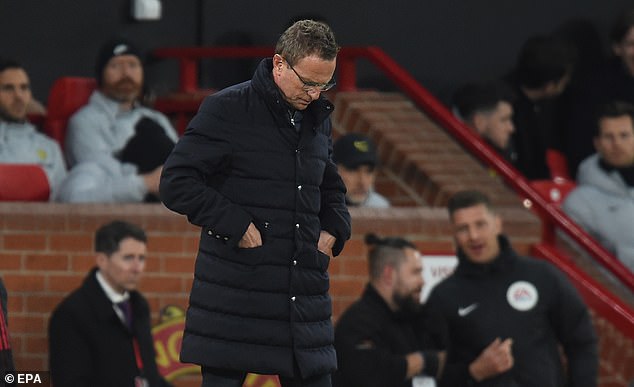 CHRIS WHEELER: Ralf Rangnick combining jobs as Manchester United consultant with Austria boss is a cack-handed plan but it’s not a mess of his making – you couldn’t blame him for getting a one-way ticket to Vienna

When Chelsea appointed Thomas Tuchel last year, he had been out of work for just a month following his sacking at Paris Saint-Germain.

The German coach lifted the Champions League only four months later in what was one of his six finals in little over a year at Chelsea. Compare their strategy to that of Manchester United.

Appointing Ralf Rangnick (pictured) as interim manager was meant to buy Manchester United time but instead, the season has been consigned to the dustbin and they have gone backwards

Having decided to sack Ole Gunnar Solskjaer in November, United actively sought to install a caretaker manager in Michael Carrick and then an interim in Ralf Rangnick before deciding to bring in Erik ten Hag at the end of the season.

The plan was meant to buy United time but all it has done is to consign the remainder of the season to the rubbish bin. Instead of moving forwards, they have gone backwards.

He has not worked out as an interim manager and that curious, vague consultancy role that is due to follow for the next two years now looks equally shaky.

Rangnick is set to be announced as Austria boss and will reportedly combine the role with his position as consultant at Old Trafford – how can he influence United in those circumstances?

Rangnick is so focussed on that crucial, six-days-a-month job that he has decided to become manager of Austria in his spare time.

Assuming he tries to combine both roles, it’s a plan as cack-handed as the decision to appoint him in the first place. How is he meant to influence a club of United’s stature in those circumstances?

Former United captain Roy Keane isn’t the only one who must be thinking that a clean break would be better for both parties. ‘It’s been a difficult few months for him so I think a clean break might not be a bad thing,’ Keane told Sky Sports.

Rangnick came in as a potential kingmaker; someone who could have a major say in identifying his successor and maybe even land the full-time job himself.

After seeing United largely dominated in a 1-1 draw against Chelsea on Thursday evening, you could not blame the German for getting a one-way ticket to Vienna and never coming back

Six months later, he will step upstairs as a lame duck manager who was so irrelevant to the process of ten Hag’s appointment that he hasn’t even spoken to the Dutchman.

This mess isn’t of Rangnick’s making, though. He is the victim of a flawed plan and a club creaking under the weight of years of mismanagement.

He isn’t the first coach to try to get a tune out of this under-achieving, dysfunctional United squad and fail. At least we got to appreciate his honesty and candour.

But you couldn’t blame him for getting a one-way ticket to Vienna and never coming back.