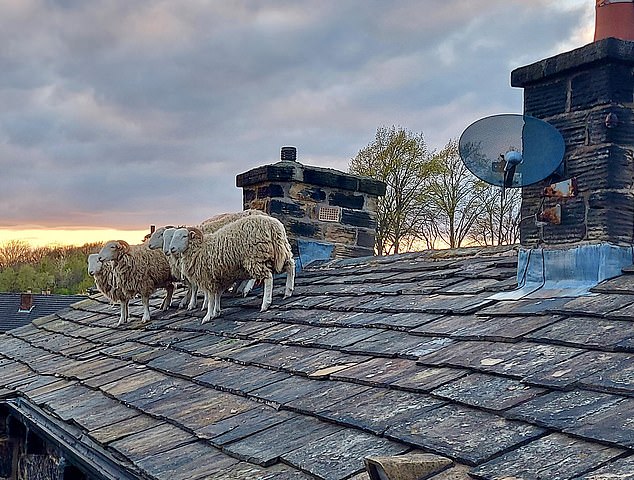 That’s a shear drop! Sheep are saved by plucky firefighter after clambering onto ROOF of terraced house

By Chris Brooke for Daily Mail

Firefighters might be dab hands at rescuing cats stuck in trees – but five sheep on a roof requires a little more creativity.

One fire station received a rather unusual call-out on Tuesday evening, after sheep grazing in a field behind a row of terraced cottages leapt over a 5ft gap and on to the tiled roof.

Arriving in Newmillerdam, near Wakefield, West Yorkshire – where the sheep had been stuck for several hours before the fire service was alerted – station commander Damian Cameron found one of the animals precariously close to a 25ft drop to the ground.

Five sheep became stranded on top of cottages in Newmillerdam, near Wakefield, West Yorkshire, and had to be rescued by firefighters

The sheep cleared a gap of five feet to get onto the roofs, but on the other side there was a near 25ft drop

Without his crew and fully equipped fire engine, Mr Cameron – with the help of a local landowner – got to work building a makeshift bridge out of timber for the sheep to cross back into the field.

He said: ‘The idea was to entice the sheep across. We had to use a bit of animal husbandry to get the sheep to go back across our bridge. Eventually one went over and the other four followed.’

A temporary fence has now been erected to stop a repeat of the drama.

Mr Cameron Tweeted photos of the stranded sheep, telling his followers: ‘Some calls are stranger than others! All now safe on terra firma.’

He said yesterday: ‘It was a very unusual job. I have had some strange ones involving animals before, including a cow on a balcony, but I have never had sheep on a roof before.’