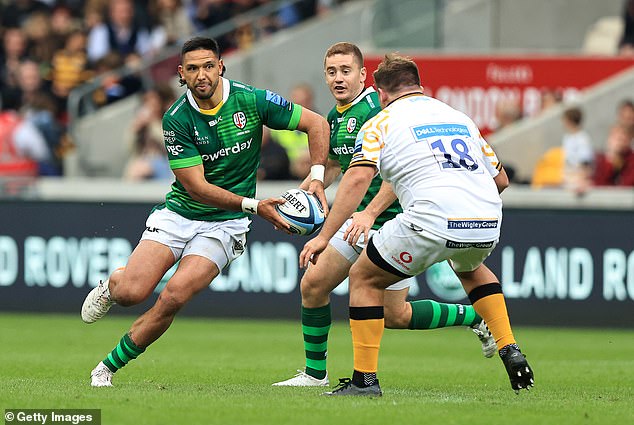 CHRIS FOY: The scrap to secure the last play-off place in the Gallagher Premiership will go down to the wire… with Saracens set to play a major role in deciding who will make the cut

There was high drama in Brentford on Sunday but the upshot of London Irish’s stunning fightback for a 42-42 draw with Wasps was that the visitors are out of the battle for fourth place.

Really, that’s the only meaningful prize to play for in the Premiership now. Leicester will finish top, Saracens second, Harlequins third — and there’s no relegation to create tension at the foot of the table. So the last play-off place is the focus.

Exeter and Sale retain faint hope, but in truth it’s between Northampton and Gloucester. The Saints are in the box-seat, but it may not stay that way.

Don’t rule out another twist. James Grayson’s late penalty last Friday night earned the East Midlands club a one-point winning margin over Harlequins, which just summed up how fine the margins are at this stage.

Prepare for this to go to the wire — and for Saracens to have a major role in deciding who will make the cut. Northampton’s next league fixture is against them in north London on May 21.

In order to guarantee a home semi-final, Saracens are bound to throw the proverbial kitchen sink at that game, even if they have a European Challenge Cup final six days later. Very few teams take anything away from Barnet — even a losing bonus — if Saracens are at full strength.

So Gloucester will sense the chance to edge into fourth, but to do so they will need to take at least two points from their trip to Harlequins. If they can’t win, George Skivington’s side must secure a draw or maximum bonus points, because Saints have one more win than them — and the final weekend fixture list falls in their favour.

With so much to play for, against opponents lacking any real motivation, Northampton are sure to thrash Newcastle at Franklin’s Gardens on June 4. Gloucester have to assume Saints will claim five points that day, which means they might have to do the same against Saracens.

So it could all come down to what sort of side Mark McCall sends out for that game. If Saracens are at full strength, Gloucester will be hard-pressed to demolish them, but if they are in rotation mode, that is a possibility. There is a chance the outcome of this close contest may be settled on June 3, when McCall names his line-up for the Kingsholm match.

The logical prediction is that Saints can claim fourth place, to create two derby semi-finals: Leicester v Northampton and Saracens v Harlequins. But when has logic ever come into it?

Spain’s removal from next year’s World Cup for fielding an ineligible player was an embarrassing episode which highlighted the need for a broader playing base.

Gavin van den Berg’s selection for two appearances against Holland should not have been authorised, despite being checked — a fact which only came to light when Romania made an official complaint.

That only happened because the South African’s social media posts revealed he had not spent the requisite time (at least 10 months per year for three consecutive years) in Spain. It is cringingly amateurish, and another sign that nations outside the established elite have to rely too much on imported talent.

Exeter and Sale retain faint hope, but in truth it’s between Northampton and Gloucester

Georgia are a notable exception among the European second tier, but Spain and others tend to recruit Pacific islanders and South Africans. More must be done to help these countries develop native talent.

There were heartening scenes in Swansea on Saturday as Wales and Lions wing George North made his return after a year out with a knee injury.

The Ospreys scored eight tries and swept aside Scarlets 54-36 in a thrilling URC contest, in front of more than 10,000 noisy fans.

It was a rare glimpse of lost vibrancy in the Welsh domestic game. North, 30, is just the sort of box-office figure who can generate interest.

He was in vintage form before his absence and how Wales could do with him at his imposing best when they head to South Africa for a daunting Test series against the Springboks this summer.

Chris Ashton’s career revival reached new heights on Saturday, when his hat-trick against Bristol at Welford Road propelled him past Tom Varndell to become the Premiership’s all-time leading try-scorer on 95.

With two more regular-season games and the play-offs after that, he could reach a century by the end of this campaign.

It is surreal to think back to the end of last year when Ashton had been released by Worcester, after ill-fated spells with the Warriors, Harlequins and Sale.

The former England wing appeared to be finished, but now he is flying again — which is a tribute to the competitive streak of an engaging character who will go down as one of the most predatory finishers the game has seen.

The 35-year-old holds the Premiership, European Cup and single-season Top 14 try-scoring records. Some of his tallies may never be eclipsed. Bravo.