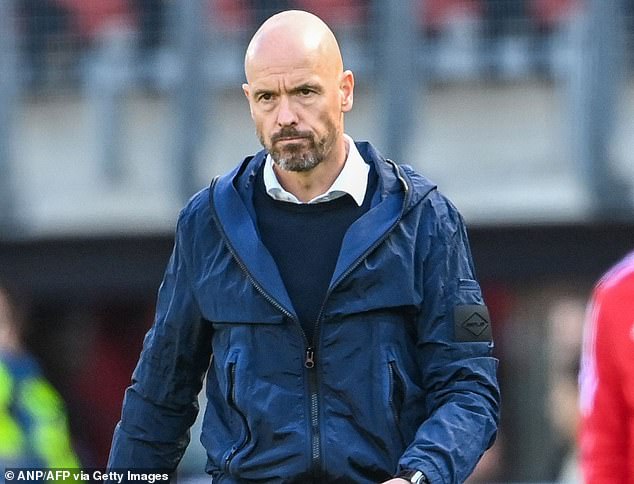 United sparked outrage online with an update on Ajax’s bid to become Eredivisie champions, sharing news of their dramatic 2-2 draw away at AZ Alkmaar over the weekend.

Linking to a story on their official website, the post on Twitter, which has since been taken down due to the backlash it received, read: ‘Erik ten Hag’s side maintained their advantage in a dramatic afternoon in the race for the Eredivisie title’.

The controversial tweet came just hours after reports emerged of United CEO Richard Arnold’s unhappiness with their widely-derided social-media strategy, and two days on from their 4-0 drubbing away at Brighton.

Supporters quickly expressed their dismay at the post, with one writing: ‘Less than a couple of hours after reports that Richard Arnold is (rightly) unhappy with United’s social media strategy, this tweet was sent out by the official @ManUtd account and then promptly deleted following a huge response from angry United fans. They cannot read the room.’

Another fan said: ‘@ManUtd Admin you are a disgrace … sack the admin mfs’.

A third put: ‘Imagine posting this on the clubs official twitter. No wonder they deleted it. Absolute f*****g embarrassment we are!’

After fierce criticism from supporters, United were forced to remove the controversial tweet

Another came to this damning conclusion: ‘Do you know what @ManUtd social media team are just as bad as the actual football team’.

He could well be stewarding the club in the Europa Conference League next season, as Saturday’s hammering at Brighton has dented their chances of qualifying for the Europa League.

United legend Gary Neville says Ten Hag has a ‘massive job on his hands’ at Old Trafford, admitting his old club are at their lowest point for years.

‘It’s been a shocking few months. I can’t wait for the season to end and to stop talking about them,’ he said on The Gary Neville podcast.

‘I was delighted not to be on the Brighton game before it, during it and after it. I can’t watch them because it doesn’t represent anything that a football club should be, let alone Manchester United.

‘The players are only damaging themselves to a point where the fans won’t forget. They were singing “you’re not fit to wear the shirt” – I have never, ever, heard United fans resort to that chant. That’s a chant you would hear at QPR a few years ago or Sunderland when the fans were walking out.

‘I have never known a United fanbase turn on a team like this one. It’s now really clear the players have thrown the towel in. They really have. It’s been a disgrace for a couple of months. It’s embarrassing.

‘Ten Hag has got a massive job to do.’