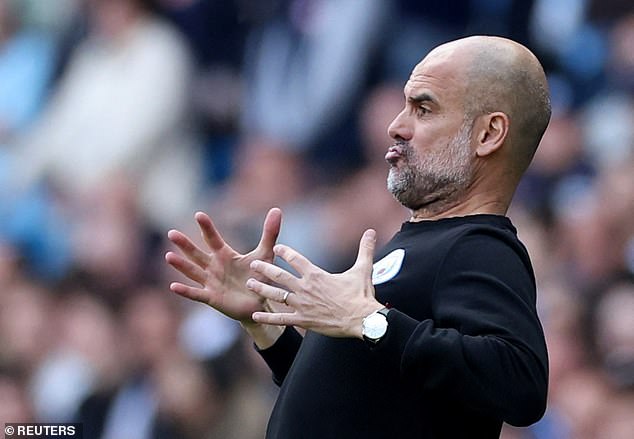 ‘It doesn’t guarantee they’ll win everything’: Jamie Carragher claims signing Erling Haaland will ask lots of tactical questions of Pep Guardiola – but admits the superstar striker is a ‘brilliant signing’ for Man City

Erling Haaland could upset the balance of Manchester City’s team, according to Liverpool legend Jamie Carragher.

City confirmed the signing of the superstar Norwegian striker, 21, from Borussia Dortmund for £51million on a five-year contract worth £385,000-a-week on Monday.

And Reds icon Carragher, speaking on Sky Sports before Jurgen Klopp’s side faced Aston Villa on Tuesday night, called it a ‘brilliant signing’ but said it would ask lots of tactical questions of Pep Guardiola.

Erling Haaland will ask ‘lots of questions’ of Pep Guardiola, according to Jamie Carragher

🗣 “It doesn’t guarantee that City will win everything.”@Carra23 on how much better Erling Haaland can make Manchester City in the Premier League and Champions League pic.twitter.com/JLsOWYCj5p

He said: ‘Brilliant signing, it really is. Not just for Man City, but for the Premier League. I think we’re all intrigued to see how he’ll do. Him and (PSG’s Kylian) Mbappe feel like the next two superstars who are going to eclipse Messi and Ronaldo and you’re just delighted that he’s at the Premier League.

‘More often than not, those type of players have gone to maybe a Barcelona or a Real Madrid, but I feel like now that the Premier League is the strongest league. You’ve seen how well we’ll done in the Champions League.

‘He’ll score goals, that’s what he’s been bought to do, but it doesn’t guarantee that City will win everything. You still have to integrate him into the team. That means City will lose another creative player that helps them keep the ball more or have more control in games.

However, Liverpool icon Carragher hailed the move as a ‘brilliant signing’ for the Citizens

‘There’s lots of questions that I’m already thinking of myself. We’ll be analysing his performances and how he fits it, but they had a world class striker in Sergio Aguero and they’ve got another one now.’

Carragher also claimed after Liverpool’s 2-1 win over Aston Villa that Haaland would not win them any more points in the Premier League than what they do already, but he could be the key to stop them from suffering a horrendous collapse in the Champions League semi-final against Real Madrid.

Carragher added: ‘He’s a player we’ve always looked at from afar. He’s like a battering ram at times.

‘I don’t think City can get any more points in the Premier League (with Haaland), but he can stop them going out of the Champions League against Madrid, for example.

‘He can’t make them better because they’re already at the top.’

Haaland was one of the most coveted players in world football after an astonishing record of 85 goals in 88 games in all competitions for the Bundesliga side.

He is the first genuine central striker, or ‘No 9’, since City legend Sergio Aguero left for Barcelona on a free since May 2021.