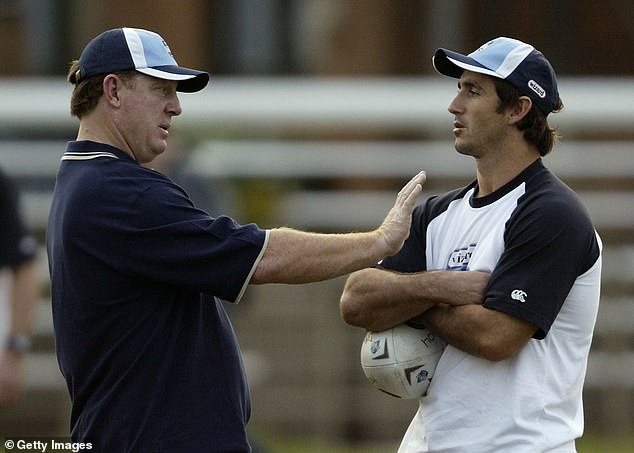 Andrew Johns has revealed the reasons behind the famous dressing down he received by Phil Gould during the 2003 State of Origin camp, and admitted it was entirely deserved.

A picture of the two in discussion during a training session at Coogee Oval shows Gould extending his arm towards Johns, who has his arms crossed and looks distinctly unimpressed.

The picture made the front and back pages of most Australian newspapers, amid rumours the New South Wales coach was unhappy with his champion halfback.

Coming after Gould had criticised Johns in his Sun-Herald column for ‘losing confidence’, the snap fuelled speculations of a growing rift between the two.

Johns, however, admitted the criticism was fully deserved and helped him regain focus.

‘At the time I wasn’t playing that well. I had a lot of discussions away from footy, probably footy wasn’t my number one focus […] other things were getting in the way,’ he said on Wide World of Sports’ Stories of Origin podcast.

‘He put me on show, and I didn’t take it too well. It blew up – there’s photos everywhere. It was all paper talk, I was never not going to play.

Gould has maintained the picture was taken out of context, but Johns revealed the NSW coach’s scathing assessment of his performances helped him focus again on footy

‘I went home and I did that much extra training, got myself rock hard fit, and then we got into Origin and I was ready to go.’

At the time the former Newcastle Knights star was livid with Gould, but he has since acknowledged the Blues great did exactly what was needed to keep his ego in check.

Gould was prepared to go where others wouldn’t and delivered some harsh truths to the star five-eight.

‘At the time I needed my wings clipped, I needed a kick in the backside and I wouldn’t get it anywhere else,’ Johns continued.

‘You get to a certain level, people don’t tell you the truth. They bulls**t to you. He didn’t bulls**t me, he hit me straight between the eyes.

‘At the time I didn’t like it, but I look back now and realise it’s what needed to be done. There’s only a couple of people who would do that, and Gus was one of them.’

Whatever Gould told Johns, his words had the desired effect as the Knights legend delivered arguably his best performance in an Origin series.

Johns scored almost half of the Blues’ points as they claimed Game I 26-12 in Brisbane and was voted man of the match in Game II as the Blues clinched the series with a 27-4 win.

For his part, Gould maintains the picture was taken out of context and that he wasn’t criticising Johns when the photo was taken.

‘The reporting of that incident was disgraceful back in the day, and was pointed at me more than anything, and made it very difficult for him, he said on his Six Tackles with Gus podcast.

‘I remember the actual photo – in that photo I was actually explaining to him how I wanted him to defend. […] I was actually standing there talking to him [saying]: “You will stand behind the line”, and that’s the photo where I’m going like that [holding my hand up].

‘[The media] dressed it up into something it wasn’t.’