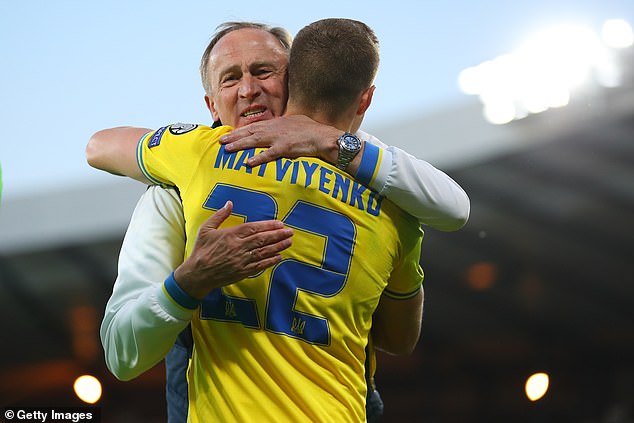 ‘We played for those who give their last drop of blood and suffer every day’: Ukraine boss Oleksandr Petrakov proud of his players after victory over Scotland takes them a step towards ‘great aim’ of qualifying for World Cup

Ukraine boss Oleksandr Petrakov hailed his side’s 3-1 win over Scotland as a victory for their entire war-torn country.

In their first competitive fixture since the Russian invasion began in February, Ukraine moved to within one match of November’s World Cup in Qatar. They now face Wales in Cardiff on Sunday.

Petrakov said: ‘This victory was not for me or the team, it was for our country. This is a huge win for Ukraine.

‘It was a team effort. They did everything for the people they play for – the people watching at home, the people in the armed forces, in trenches, in hospitals. We played for those who give their last drop of blood and those who suffer at home in Ukraine every day.

‘This is one step towards our great aim. We will do everything in Wales that people expect of us. We will make Ukrainian people proud, because we are extremely proud Ukrainians.’

Petrakov also thanked the support of their Scottish hosts.

‘I was walking in Glasgow yesterday morning and some Scottish people approached me and wished me all the best of luck,’ he said.

‘I want to say thank you, Scotland. I will never forget that.’

Scotland boss Steve Clarke said: ‘Ukraine deserved to win, they were the better team on the night.’