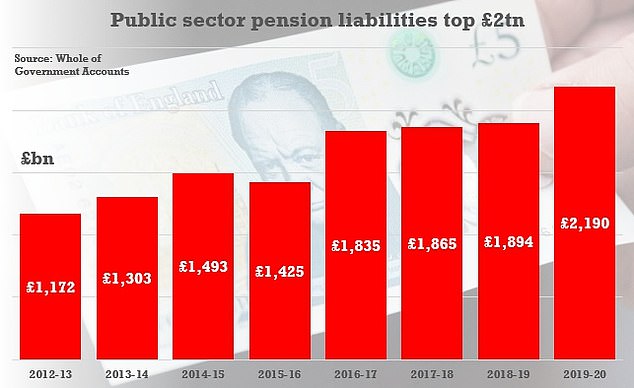 The public sector pensions liability has soared above £2trillion for the first time and is bigger than the national debt, it has been revealed.

Government accounts show that the liabilities for retirement payouts – not including the state pension – went up 16 per cent year-on-year.

The figure reached £2.2trillion by the end of 2019-20, the most recent financial year for the Whole of Government Accounts released this week.

That was significantly higher than the £1.8billion level of the debt mountain at the same time.

Campaigners warned that the scale of the numbers should be a ‘wake up call’ about huge costs coming down the track.

They will have to be met by future taxpayers in to honour the substantial pension deals still on offer to public sector workers, such as MPs, judges, civil servants and NHS doctors.

The bulk of the liabilities come from the pension schemes for the NHS, teachers, civil service and the Armed Forces

State employees still have access to pension schemes with payouts linked to their salaries and indexed to inflation, despite nearly all private sector companies abandoning the deals when they became too expensive.

The £2.2trillion public sector pension liability amount to around 44 per cent of the government’s total liabilities in 2019-20.  It was up from £1.89trillion the previous year.

The accounts pointed to change in the assumptions used to calculate the value of public sector pensions, such as life expectancy and the difference between investment yields and inflation.

The bulk of the liabilities come from the pension schemes for the NHS, teachers, civil service and the Armed Forces – which have millions of members.

All four are unfunded – meaning that, rather than going towards their own pensions,  contributions by current workers are used to help the taxpayer shell out for those who have already retired.

The NHS scheme saw its liabilities increase by £140billion to £760billion.

The Teachers’ Pension Scheme recorded a £79.4billion rise to £490billion. The Cabinet Office scheme accounts for £308.6billion of the total and the Armed Forces £233billion.

The Local Government Pension Scheme has a £105.7bn liability.

Danielle Boxall, media campaign manager at the TaxPayers’ Alliance, pointed out that the pension liabilities have more than doubled since the Tories came to power in 2010.

‘Those in the public sector have pensions which private sector workers could only dream of,’ she said.

‘These numbers are a wake up call for the scale of the financial challenge facing us, not just today but for years into the future.

‘The government should stop kicking the can down the road and ensure that new public sector pensions are properly funded to protect future generations from footing the bill.’