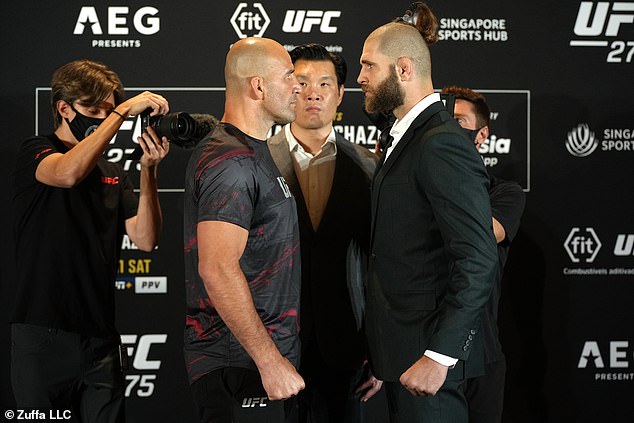 Daniel Cormier has warned Jiri Prochazka that impatience against Glover Teixeira could prove fatal to his title hopes.

Teixeira is vastly experienced and the 42-year-old light-heavyweight champion is likely to attempt to take the challenger down, avoiding his dangerous striking.

DC believes there’s a chance Prochazka becomes too exuberant and could lose his sense of range.

He told MMA Fighting: ‘Jiri went to Arizona to work with Henry Cejudo a bit, he’s doing the things necessary to give himself a chance against Glover Teixeira but I believe everybody did. Glover is heavy on top man.

‘His top pressure is so good and he’s great at wearing these guys down. I think we’ll see Prochazka a little bit more patient.

‘Reyes and Oezdemir only had success when he was over extending himself, a bit too frantic and rushing.

‘He understands that if he does touch Glover he does have the opportunity to put him out but if he gets excited and taken down, he may not make it back up to his feet.’

Prochazka’s two UFC victories have come by knockout and he is among the more creative, explosive strikers in the game.

But he remains a relatively unknown quantity at the top level. Georges St-Pierre has tipped him as a future champion and the bookmakers favour him this Saturday.

Perhaps Teixeira’s age is being counted against him despite the remarkable Indian summer to his career.

The veteran still possesses a huge threat and as Cormier noted, should certainly not be written off.