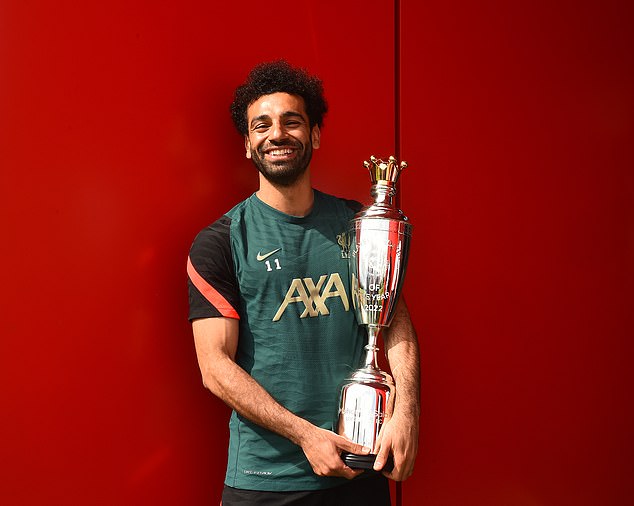 Liverpool forward Mohamed Salah has been named the PFA Player of the Year to end Manchester City midfielder Kevin De Bruyne’s run after winning it the last two years.

Salah, the joint-top goalscorer in the Premier League last term with 23 goals, was also chosen ahead of Liverpool team-mates Sadio Mane and Virgil van Dijk.

Manchester United’s Cristiano Ronaldo and Tottenham’s Harry Kane were the others nominated for the prestigious annual award, which is voted for by the players.

Salah enjoyed another superb season as he scored 23 goals in the Premier League and also helped Egypt to the Africa Cup of Nations crown in February, but could not guide Liverpool to the title as they were runners-up to City.

The 29-year-old also finished the season with the most assists, recording 13 to claim the Premier League’s playmaker award.

It is the first time since 2018 that Salah, who has committed to Liverpool for the next season but whose future at Anfield remains uncertain beyond that date, has won the PFA Player of the Year prize.

‘It’s a great honour to win a trophy, individual or collective and this one is big so, very happy and very proud of that,’ Salah, who won the League Cup and FA Cup with Liverpool last term, said.

‘This one is a really good one to win, especially because it’s voted by players. It shows you that you’ve worked really hard and you get what you worked for.

‘I have my room with trophies in a cabinet and I made sure that I had another space for one more. I always keep space and just try to imagine that the trophies are going to come.

‘When you get older, you feel like you’re more stable and you know exactly what you want from football so I’m just trying to really chill and help the team.

‘That’s why I think I also won the playmaker because it’s like you’re more aware of the game, so you just try to make the people next to you better and try to make yourself better as well.’

De Bruyne, who won the award in 2020 and 2021, had been the favourite to retain the prize after another stellar campaign from the 30-year-old midfielder but was unable to secure a hat-trick.

With 15 goals and eight assists, De Bruyne was once again central to the success of Pep Guardiola’s side en route to the domestic title.

Mane, who is set to leave Liverpool for Bayern Munich this summer, has never won the award.

The Senegalese finished the season with 16 league goals and four assists, coming up big in huge moments, including netting the winner in a crucial trip to Aston Villa in the run-in. Such was his impact last term that he is in serious Ballon d’Or contention.

Ronaldo was perhaps a surprise inclusion on the list of nominees after United endured a dismal campaign, failing to qualify for the Champions League and ending with their lowest Premier League points tally.

Kane was aiming to become the first Spurs player to win the award since Gareth Bale in 2013.

The 28-year-old had a slow and sluggish start to the season, pinned on his failure to secure a move away.

But he was energised and refreshed under Antonio Conte and he helped play a key role in securing a return of Champions League football with a top-four finish.

Son Heung-min, who was joint-top scorer with Salah, Bernardo Silva and Rodri were among the high-profile names to miss out on being nominated.