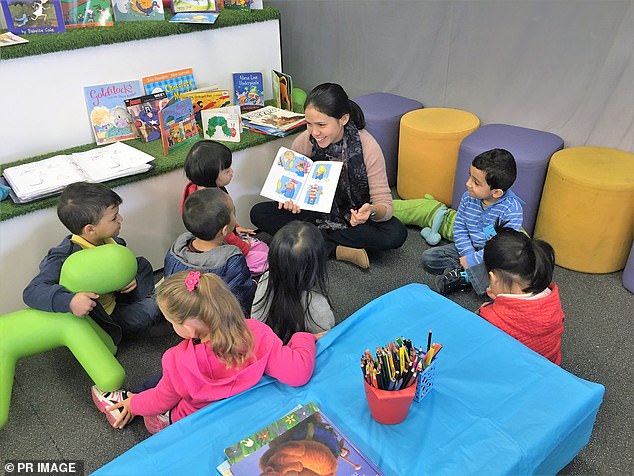 Massive change to early childcare will see children do an extra year at school from the age of FOUR for free – as two states introduce historic $15billion policy: Here’s what you need to know

Millions of children across NSW and Victoria will receive an additional year of education in a major overhaul that will see free ‘pre-Kindergarten’ introduced – with parents to save thousands.

The policy will be brought in to improve education standards across both states and see students score higher paying jobs after leaving school.

The extra year of classes will see children aged four attend school five days a week for free which will cost the NSW state government an estimated $5.8billion over the next decade, and Victoria $9billion.

In Victoria three and four-year-olds will also be given 15 hours of free sessional kinder a week from 2023, with parents saving $2,500 per child a year.

From 2025 the extra year of pre-prep classes for four-year-olds will start in Victoria. In NSW this will begin in 2030.

Up to 50 childcare government-run centres will also be set up in areas in Victoria where there aren’t enough services from 2025, offering lower fees to families than private centres.

Millions of children across NSW and Victoria will receive an additional year of preschool education in a major overhaul to early childcare (pictured, preschool students in Sydney)

NSW will spend an estimated $5.8billion over the next decade in new policies for early childhood education. Victoria will spend $9billion

In Victoria three and four-year-olds will also be given 15 hours of free sessional kinder a week from 2023, with parents saving $2,500 per child a year

Up to 50 childcare government-run centres will also be set up in areas in Victoria where there aren’t enough services from 2025, offering lower fees to families than private centres

The new policy will take pressure off families paying for childcare in the year before school by increasing free preschool from 15 to 30 hours per week.

Up to 130,000 children are expected to enrol in the the NSW pre-Kindergarten classes by 2030, which are not compulsory.

‘This is an incredible reform that will change lives and deliver enormous educational benefits for children across the state, securing a brighter future for NSW families,’ the premier said.

‘We’re ensuring our youngest learners thrive by introducing a full year of preschool education before Kindergarten.’

The state government will spend $54million designing a model for how the week’s worth of classes will be taught to pre-Kindergarten students.

In Victoria it’s expected up to 90 per cent of families will take up the offer for their kids to go into pre-prep classes, which are optional.

Premier Dan Andrews said: ‘These massive reforms are about setting our kids up for the future and investing in women – who for far too long have had to do far too much.’

‘These are big changes, but they just make sense.’

NSW Treasurer Matt Kean said parents across the state could expect ‘intergenerational results for our kids and the economy’.

The policy will also provide five days of free childcare, an additional two to the three currently enjoyed by households in NSW (pictured, children at a early learning centre in Sydney)

The policy is expected to be the most efficient way of boosting declining education standards with a similar model experiencing great success in Canada.

Mr Kean described the extra year of education as the closest thing to a ‘silver bullet’ when it came to improving NSW education.

The new policy is expected to be at the centre of next week’s state budget, which the treasurer said was focused on ‘investing in a better future’.

Education Minister Sarah Mitchell hinted the classes would be ‘play-based learning’ and said she had been pushing for the extra year of education since seeing its success in Canada, where 90 per cent of families enrolled.

In a joint statement, the premiers said the new policy was ‘the greatest transformation of early education in a generation’.

Victorian Minister for Early Childhood Ingrid Stitt said the policy would give kids the best start to life, with 90 per cent of brain development occurring in the first five years.

‘We know families are struggling with the cost of living and free kinder will help make sure no child misses out on those vital early years,’ she said.