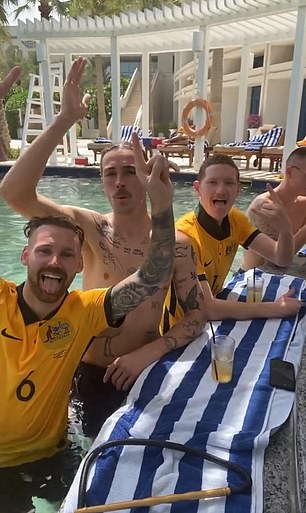 No time to get changed, fellas? Socceroos heroes toast their World Cup success in the pool while STILL wearing their jerseys from the night before as Aussies bask in their dramatic win over Peru

Australia are enjoying the fruits of their labour after securing their place in this year’s World Cup, with a handful of stars seen enjoying a few drinks in the pool – while wearing their kits from the night before.

Substitute goalkeeper Andrew Redmayne was the hero for Graham Arnold’s side on Tuesday morning after saving Peru star Alex Valera’s spot kick to send the Socceroos to their fifth-successive World Cup.

Australia’s chances of getting a result against the South Americans were widely overlooked but an inspiration team talk from boxing hero Jeff Fenech helped motivate them to victory.

And Socceroos gun Trent Sainsbury has lifted the lid on Australia’s wild celebrations following their victory in Doha, filming himself at a swim-up bar alongside teammates Martin Boyle, Jackson Irvine and Kye Rowles.

It is fair to say the trio were looking a little worse for wear with drink and a sheesha pipe in hand, while Boyle and Rowles seemingly forgot to take their match-worn jerseys off before going for a dip.

The squad has every right to bask in their success in Qatar, having come through a gruelling qualification campaign to earn their place in Group D – where they will take on France, Denmark and Tunisia.

Despite his individual heroics, Redmayne refused to take credit for his side’s achievement on Tuesday morning.

Trent Sainsbury, Martin Boyle, Jackson Irvine and Kye Rowles were seen in their kit in the pool

‘I’m not going to take credit for this,’ Redmayne said.

‘The boys ran out there for 120 minutes. It’s a team effort. I’m not a hero. I just played my role like everyone else did tonight.

‘This idea was floated pre-selection that this (shootout) might eventuate in these kinds of circumstances.

‘At the end of the day, it’s the flip of a coin. Either right or left.’

‘I am just so proud of the players,’ Socceroos boss Arnold added.

‘Really no one knows what these boys have been through to get here, it was so hard, the whole campaign. The way they stuck at it, the way they committed themselves, brilliant.’