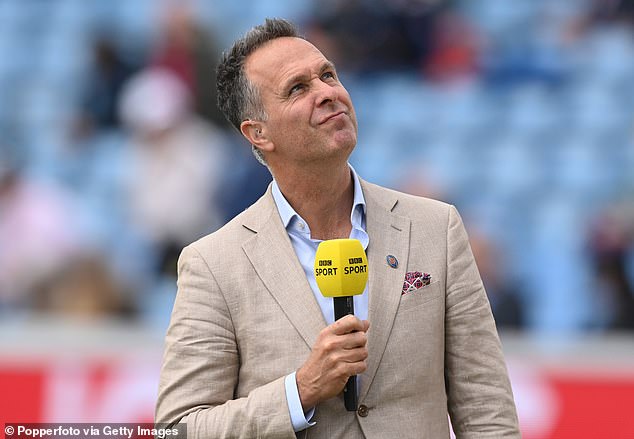 EXCLUSIVE: Former England captain Michael Vaughan was driven out of the BBC’s commentary team by a group of disgruntled staff who don’t work with him or on Test Match Special, and who have not sought a meeting with him

By Matt Hughes For Mailonline

Michael Vaughan was driven out of the BBC’s commentary team by a handful of disgruntled staff who do not work with him or on Test Match Special, Sportsmail has learned.

The former England captain announced he was ‘stepping back’ from his commentary duties on TMS on Tuesday evening after all BBC employees received an extraordinary email from two of the corporation’s diversity groups the previous morning, which described Vaughan’s continued employment as ‘totally inexcusable’ and ’embarrassing’ after he was charged by the ECB with the alleged use of racist language to Azeem Rafiq.

The strongly-worded email, which was revealed and published in full by MailOnline shortly after it was sent on Monday morning, came from an anonymous account claiming to represent BBC Sport’s BAME Group and the Radio 5 Live Diversity group.

Sportsmail has subsequently discovered that many staff at BBC Sport, including those from ethnic minority backgrounds, were unaware of the existence of either group or those involved, who have not identified themselves even internally.

The email which caused Vaughan to stand down is understood to have been the work of six people who do not work in cricket, with the majority of them involved in the BBC’s football and digital offerings, and who have not sought a meeting with Vaughan to address their concerns.

One of the group made themselves known internally at the BBC by sending a follow-up email offering to talk to anyone upset by the Vaughan situation, a gesture which was well received by many of his colleagues. Sportsmail has spoken to several of the group and are aware of all their identities, but has chosen not to name them.

As well as criticising BBC executives for standing by Vaughan the anonymous email also claimed that his continued work for Test Match Special was causing considerable distress to others.

‘Colleagues from all backgrounds from across the BBC have been in touch to share their disbelief and dismay, with some moved to tears because of the lack of empathy over this,’ the email read. ‘What support is in place for colleagues deeply affected by this, but still having to work with Michael Vaughan? This is a shocking miscalculation.’

The BBC declined to answer Sportsmail‘s questions about their staff organisations on the grounds of confidentiality, although conceded that they were informal groups with a fluid membership. ‘This was an open letter from a group of staff and your assertion is factually incorrect,’ a spokesperson added.

The charges against Vaughan date back to 2009, when it is alleged he told Rafiq and three other Muslim players ‘there are too many of you lot,’ before a Yorkshire match.

Rafiq’s allegations have been supported by England spinner Adil Rashid and former Pakistan fast bowler Rana Naved-al-Husan, but former England fast bowler Azmal Shahzad has endorsed Vaughan’s version of events that he did not use any racist language.

Vaughan was initially suspended by the BBC after the allegations first emerged last November and was not part of Test Match Special’s Ashes coverage before returning to work in March.

The 47-year-old was one of seven former Yorkshire players charged by the ECB in relation to the Rafiq affair last month however, which triggered a backlash from some BBC staff and has led to him voluntarily standing down, although he remains under contract.