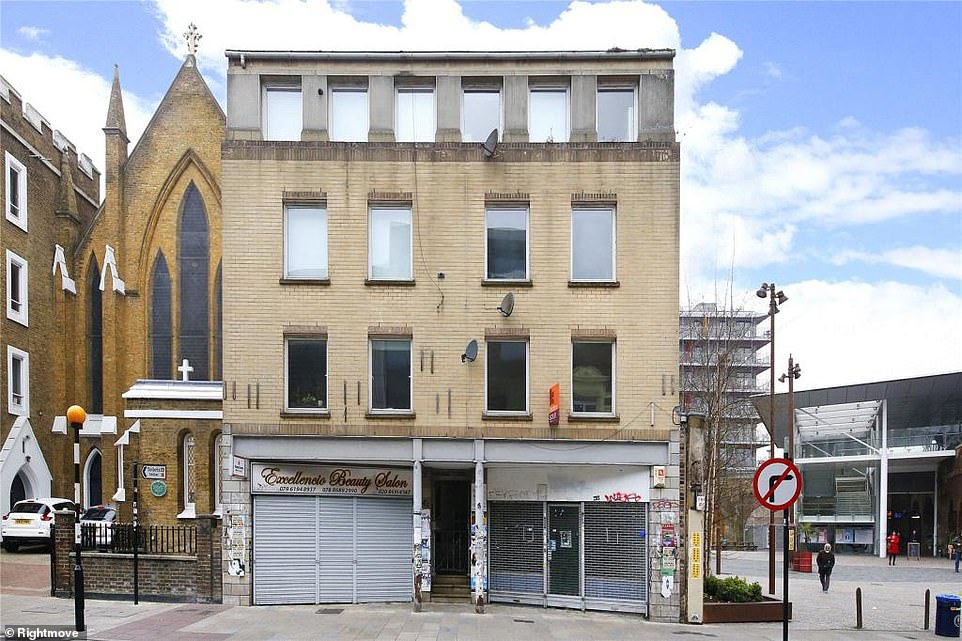 The average UK house price hit a new record high in June but there are ‘tentative signs of a slowdown’, according to an index.

Prices were up by 10.7 per cent in June, slowing from 11.2 per cent in May, Nationwide Building Society said.

LONDON: At £270,000, this one bedroom flat is on the cusp of Deptford Market Yard and Deptford Station. The property is situated on the first floor of a four-storey development with commercial premises below. The property consists of a open plan reception/kitchen, double bedroom and three-piece bathroom (see listing)

EAST ANGLIA: At £270,000, you can purchase this quaint end-of-terrace two-bedrom home in Haverhill, Suffolk’s fastest-growing town, with a spacious sitting room and dining room, kitchen and a generous back garden (see listing)

WALES: At £270,000, this three-bedroom detached property in Narbeth, Pembrokeshire, can be yours in one of the most beautiful parts of the country. The house has three bedrooms and two reception rooms this makes an ideal home for a family or a couple (see listing)

SOUTH WEST – At £270,000, you can buy this characterful two-bedroom semi-detached house in the sought-after village of Goodleigh near Barnstaple, Devon, commanding some stunning views across the surrounding countryside (see listing)

Robert Gardner, Nationwide’s chief economist, said: ‘The price of a typical UK home climbed to a new record high of £271,613, with average prices increasing by over £26,000 in the past year.

‘There are tentative signs of a slowdown, with the number of mortgages approved for house purchases falling back towards pre-pandemic levels in April and surveyors reporting some softening in new buyer inquiries.

‘Nevertheless, the housing market has retained a surprising amount of momentum given the mounting pressure on household budgets from high inflation, which has already driven consumer confidence to a record low.

How does your region fare when it comes to house prices?

Here are average house prices in the second quarter of 2022 followed by the annual increase in prices, according to Nationwide Building Society:

‘Part of the resilience is likely to reflect the current strength of the labour market, where the number of job vacancies has exceeded the number of unemployed people in recent months.’

Mr Gardner said that, at the same time, the stock of homes on the market has remained low, keeping an upward pressure on house prices.

‘The market is expected to slow further as pressure on household finances intensifies in the coming quarters, with inflation expected to reach double digits towards the end of the year.

‘Moreover, the Bank of England is widely expected to raise interest rates further, which will also exert a cooling impact on the market if this feeds through to mortgage rates.’

Looking across the UK, Mr Gardner said quarterly figures showed a softening of house price growth in many regions in the three months to June.

‘The South West (of England) overtook Wales as the strongest-performing region in quarter two, with house prices up 14.7 per cent year on year, a slight increase from the previous quarter.

‘This was closely followed by East Anglia, where annual price growth remained at 14.2 per cent.

‘Wales saw a slowing in annual price growth to 13.4 per cent, from 15.3 per cent in the first quarter.

‘Price growth in Northern Ireland was similar to last quarter at 11.0 per cent. Meanwhile, Scotland saw a 9.5 per cent year-on-year rise in house prices.

‘There was a slowing in annual house price growth in England to 10.7 per cent, from 11.6 per cent in the previous quarter.

‘Within northern England, the North West was the strongest-performing region, with price growth picking up to 13.3 per cent year on year, from 12.4 per cent in the first quarter.

SCOTLAND – At £270,000, this three-bedroom seafront cottage in Carnoustie, Angus, is wonderful getaway, with a charming garden and with epic views of the North Sea (see listing)

EAST MIDLANDS – At £270,000, this beautiful new build property built in 2020 is ideally located in the popular area Houghton on the Hill, just outside of Leicester city. Surrounded by stunning countryside, the local area has a perfect sense of village life (see listing)

HOME COUNTIES – At £270,000, you can comfortably purchase this two-bedroom apartment in the vibrant town of Hitchin, Hertfordshire, with excellent rail links to London and Cambridgeshire (see listing)

SOUTH EAST – At £270,000 this delightful three bedroom detached house is on the market in Dover, Kent, with plenty of character and living space over three floors. The home offers excellent flexibility with equal sized bedrooms (see listing)

NORTH EAST – At £270,000, this 300-year-old Grade II listed terraced house is on the market in Alnwick, Northumberland, within walking distance of local amenities and Alnwick Castle (see listing)

YORKSHIRE AND THE HUMBER – At £270,000, this four bedroom detached house in Huddersfield, est Yorkshire, is perfect for family living with private and enclosed gardens, just a short walk from the sought after Lindley village (see listing)

‘London remained the weakest-performing UK region, with annual price growth slowing to 6.0 per cent, from 7.4 per cent in the previous quarter.’

Myron Jobson, senior personal finance analyst, interactive investor, said: ‘Property prices have gone up faster than wages, creating an affordability squeeze, while mortgage rates have risen to levels we haven’t seen in a while.

‘These factors, as well as the prospect of higher interest rates to rein in runaway inflation, are likely to go some way towards taming frothy housing prices.’

Nicky Stevenson, managing director of agent group Fine & Country, said: ‘Increased borrowing costs have come at a time when disposable incomes are already shrinking and the UK is edging closer to recession.

How much does the average home cost in your area? Average house prices for the second quarter of 2022 show an annual increase of over 10 per cent across most regions, except in London and Scotland

Across the UK, the average house price in June this year was £271,613,representing a record high – although there are ‘tentative’ signs of a slowdown’ Nationwide Building Society said. (Pictured: Average UK house prices from 2005 to present)

‘These pressures are bound to stretch affordability in the months ahead with inflation still to peak and more aggressive monetary tightening now being signalled by the Bank of England.’

Sarah Coles, senior personal finance analyst, Hargreaves Lansdown, said: ‘The question is whether we will see prices slow to a crawl, stagnate, or start to drop if we see a recession.

‘An awful lot depends on things we don’t yet know – including how high interest rates will go, how deep any recession might be, the impact it could have on jobs, and whether this is serious enough to cause real damage to the property market.’

She added: ‘The desperate dash for property at a time of rocketing prices may be over.

‘Buyers have time to consider whether this is a move they can really afford, and whether they’ll still be happy they made it if prices pull back later in the year.’

Best mortgage rates and how to find them

Mortgage rates have risen substantially as the Bank of England’s base rate has climbed rapidly.

If you are looking to buy your first home, move or remortgage, it’s important to get good independent mortgage advice from a broker who can help you find the best deal.

To help our readers find the best mortgage, This is Money has partnered with independent fee-free broker L&C.

Our mortgage calculator powered by L&C can let you filter deals to see which ones suit your home’s value and level of deposit.

Use the tool at the link below to compare the best deals, factoring in both fees and rates. You can also start an application online in your own time and save it as you go along.