Prince Charles and the Duchess of Cornwall have been praised for their ‘gold standard’ work ethic after it was revealed they will carry out 51 engagements in nine days on their royal tour next month.

Prince Charles, 71, and Camilla, 72, will visit a combined three countries in little over a week – stopping off in Bosnia and Herzegovina, Cyprus and Jordan between March 17-25.

Broad details of the itinerary were revealed yesterday by Clarence House, but exact timings and engagements are being kept under wraps until nearer the time.

However MailOnline understands there will be a total of 51 outings over the course of the nine-day tour, or an average of more than five a day.

The pace being set by the couple at an age when many are considering retirement has been widely praised by royal supporters on Twitter, who said it was tiring just thinking about the extraordinary workload.

Prince Charles and the Duchess of Cornwall were hailed as the ‘gold standard’ of royals after it was revealed they will carry out 51 engagements in nine days on their royal tour next month. Pictured, a photograph yesterday in a Clarence House post announcing the royal tour

Daily Mail Royal Editor Rebecca English revealed today the couple will carry out a total of 51 engagements on the three stops of their tour, or an average of more than five day. The post prompted praise from fans, pictured, who said they are the ‘gold standard’

One posted: ‘My goodness, what an incredible workload. As usual though, they will do it all with cheerfulness and good humour. Again, a credit to the Queen and UK.’

Another tweeted: ‘That is amazing, i am feeling tired just at the thought of it.’ A third added: ‘They are, as usual, the gold standard.’

And it is unlikely to get any easier for them with the departure of the Duke and Duchess of Sussex, who would have helped to shoulder the burden of their trips abroad on behalf of the Queen and the British government, particularly in the Commonwealth.

Scott Furssedonn-Wood, Charles and Camilla’s deputy private secretary, said the couple were well known for packing in as many engagements as possible, both on overseas visits and in UK.

He said: ‘That’s the way they operate overseas, and then that’s the way with operate here in the UK as well, with over 600 engagements over the last year, 20 countries visited on behalf of the United Kingdom. It’s an impressive work rate.’ 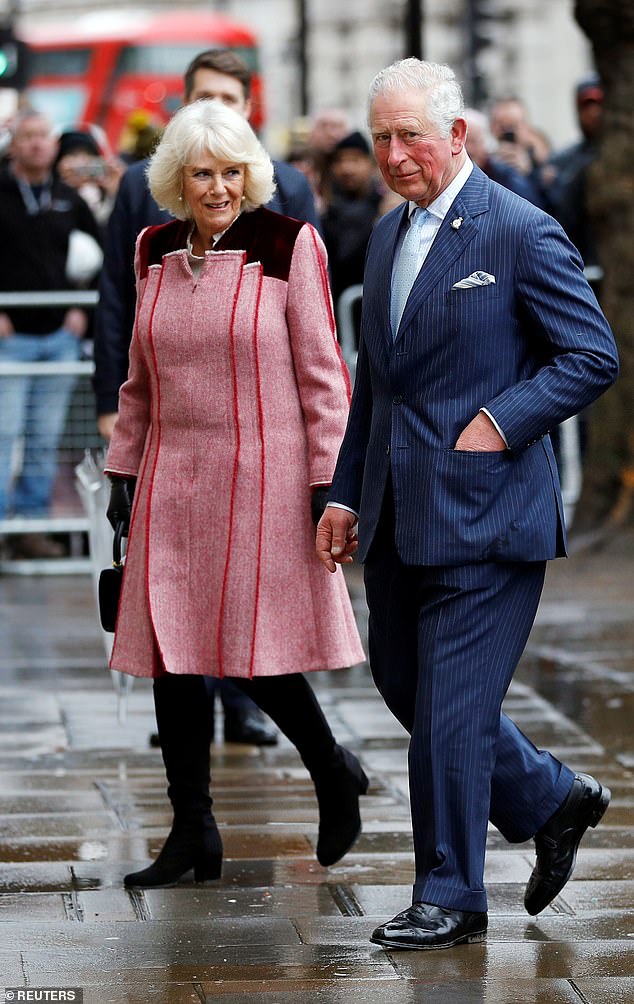 Clarence House announced yesterday that Charles, 71, will arrive in Bosnia and Herzegovina for a two-day visit on March 17 before being joined by his wife Camilla, 72, in Cyprus from March 18-21 and ending in Jordan on March 21-25. Pictured, the couple in London this month

The tour of Cyprus – the first since the Queen’s visit in 1993 – comes in the year marking the 60th anniversary of the island’s independence from British colonial rule.

The Queen’s trip was met with protests amid objections to the monarch receiving the golden key to the capital, Nicosia.

Cypriot nationalists held the Queen personally responsible for the executions in 1955 of nine Eoka guerrilla fighters arrested during the violent independence struggle, saying she could have commuted their death sentences.

The Duke and Duchess of Cambridge went to RAF Akrotiri in December 2018, but the military base is in the Western Sovereign Base area, a British Overseas Territory.

Cyprus has been divided since Turkey invaded in 1974 after a failed coup by supporters of union with Greece.

The packed schedule left royal fans in awe, with many tweeting to say they are ‘tired at the thought’ of the workload. Pictured, a selection of the tweets shared in support of the couple

The island joined the EU in 2004, but only the southern part enjoys full membership benefits.

The royal visit is aimed at celebrating ties between the island and the UK, and the programme will include a trip to the UN Buffer Zone to acknowledge the peacekeeping work being undertaken by the UN, and highlight initiatives aimed at building links between the communities of Cyprus, with the couple meeting both Greek-Cypriot and Turkish-Cypriot community members.

Charles will also make a solo visit to Bosnia and Herzegovina to pay his respects in the 25th anniversary year of the Srebrenica genocide, carrying out engagements in Sarajevo and Srebrenica.

He will visit the memorial at Srebrenica and pay his respects to the victims of the mass slaughter, accompanied by survivors and mothers who are still looking for their missing family members.

More than 8,000 Muslim men and boys were murdered by Bosnian Serb troops in the town in July 1995 in the worst atrocity in Europe since the Second World War.

Charles has previously met families of the missing, and has a long-standing commitment to post-conflict reconciliation in the Western Balkans.

In Jordan, Charles and Camilla will also hear how the country is supporting its large influx of refugees.

There are more than a million refugees in the Middle Eastern kingdom, the majority from war-torn Syria.

Charles will visit Bosnia and Herzegovina on March 17 and 18, be joined by Camilla in Cyprus from March 18 to 21, and they will be in Jordan together until March 25.