There won’t be another date! People reveal the rudest people they’ve met in their search for love – including a man who flirted with the waitress and one who told a woman to lose WEIGHT

These brave social media users have shared some of their very worst dating experiences.

Writing on anonymous sharing app Whisper, singletons from around the world revealed stories of the rudest suitors they’d met while dating and how it changed their outlook on the quest for love.

One person claimed their date told her that she was beautiful but ‘could do with shedding a couple of pounds’, while another  date argued with everyone around them and even playfully slapped her on the face.

Many claimed they had been on dates where the person they were spending time with paid little attention, as they chose instead to either look at their phone or flirt with the waiting staff.

People from around the world have revealed their rudest dating experiences to a thread on Whisper, including a person from England who was told that she should to lose weight 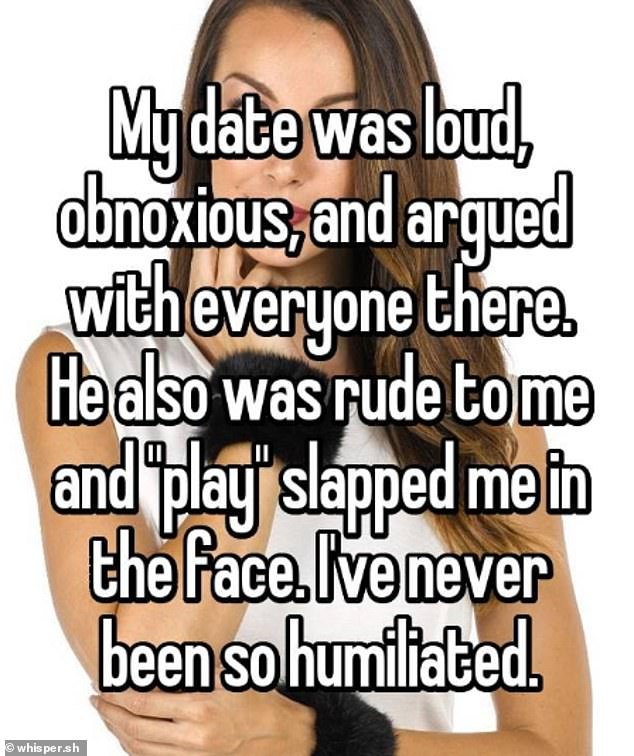 Not acceptable! Another woman, from Alabama, said she was left feeling humiliated after a suitor argued with everyone around them and even playfully slapped her on the face 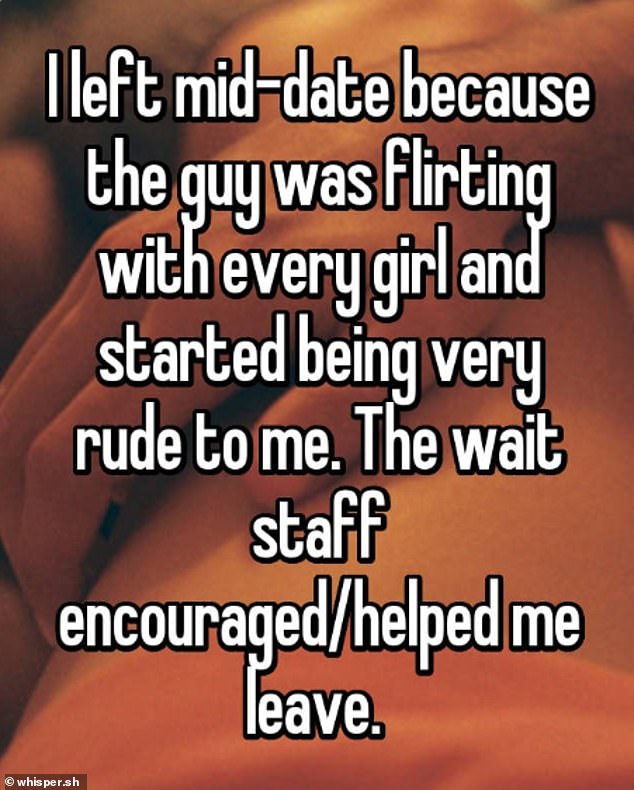 A woman, who lives in Ohio, confessed that she made the decision to leave during a date because the man she was with kept flirting with their waitress 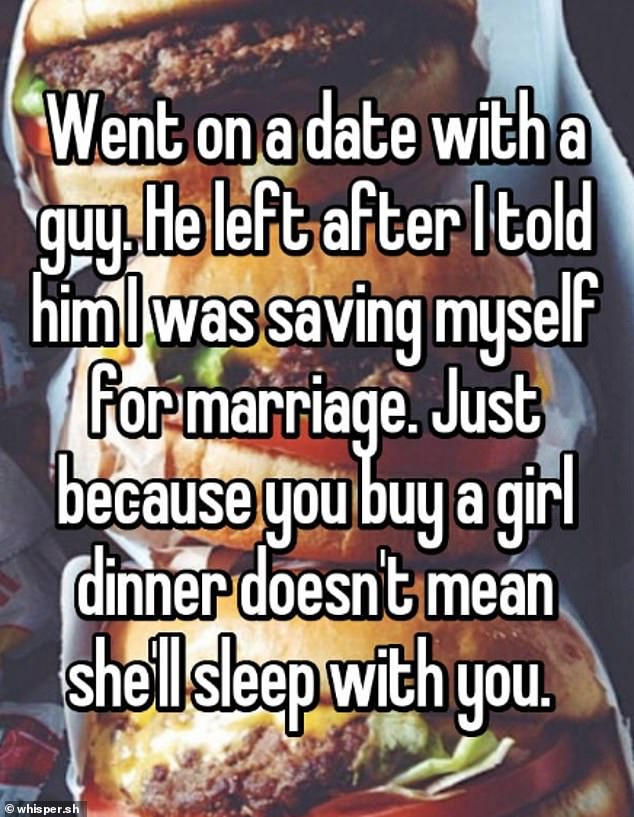 Another, based in America, revealed she was left alone after telling her date that she was saving herself until marriage 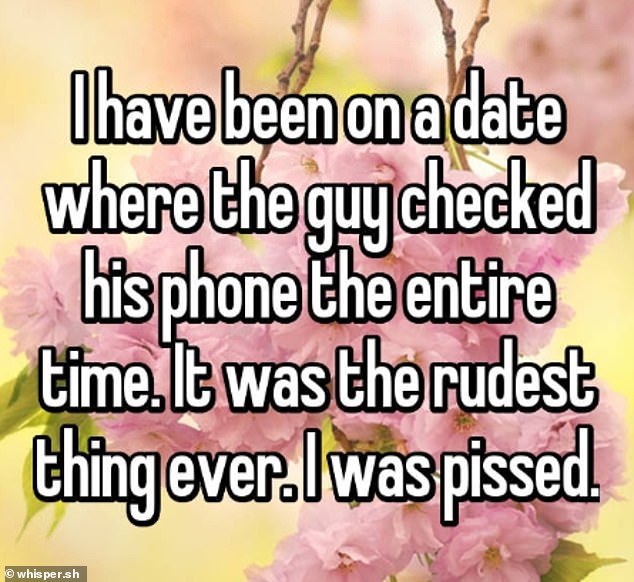 One person, from Lancashire, said they were horrified when their date ‘checked his phone the entire time’ while they were with one another 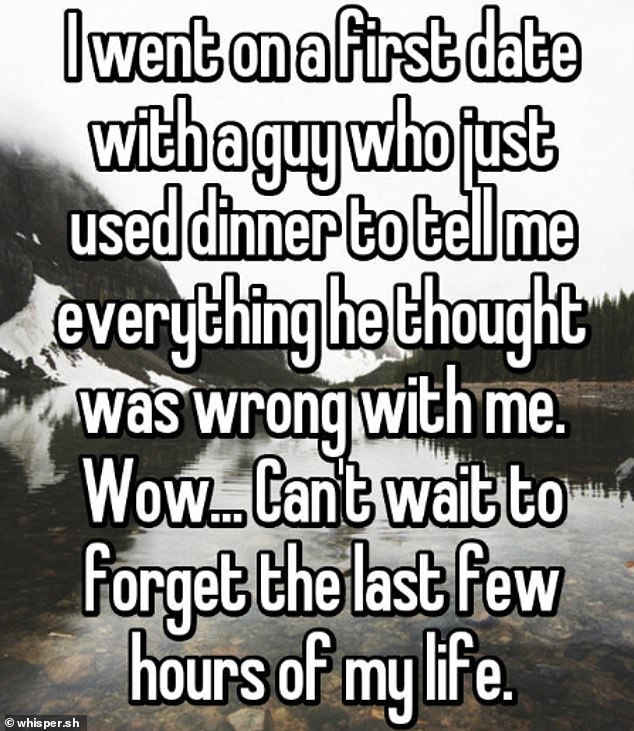 A woman, from Arizona, was left aghast when her date continually pointed out her flaws throughout their meal together 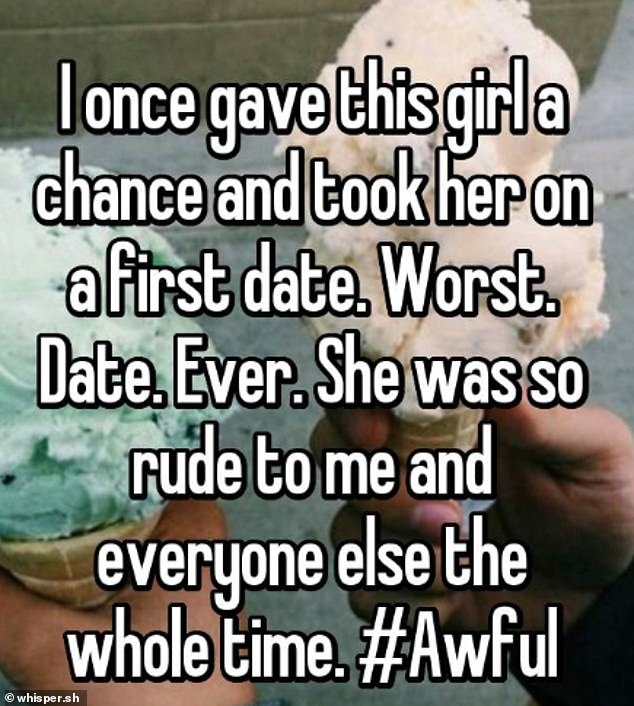 A man, who lives in Florida, recalled going on a date with a woman that spent the date being rude to everyone around them 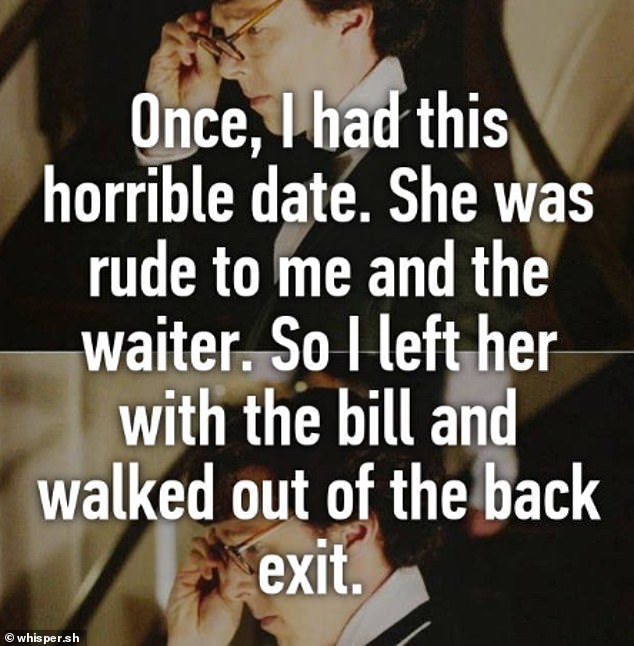 Snuck out the back! One man, from Connecticut, said his date had been so rude that he ended up leaving the restaurant mid-way through the evening 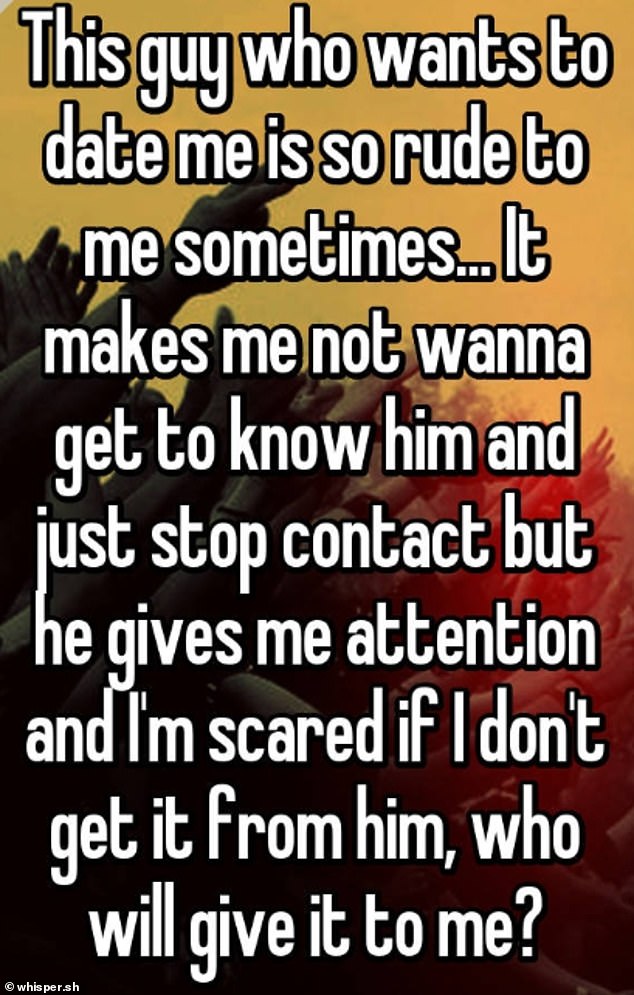 Another woman revealed she was dating a someone who could often be rude, but said she felt too scared of being without attention to break things off 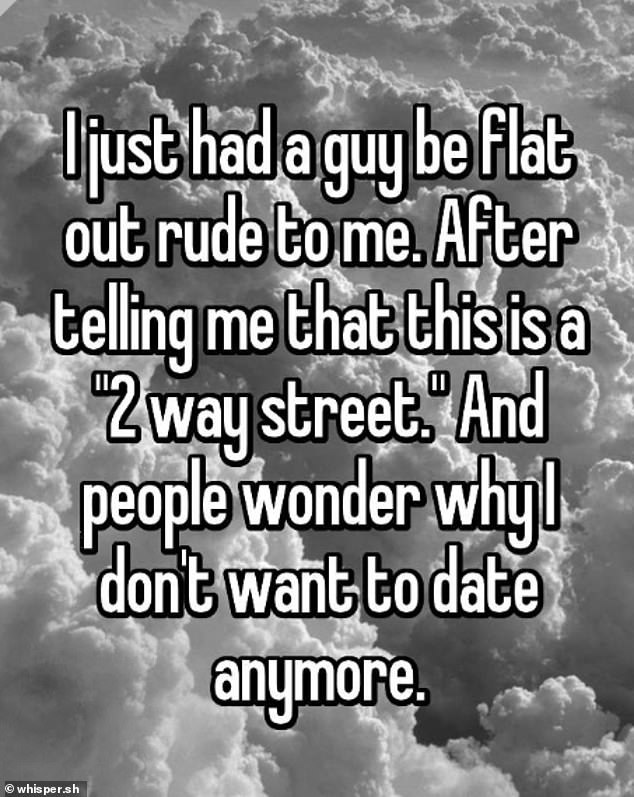 A woman, from Austin, said she’s been put off dating after spending time with a rude man who suggested she wasn’t making any effort when he declared their relationship had to be a ‘two way street’ 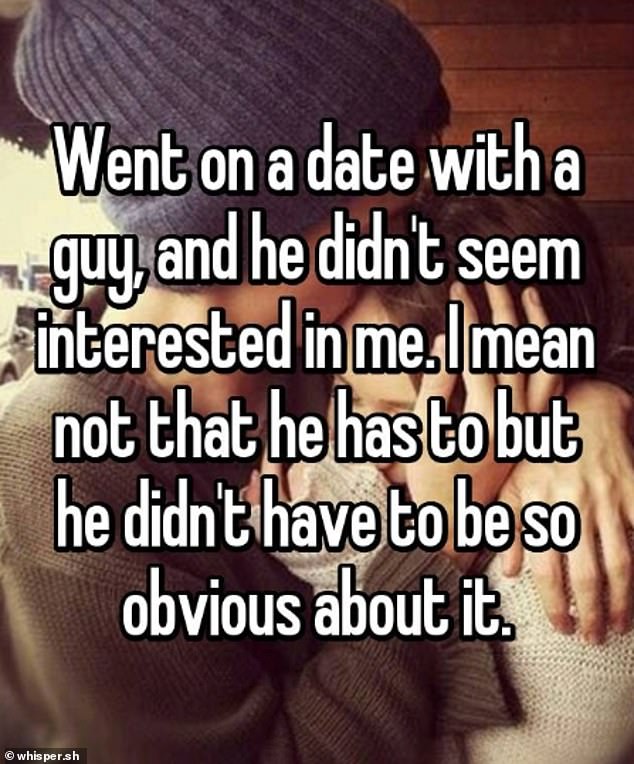 One woman, who lives in Rhode Island, recalled a date when her suitor had made it blatantly obvious he wasn’t interested in her 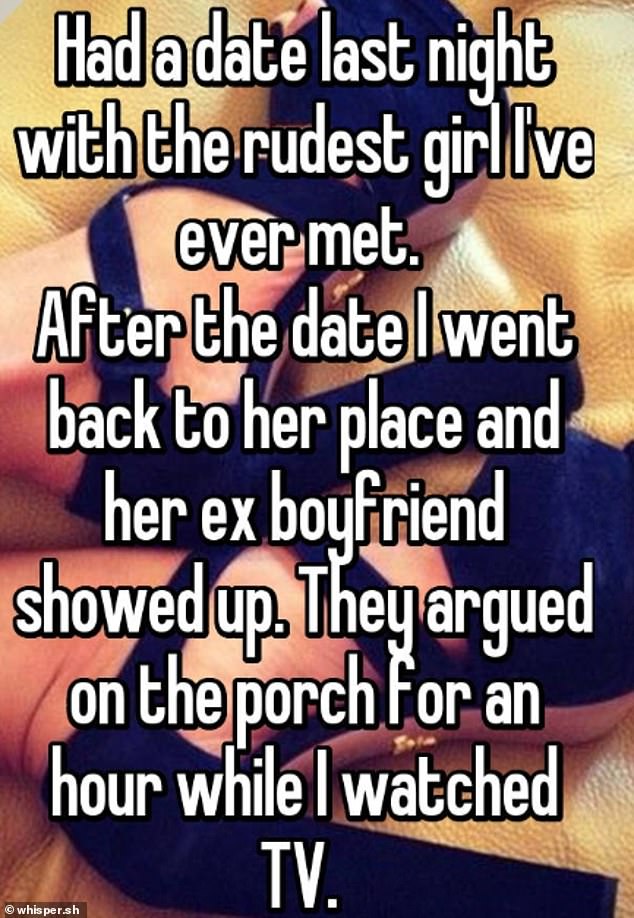 Another man, based in New York, was horrified when the girl he was dating argued with her ex boyfriend while they were relaxing at her flat, leaving him to watch TV 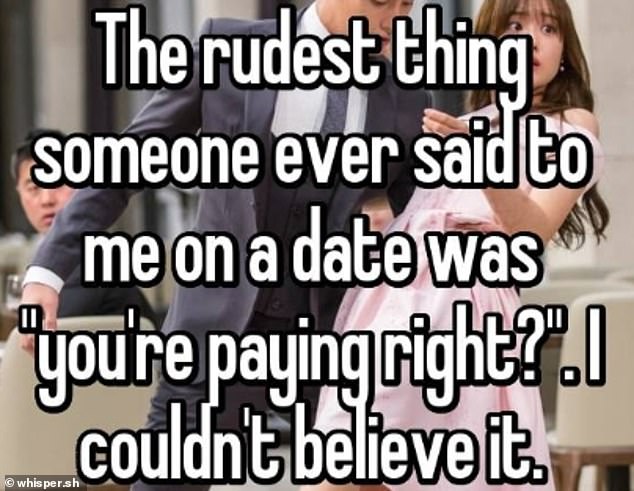