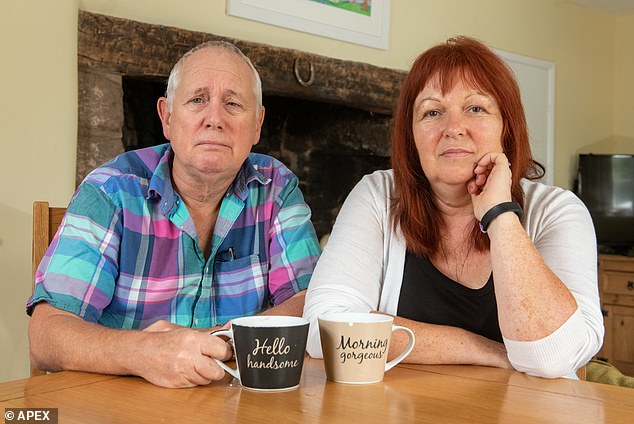 Life insurers could soon face an inquiry into the ‘cruel and unfair’ way they treat dying customers, Money Mail can reveal.

The insurance is supposed to provide you with the peace of mind that your loved ones will be financially secure if you die. Many policies will also pay out early if you are diagnosed with a terminal illness.

However, some are using small print to deny dying policyholders vital payouts.

Twice rejected: Grandfather of seven Peter Bull, who has terminal prostate cancer, with his wife Eileen

The problem is that many firms require customers to prove they have less than 12 months to live. But it is difficult even for doctors to predict how long someone has left, with many reluctant even to try.

It can mean customers end up going back and forth between their doctor and insurer to get the distressing paperwork required.

Even then, the insurer can still refuse to pay out if their own medical experts disagree with the policyholder’s specialist.

Money Mail has long campaigned for fairer treatment for the terminally ill. Time and again we have exposed how devastated families have been forced to spend their last months together battling insurers.

In some cases they have faced losing out on thousands of pounds because the amount policies pay out often reduces each month.

1. How long will it last? Some policies are for a fixed period of time, and if you die after they expire you will not receive a payout.

2. Will my premiums stay the same? Reviewable premiums may be cheap to begin with, but they typically increase as you get older and develop more health problems.

3. Do I have a pre-existing condition? If you fail to declare a health condition, your loved ones won’t receive a penny if you die.

4. Am I planning to move abroad? Some policies will not pay out if you move overseas because the insurer may consider the country a riskier location.

5. Will my payout shrink? If you buy level term life insurance, your payout will remain the same. However, a decreasing term policy will cut your payout over time.

The All-Party Parliamentary Group for Terminal Illness told Money Mail that it plans to investigate how insurers define terminal illness.

Sir Jeffrey Donaldson, vice-chair of the group, says: ‘We are hoping to set up an inquiry this month, as we know this issue is affecting a lot of terminally ill people. The group will first need to formally agree to proceed with it.’

The same group conducted a similar review of the Department for Work and Pensions (DWP) last year.

At present, benefit claimants can get higher payments and faster access to money if a doctor says they are not expected to live for more than six months.

But following an investigation, the group said this means terminally ill patients can be left without help because many doctors would not put this in writing.

A report later added that ‘the distress, delay and financial difficulties faced by terminally ill people and their families waiting for benefits’ were ‘not justifiable’.

It’s understood the DWP is looking at how to better support people nearing the end of their lives.

Scott Sinclair, of terminal illness charity Marie Curie, says: ‘Dying people should not be denied an insurance payment because health professionals cannot say for certain how long they have to live. Forcing terminally ill people to prove they have less than 12 months to live is cruel and unfair.’

Mother-of-four Ruth Lamont had her claim rejected after being told she was terminally ill.

The nursery school teacher had been rushed to hospital with suspected sepsis in December 2017 after visiting her GP because she felt sick and lethargic. She was later diagnosed with multiple myeloma, an incurable blood cancer.

Ruth, 53, says: ‘I was devastated when I found out it was terminal and immediately thought of my children.’ 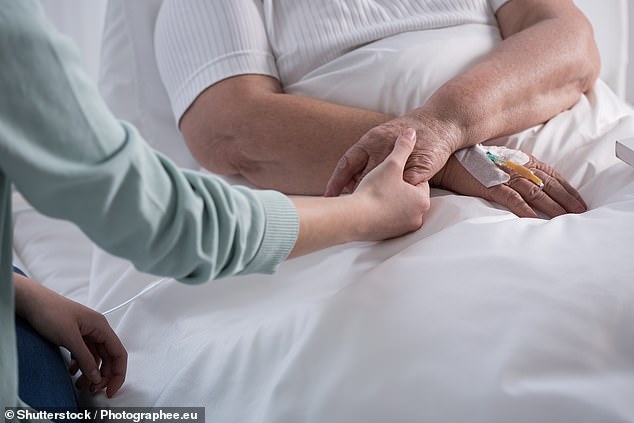 Cruel blow: The insurer can still refuse to pay out if their own medical experts disagree with the policyholder’s specialist

Ruth and her husband, a 55-year-old engineer, had paid £210 a month for life cover with AIG since September 2017. The policy entitled them to a £380,000 payout if one of them died or was diagnosed with a terminal illness. But when the couple made a claim eight months after Ruth’s diagnosis, it was rejected.

The policy stated that a terminal illness meant she must have less than 12 months to live, and her consultant had said the ‘median’ life expectancy of someone with her condition was 83 months.

Ruth, who lives in County Down, says: ‘You are basically being told you are not terminally ill enough to receive the money.’

An AIG Life spokesman says: ‘We assess claims based on policy conditions to ensure that customers are treated fairly and equitably.’

Peter Bull, 66, is unlikely ever to receive his £150,000 payout from Aviva. When the grandfather of seven was diagnosed with prostate cancer in 2015, it had already spread and is incurable.

The retired NHS manager, who is married to Eileen, 61, a retired admin worker, had been paying £49 a month into a life insurance policy with Aviva, but when he tried to make a claim it was rejected because he was not expected to die within 12 months.

The rejection letter stated that patients entered into a clinical trial he was due to take part in survived for at least two years, according to median figures.

Peter tried to claim again a year later, but received another rejection. He took his case to the Ombudsman, but it ruled in Aviva’s favour. Since taking early retirement due to his illness, Peter has had to draw down £100,000 from his pension and downsize his house in Exeter.

His policy, taken out in 2013, had only a six-year term and expired in April last year.

The father of four hopes to take legal action against Aviva, but cannot afford to do so at present.

He says: ‘I try not to think about the fact I may never get my payout, because I feel awful when I do and I know how important mental health is when you’re fighting a terminal illness.’

An Aviva spokesman says: ‘We understand Mr Bull remains disappointed that we did not pay his claim, but the medical evidence that we received during those years did not support the criteria for terminal illness benefit.’

An Association of British Insurers spokesman says: ‘Insurers know this is an extremely difficult time for policyholders and their families, so will assess claims based on the individual’s circumstances as quickly as possible.’