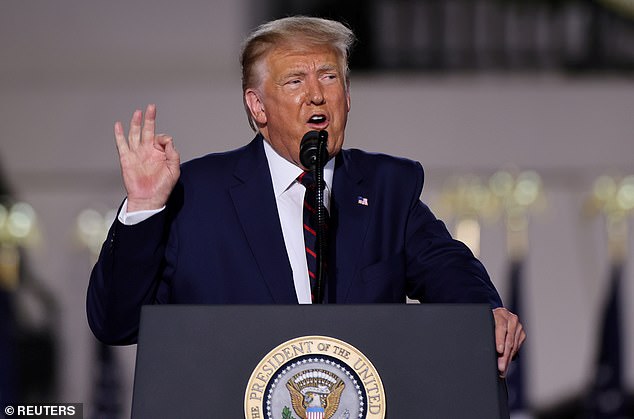 Donald Trump moves to DEFUND ‘anarchist’ cities’: President orders review to revoke federal funds from NYC, Portland, Seattle and Washington DC because they have allowed ‘lawless’ protests and a surge in crime

By Keith Griffith For Dailymail.com

President Donald Trump is taking steps to revoke federal funds from New York City and other cities he says are descending into ‘anarchy’, according to a new report.

Trump on Wednesday signed a five-page memo ordering all federal agencies to send reports to the White House Office of Management and Budget on federal funds going to four cities that can be redirected, according to the New York Post.

In addition to New York, the memo names Seattle, Washington DC and Portland, Oregon as potential targets for revocation of federal funds.

‘My Administration will not allow Federal tax dollars to fund cities that allow themselves to deteriorate into lawless zones,’ Trump says in the memo, according to the Post.

President Donald Trump is taking steps to revoke federal funds from New York City and other cities he says are descending into ‘anarchy’, according to a new report

‘To ensure that Federal funds are neither unduly wasted nor spent in a manner that directly violates our Government’s promise to protect life, liberty, and property, it is imperative that the Federal Government review the use of Federal funds by jurisdictions that permit anarchy, violence, and destruction in America’s cities.’

Simultaneously, Trump ordered Attorney General Bill Barr to develop a list within 14 days of ‘anarchist jurisdictions’ that ‘permitted violence and the destruction of property to persist and have refused to undertake reasonable measures’ to restore order.

The order does not name the cities that Barr should investigate, giving the attorney general discretion as to which cities to designate.

The memo also instructs White House budget director Russ Vought to issue guidance in 30 days from Wednesday ‘to the heads of agencies on restricting eligibility of or otherwise disfavoring, to the maximum extent permitted by law, anarchist jurisdictions in the receipt of Federal grants.’

The amount of funding in question could be massive, with federal grants making up $3.7 billion of DC’s annual budget, and a whopping $7 billion in New York.

Many of those funds are devoted to Medicare and social services programs, however it was not immediately clear which types of funds would be effected by the order.

In the memo, Trump detailed allegations of local mismanagement against each of the cities named, saying that New York was included because violent crime has skyrocketed even as Mayor Bill de Blasio moved to defund the NYPD.

Developing story, check back for updates.