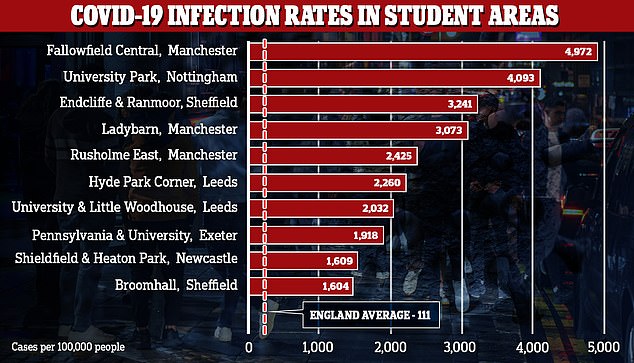 Coronavirus outbreaks in student areas are significantly worse than in other parts of the country and in one part of Manchester one in 20 people are currently carrying the disease.

Known for living in large households, mixing with strangers and having very active social lives, students create arguably the ideal environment for a Covid-19 outbreak.

But their age means that many of them will not experience symptoms of the illness, even fewer will get seriously ill and almost none will die.

However, their huge communities can fuel outbreaks in areas that are already badly affected and make it more likely that vulnerable local people will be exposed to the illness.

Data analysed by The Times show in Fallowfield in Manchester – a thriving student suburb of the city – five per cent of people tested positive for the disease in the week ending October 2.

This is equivalent to a weekly coronavirus infection rate of almost 5,000 cases for every 100,000 people. A per-100,000 rate is the standard way of measuring Covid-19 infections, although Fallowfield’s population is only around 15,000 people.

This rate dwarfs that of the hotspot when entire council areas are taken into account – Nottingham has the highest whole-area rate with 689 cases per 100,000.

The Times’s analysis shows that, in the seven days ending October 2, there were 18 student areas where more than one per cent of the population had tested positive for Covid-19.

Student areas were defined as those where more than half of the areas within it were described as predominantly student areas in the 2011 Census.

And the numbers of positive tests were compared to the population in the area.

While Nottingham, the worst affected city according to test results analysed by the Press Association, has the highest rate of any local authority at around 0.06 per cent of the population infected, rates were considerably higher in university boroughs.

There, 451 people tested positive in the week up to October 2, indicating four per cent of the population was diagnosed.

Scientists acknowledge that the virus will inevitably spread more among university students, who are mostly teenagers and those in their early 20s, because of their lifestyles.

Dr Simon Clarke, a microbiologist at the University of Reading, told MailOnline that they often live in ‘densely populated areas’.

WHICH 10 STUDENT AREAS HAVE THE WORST OUTBREAKS?

This is how Covid-19 infection rates look in some of England’s worst-hit student areas.

The rates were calculated by The Times as positive tests per 100,000 people in the population between September 26 and October 2.

All areas have populations smaller than 100,000, but the rate is a standardised measure used across the country for ease of comparison.

‘We know there’s a problem at Manchester uni and, I believe, at Liverpool,’ he said this week when discussing the worsening outbreak in England’s North West.

‘Even if students as an age group aren’t generally one to be taken very ill, they can spread [the virus] to the rest of the communities.

‘Those cities have large night-time economies as well. That’s the thinking behind the 10pm curfew, that who wants to measure out two metres when you go to the pub with your friends? You forget [about social distancing] when you’re talking and socialising.’

But, he said, students aren’t entirely to blame, adding: ‘It is largely out of people’s control but students and young people get a lot of blame. There is evidence of rule-breaking but there isn’t evidence that it’s extensive enough to cause rising infections.’

Among the 10 worst-affected student areas – all of which had infection rates equivalent to 1,600 per 100,000 or higher – almost all were in Northern England.

Outside of two districts in Nottingham and Exeter, all were in Manchester, Sheffield, Leeds and Newcastle.

Three of the top five were in Manchester, which is expecting to be hit with tough local lockdown rules next week which could involve pub and restaurants being forced to close.

Coronavirus continues to run rampant through universities with 91 institutions in the UK now thought to be affected and more than 5,000 students infected – with some ending up in intensive care.

Overnight it emerged Newcastle University has seen more than 1,000 students test positive for coronavirus over the past seven days.

That came on top of the 770 positive tests among students at neighbouring Northumbria University which were announced last Friday.

Staff at Northumbria have voted to ballot for industrial action and called on the vice-chancellor to resign.

As five of the UK’s largest universities announced they would shift to online classes in a desperate move to curb outbreaks, staff are now moving towards industrial action.

President of the University and College Union Vicky Blake, said staff at Leeds, Birmingham and Warwick have voted in favour of disputes or strike ballots over coronavirus risks. 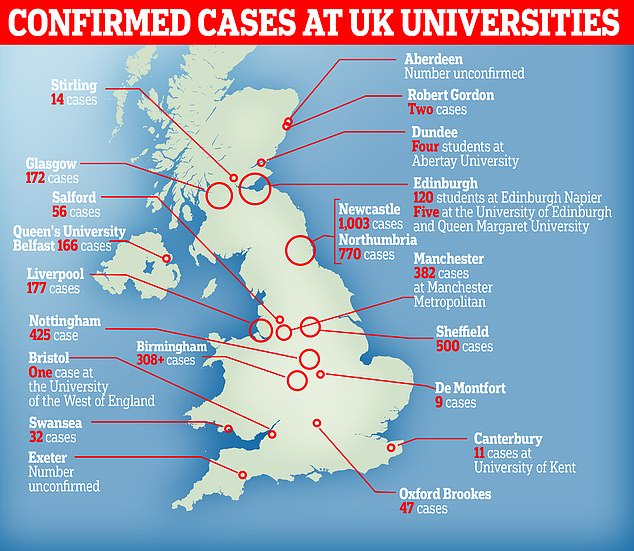 She warned: ‘You will see a theme emerging of staff betrayed by their employers who have spent the summer spinning and selling the myth of a “Covid safe” student experience that is now dangerously unravelling before all of our eyes.’

And students hunkered down in halls of residence at universities including Aberdeen, Manchester, Northumbria and Reading, are now facing fines in excess of up to £500 for breaking rules.

Several institutions have begun fining students for throwing parties or failing to self-isolate.

According to the Guardian, Aberdeen University has taken disciplinary action against 29 students, with 22 fined £125 for breaching Covid guidelines.

At Northumbria University students can be fined up to £500 and can be kicked out of university accommodation and their courses, the Guardian reports.

Last week, two students were with a £200 fine following an illegal party at a halls of residence used by Coventry University which saw around 200 people attend.

Northumbria and Newcastle universities followed suit, with lectures delivered virtually unless face-to-face teaching is an essential part of the course.

And the University area of Exeter confirmed a number of students had been sent home for ‘breaching Covid guidelines.’

Following the announcement, the University and College Union (UCU) warned of a ‘serious threat’ of industrial action from members.