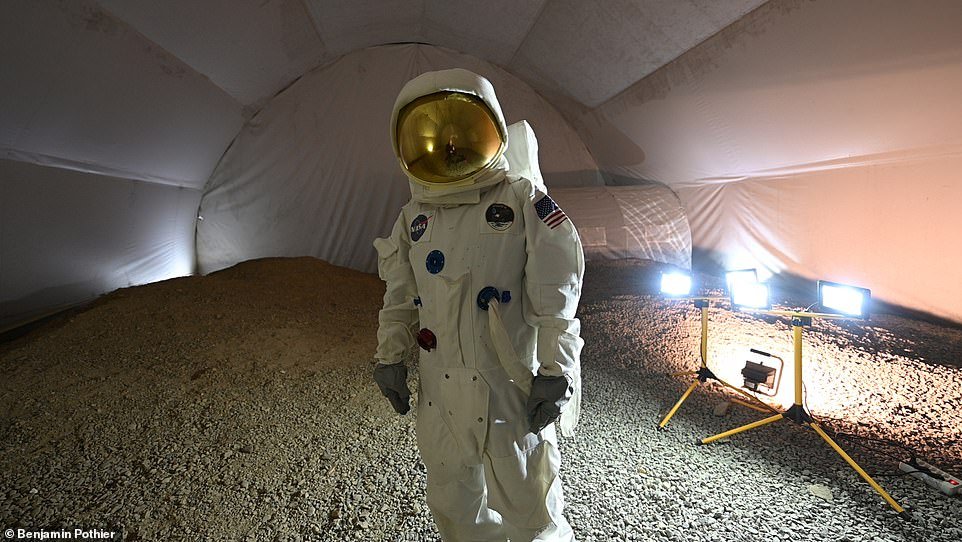 Looking for something cosmic for your next holiday?

Then try a simulated space mission inside a former nuclear bunker near the Polish city of Pila that has been repurposed to mimic the International Space Station – and the surface of the Moon.

The ex-military airport installation, once used to store SU-22 fighter-bombers, has been transformed into the Lunares research station, which runs two-week stays – or ‘missions’ – for six hand-picked recruits. They pay £1,505 (€1,750) each for the chance to sample an astronaut’s life in space, complete with freeze-dried food, ‘Moon walks’ and science experiments. But minus the zero gravity.

Lunares research station runs two-week stays – or ‘missions’ – for six hand-picked recruits. They pay £1,505 (€1,750) each for the chance to sample an astronaut’s life in space – and on the Moon (pictured) 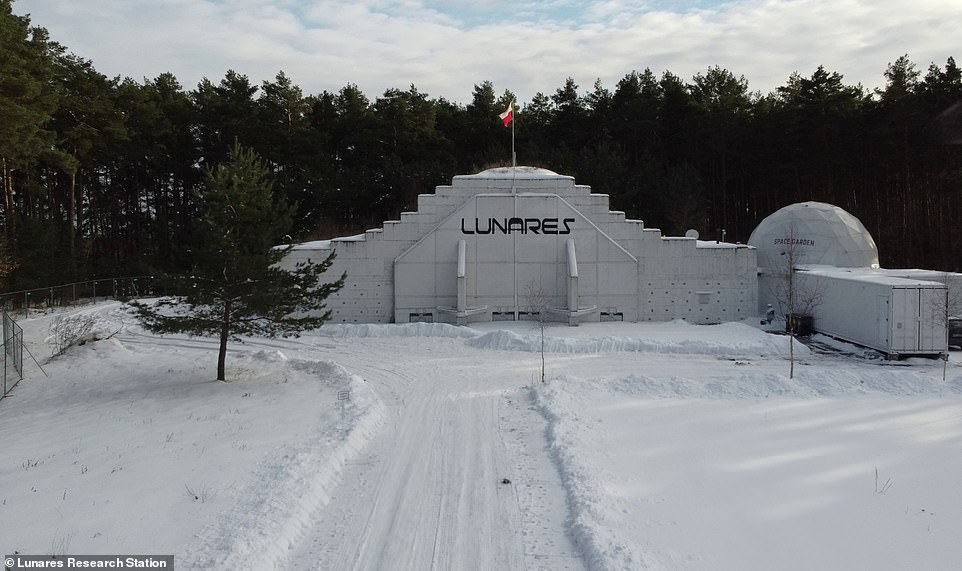 Recruits need to be Covid-tested before entering the bunker and must have a relevant bachelor’s degree and good English. Unsurprisingly, it is not recommended for claustrophobia sufferers 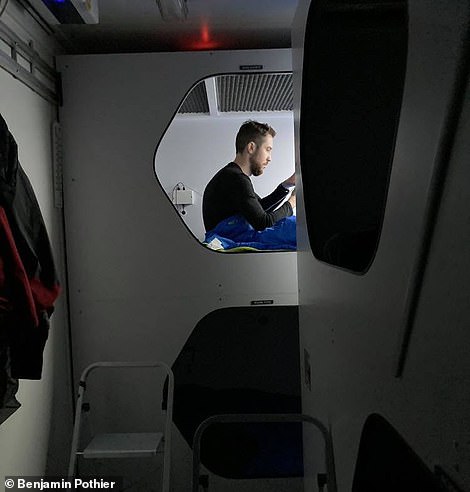 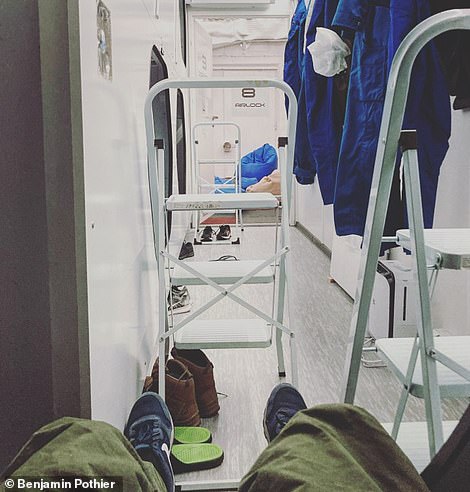 Benjamin Pothier, 46, a scientist from France, led a two-week trip ‘to space’ at Lunares in February. These pictures he took show the station’s six-person dormitory. Pothier said that the beds were very comfortable and that he slept well each night

Recruits need to be Covid-tested before entering the bunker and must have a relevant bachelor’s degree and good English.

Unsurprisingly, it is not recommended for claustrophobia sufferers.

Benjamin Pothier, 46, a scientist from France, led a two-week trip ‘to space’ at Lunares in February.

He was physically shut off from the outside world with no natural light and no escape from his fellow guests and told MailOnline Travel that the constant pandemic lockdowns were good training for the exercise. His academic background also helped.

He said: ‘I was the commander and I am a human factor expert for these kinds of experiences for international institutions like the Human Spaceflight Committee of the International Astronautical Federation.

‘So I was quite prepared. The overall crew was well composed, with a gender balance and everything went really well between us.

‘We had some very small issues on some topics, but nothing important. We did a group morning yoga session every day and that probably helped a lot.’

The main point of their ‘mission’ was to investigate how greywater from showers and sinks could be filtered and repurposed for the likes of flushing the toilet and watering plants. 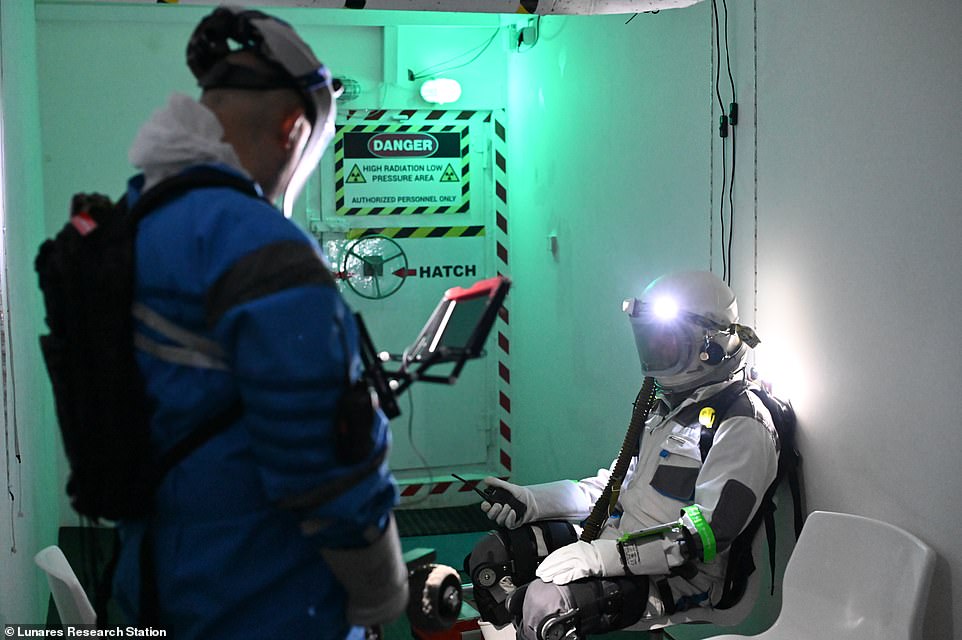 While staying at the Lunares base, participants carry out various experiments to help further our understanding of the impacts of living in confinement and without daylight 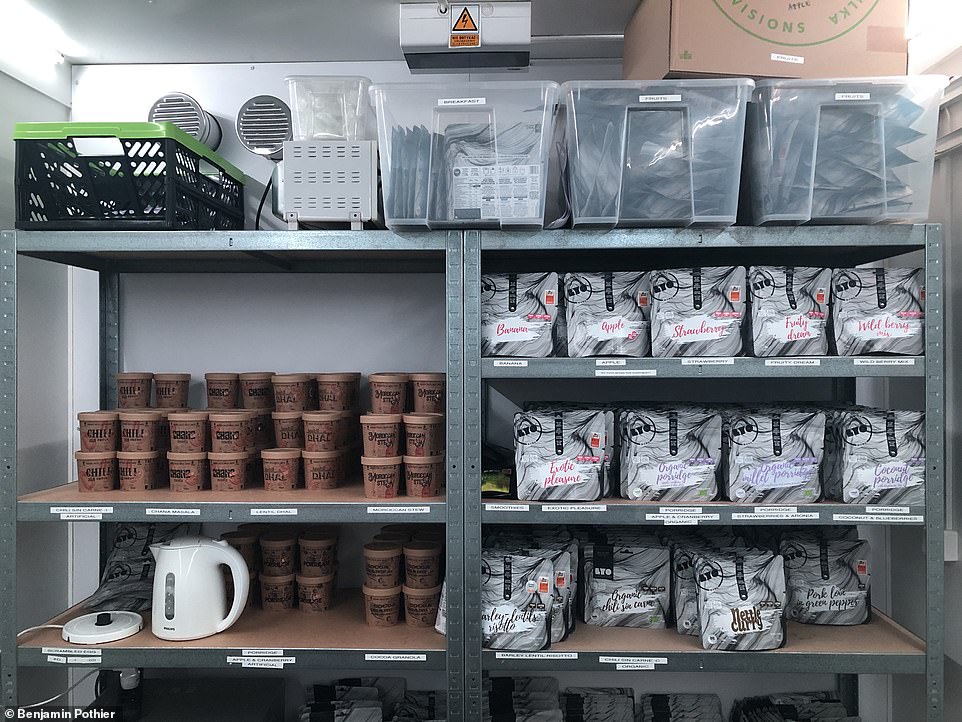 All of the meals at the Lunares base are freeze-dried, as they would be in space. Pothier’s favourite was penne Bolognese 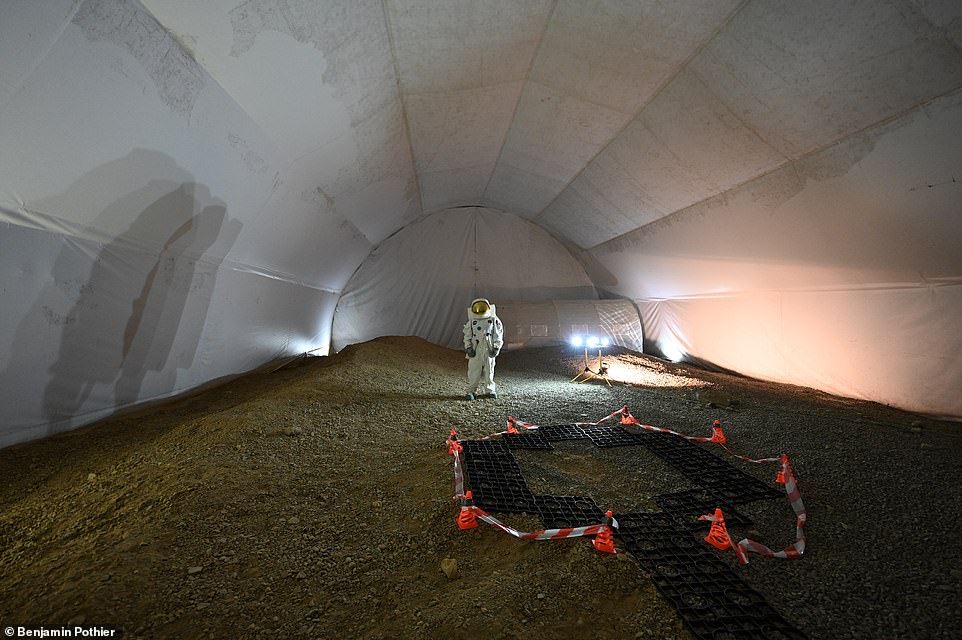 Spaced-out: While ‘on the surface of the Moon’, the team test various pieces of equipment, including robotics, to contribute research data for future developments

Several hours a day were spent wearing spacesuits in an adjoining hanger carpeted in rubble and dust to simulate the surface of the Moon.

The spacesuits have a rigid bottom half so that movements are restricted, similar to how they would be when walking in space.

While they are ‘on the surface of the Moon’, the team test various pieces of equipment, including robotics, to contribute research data for future developments.

During Pothier’s mission, he said that a typical day in the bunker started with a wake-up call at 7.30am, followed by the morning yoga session, a hearty bowl of freeze-dried porridge, and several medical checks for heart rate, weight and blood pressure.

Next came experiments that tracked the team’s grip strength and stability to monitor the impact of living in isolation on selected motor abilities and posture. 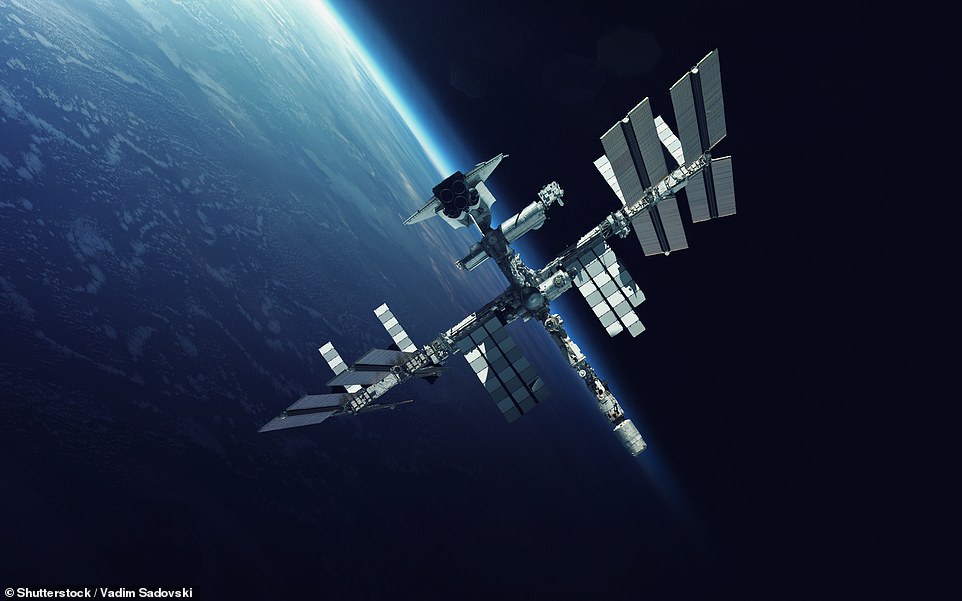 The Lunares recruits do not live in zero gravity as they would on the actual International Space Station (pictured), but they do spend several hours a day in awkward spacesuits 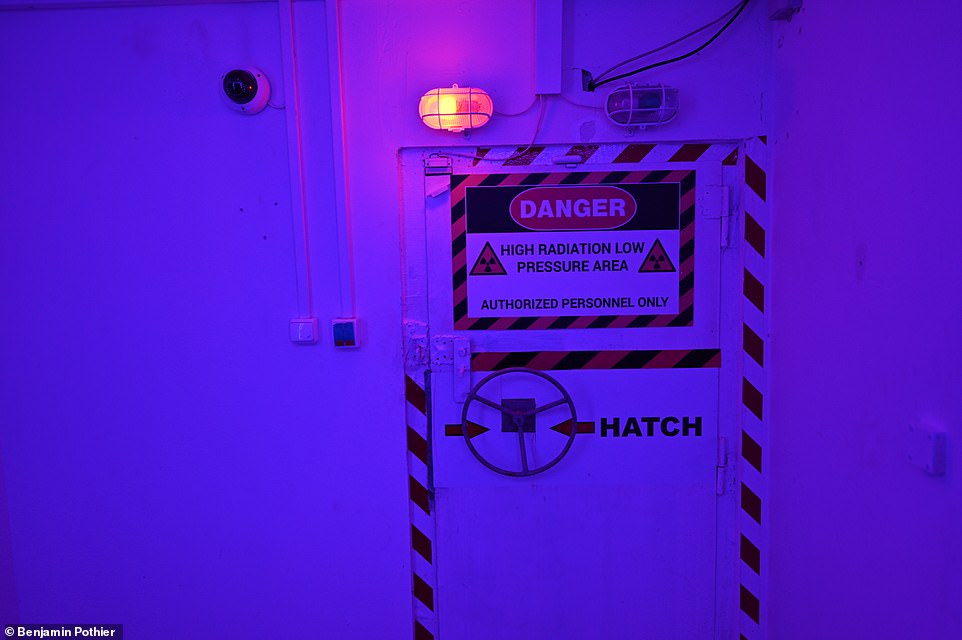 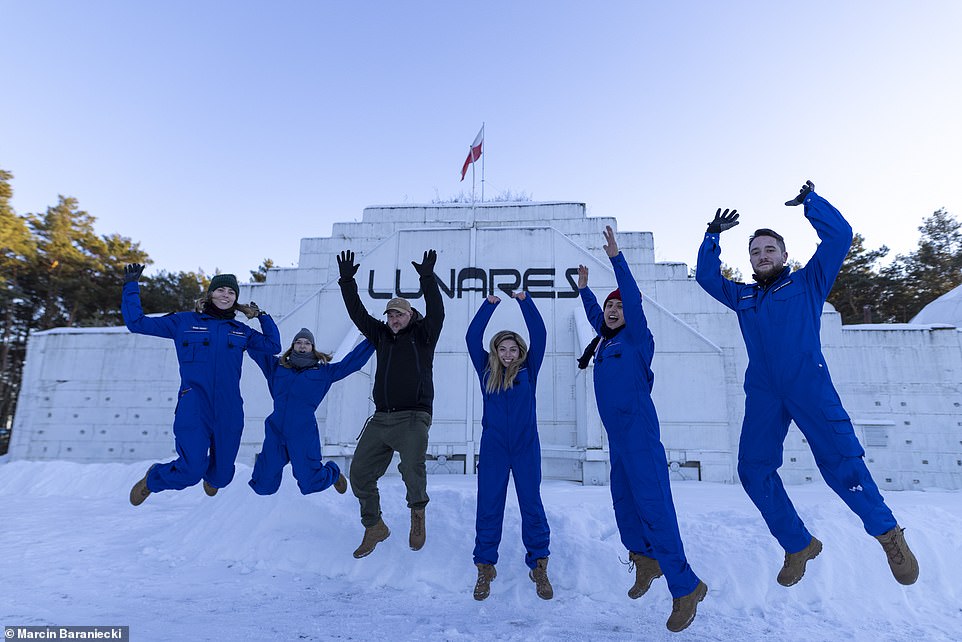 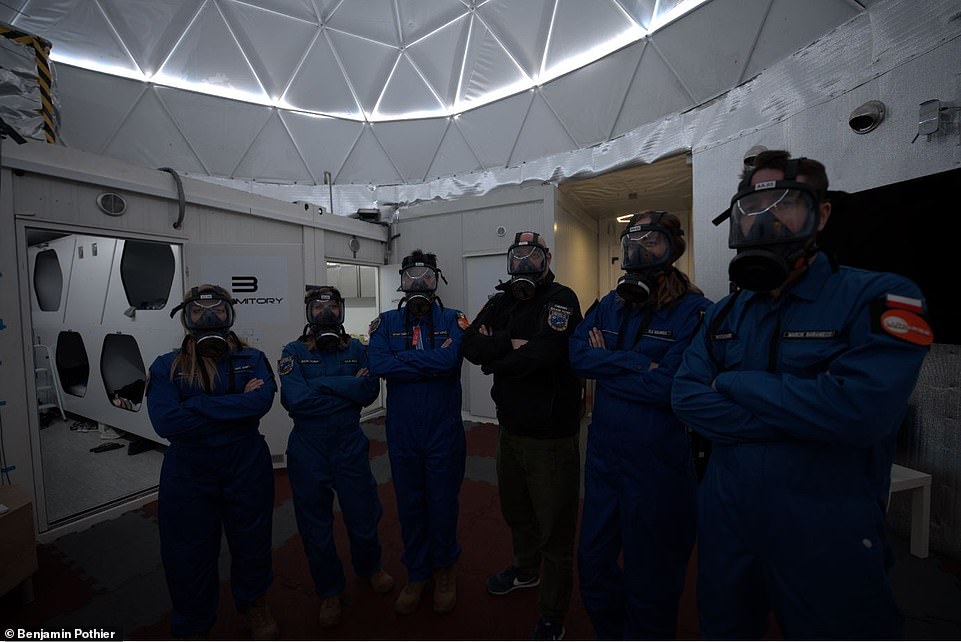 After they had their medical tests, the team would carry out various tasks including cleaning, ensuring the water supply was working and preparing lunch.

In the afternoons, they conducted their ‘Moon landings’ with two people at a time going for ‘Moon walks’ with the resident lunar rover, Leo.

Once everyone was ‘back on board’, an hour of mandatory physical training would begin. The station is equipped with a treadmill and various training accessories.

During real space missions, due to the weightlessness, ‘astronauts need to practice two mandatory hours of physical training to prevent muscle and bone mass loss due to the effects of gravity and it’s also good for some mental time-out’.

In the evening was more freeze-dried food – Pothier’s favourite was penne Bolognese – and perhaps a movie or two.

Pothier said: ‘There was a TV and Wi-Fi, the way it will probably be in a couple of decades’ time on the Moon. Of course, we had some movie nights together, and we watched a lot of space-related movies and documentaries.’

Pothier said: ‘I slept extremely well. Though we were in a dormitory the ventilation system is excellent and the bed was very comfortable. The busy daily schedule might be another reason why I slept so well.’

The lack of natural light is found to affect many people and a survey of U.S. space shuttle crews found that half depended on medication to go to sleep in orbit. 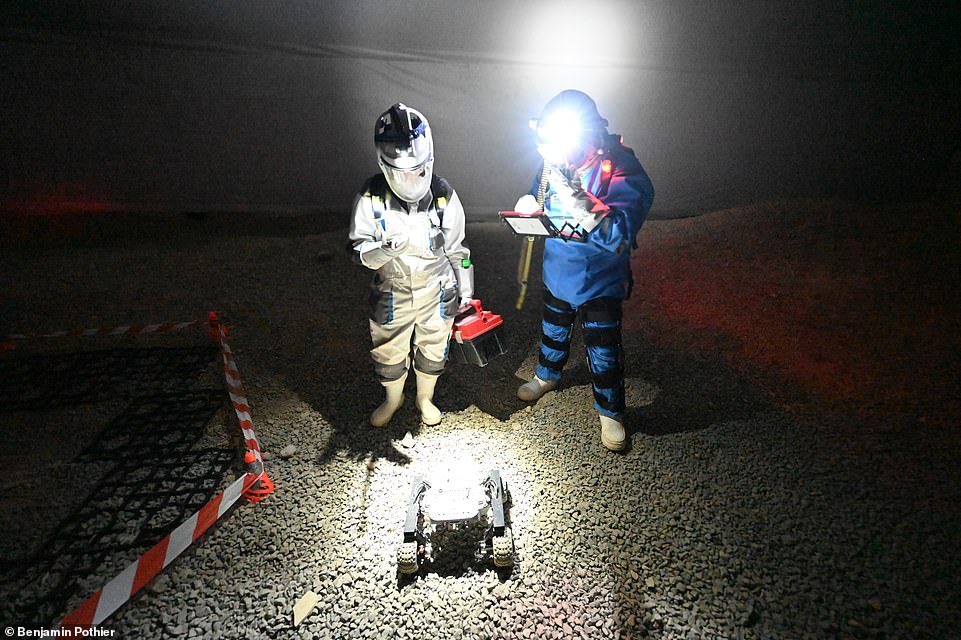 In the afternoons, the crew conducted their ‘Moon landings’ with two people at a time going for ‘Moon walks’ with the resident lunar rover, Leo (pictured) 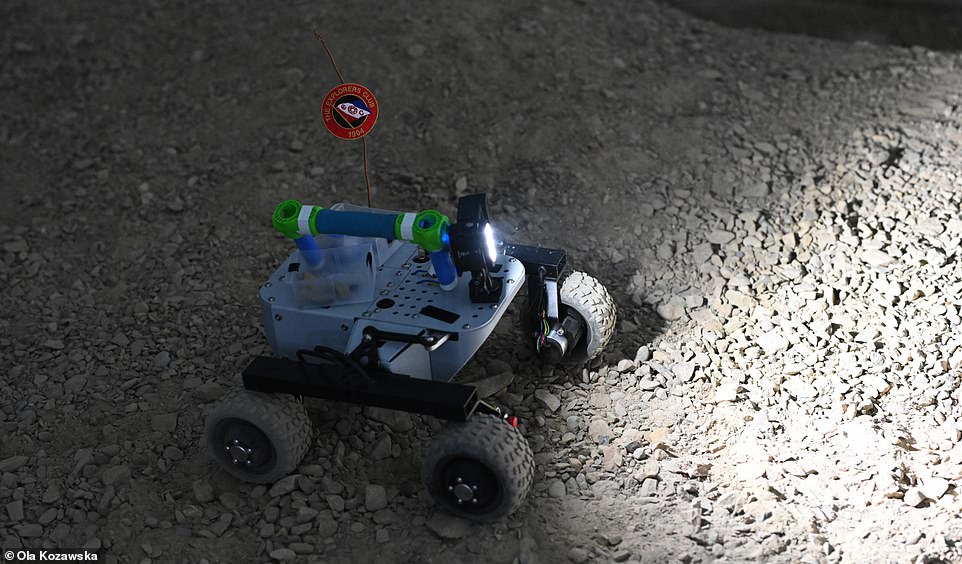 Pothier said that the constant pandemic lockdowns proved to be good training for the Lunares stay. Pictured is rover Leo exploring the ‘lunar terrain’ yet again 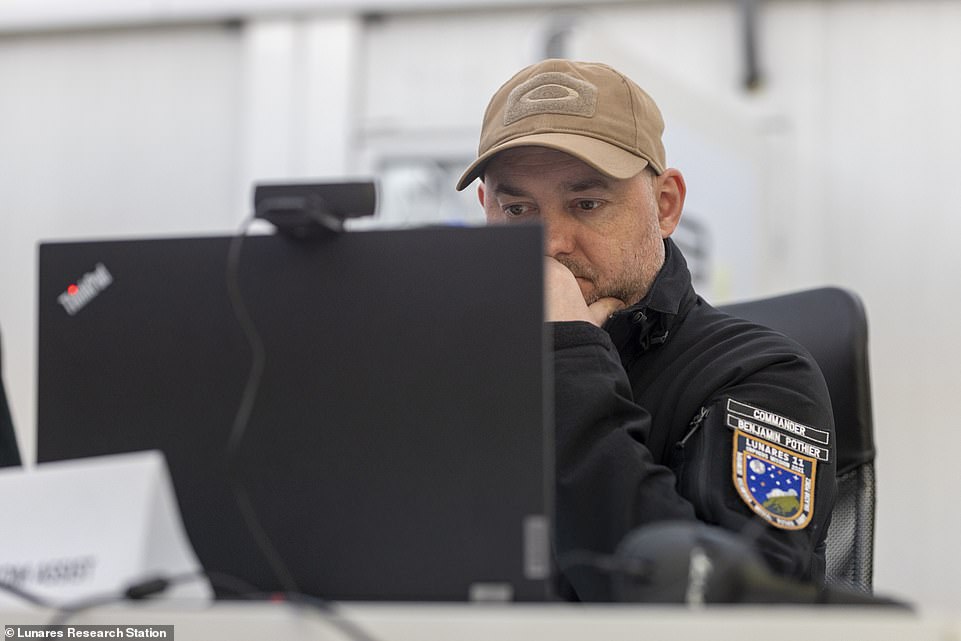 Pothier, pictured, is a human factor expert for international institutions like the Human Spaceflight Committee of the International Astronautical Federation 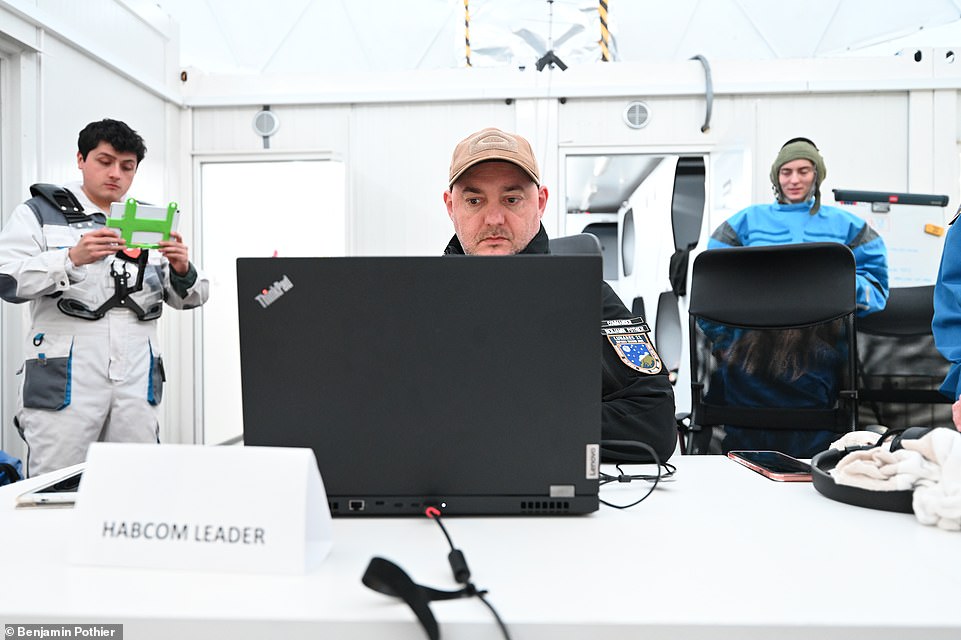 Other space-dwellers have reported disrupted body clocks, a condition that has been linked to various health problems. Lighting aboard the International Space Station has been updated over the years to try and counteract this impact.

Pothier said the lack of natural light didn’t bother him, although he did miss ‘waking up with the warm rays of the sun on my face’.

The space expert will be going on to participate in a Mars simulation later this year in the U.S. with the Moab desert the substitute for the alien red-rock landscape. 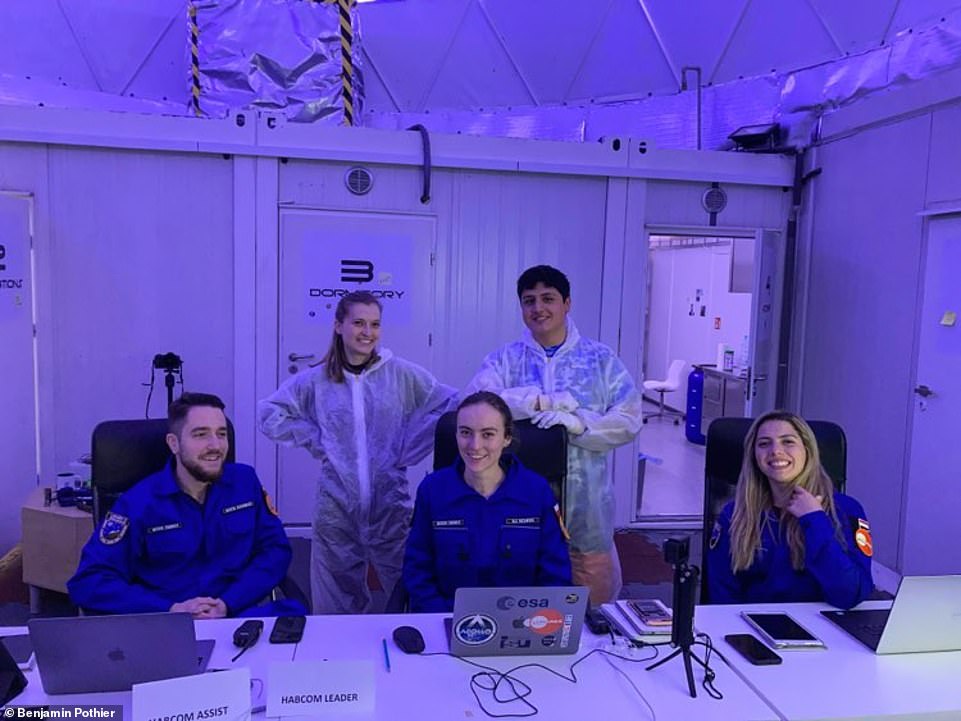 Some of the crew inside the atrium, which was used as the control room, after a Moon expedition

He concluded: ‘It’s really important to perform these kinds of experiments here on Earth and simulate as many aspects of space missions as possible. They are extremely useful if we are going to make a human base on Mars and for our next Moon landing, which will take place in 2024 as part of the Artemis III program.

‘I have taken part in many of these studies, including an isolation experiment conducted by the European Space Agency at a Nasa habitat in Hawaii pre-Covid-19.

‘Without doubt, these exercises are the best way to see how people cope in such environments, with limited room and human interaction, looking at the psychological and physical impacts.

‘They also provide a useful pool of data for researchers in disciplines as diverse as nutrition and food studies, psychology, human behaviour, biomechanics, neurology, and so forth.’

The bunker was repurposed as a simulated lunar base in 2017 and it is the only facility of its kind in Europe. Since its opening, dozens of simulated space missions have taken place with data collected from each expedition. The next Lunares mission is set to ‘take off’ on April 14, with seven more planned for 2021. For more information visit lunares.space. Benjamin Pothier can be found tweeting at twitter.com/benjaminpothier.