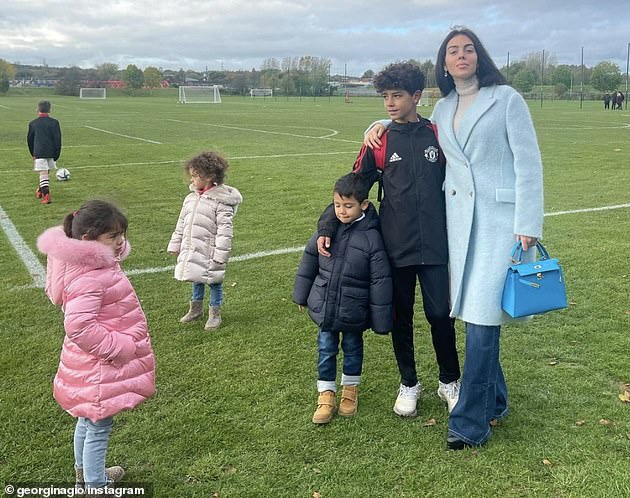 ‘Supporting my big boy’: Cristiano Ronaldo Jr, 11, is cheered on by his father’s partner Georgina Rodriguez and three siblings in a Manchester United academy game, the day after the superstar suffered derby defeat

Georgina Rodriguez spent her Sunday afternoon cheering on Cristiano Ronaldo Jr as he looks to follow in his dad’s footsteps at Manchester United.

The 11-year-old left the Juventus academy to join United after his father made a sensational return to Old Trafford during last summer’s transfer window.

Ronaldo Jr, who has been seen training alongside midfielder Nemanja Matic’s son, had the full support of Rodriguez and his three siblings during an academy game.

Georgina Rodriguez spent her Sunday afternoon cheering on Cristiano Ronaldo Jr, who was playing for one of Manchester United’s youth teams

Although the result of Ronaldo Jr’s first documented game in United colours is unknown, it is clear he received plenty of backing from his family.

Rodriguez was accompanied by Ronaldo Jr’s siblings Eva, four, Mateo, four, and Alana Martina, three, while cheering from the sidelines.

Rodriguez shared a picture of herself on the side of the pitch with Ronaldo Jr and the children. She captioned it: ‘Supporting my big boy,’ with football and heart emojis.

Last month Ronaldo revealed that his girlfriend is pregnant with twins. He took to Instagram to share the news with fans on Instagram and gushed their ‘hearts are full of love’.

Alongside a picture of the pair holding up an image of their pregnancy scan, Ronaldo, who will welcome his second and third child with Georgina, 27, wrote: ‘Delighted to announce we are expecting twins. Our hearts are full of love – we can’t wait to meet you.’

Ronaldo, 36, recently announced his girlfriend Rodriguez, 27, is pregnant with twins

The Instagram post came shortly after Cristiano Ronaldo’s mother, Dolores Aveiro,  claimed that her grandson was ‘better than his father was at his age’.

Aveiro said that Ronaldo Jr will reach the same heights his father and expressed her desire for the 11-year-old to play for Sporting Lisbon – the club where her son made his breakthrough – in the future.

Aveiro also said she hopes United star Ronaldo will return to Sporting once last time before he hangs up his boots.

“Let’s see…,” he [Ronaldo] said, but if it isn’t [him], it’s Cristianinho!,’ Aveiro said when asked about Ronaldo returning to Sporting.

‘At his age, he [Cristiano Jr] plays better than Ronaldo. At the time, Ronaldo didn’t have a coach, but today Ronaldo is his son’s teacher.’

Ronaldo Jr has been training in Manchester United’s academy after spending two years developing at Juventus.

Aveiro hopes Ronaldo (above) will return to Sporting Lisbon before he retires. She also hopes his son Ronaldo Jr will play for the club one day

While at the Turin club, Ronaldo Jr put up some impressive numbers for the Under 9s team, scoring 56 goals in 35 games, while providing 26 assists last year.

Ronaldo has been impressed with his son’s performances and said he would like for him to pursue a career in football. However, he did admit that he would support his son if he chose a different path.

‘I would love for him to be a footballer, because he feels passion for this sport,’ Ronaldo told DAZN. ‘He is a competitor and he hates losing.’