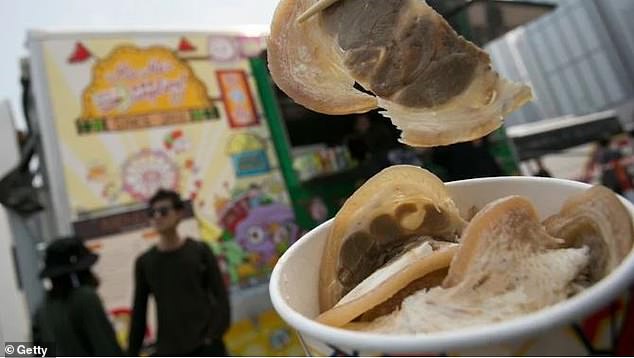 By Maria Volpe For Mailonline


A man has been banned from an all-you-can-eat restaurant in central China after being accused by the owner of eating too much.

The food live-streamer, only known as Mr Kang, was banned from Handadi Seafood BBQ Buffet, in Changsha city, after a few binge eating visits.

He ate an entire tray – 3lbs 5oz – of pork trotters during his first visit to the restaurant and around 8lbs of prawns on another visit, believing he was allowed to. In another visit he downed 30 bottles of soy milk.

Kang told Hunan TV that restaurant was ‘discriminatory’ against people who can eat a lot, adding: ‘I can eat a lot – is that a fault?’

The restaurant owner told the same TV channel that Kang caused him major financial losses with each visit.

‘Every time he comes here, I lose a few hundred yuan’ he said, adding that during his visit Kang can drink between 20 and 30 bottles of soy milk, eating entire trays of food.

The story has gone viral on Chinese social media, with over 250 million views on Weibo, and viewers have expressed a range of different opinions.

The news comes after the Chinese government urged citizens to stockpile food and essentials.

The news announced at the beginning of November by the Chinese Ministry of Commerce sparked panic buying among the public.

According to CNN business, the announcement orders local authorities to ensure that citizens have an ‘adequate supply’ of essentials for the winter, and urges them to keep food costs stable.