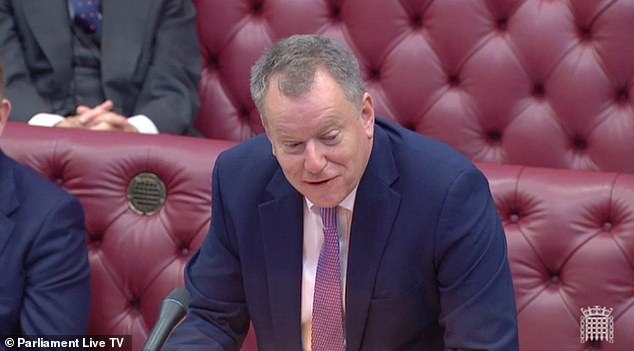 
Lord Frost today warned the EU that a threat to unilaterally tear up post-Brexit border rules in Northern Ireland is still ‘very much on the table’.

Britain and Brussels remain locked in talks as they try to agree ways to fix the Northern Ireland Protocol.

But little progress appears to be being made and Lord Frost repeated at lunchtime that the UK is willing to act on its own and suspend customs checks if the bloc fails to give ground.

The Brexit minister also insisted the UK has not watered down its negotiating demands.

He told the EU not to mistake his ‘reasonable tone’ during talks for ‘any softening in the substantive position’.

Boris Johnson said earlier this week that it would be ‘perfectly legitimate’ for the UK to tear up post-Brexit border rules in Northern Ireland if improvements cannot be agreed with the EU.

But Brussels has warned such a move would have ‘serious consequences’ for the region and the bloc’s relationship with the UK.

The Northern Ireland Protocol, agreed as part of the original Brexit deal, requires checks on goods to be carried out at ports in order to avoid the return of a land border with the Republic.

But it has caused disruption to trade and angered unionists who have demanded the rules be scrapped, arguing they create a barrier between Northern Ireland and the rest of the UK.

The UK and the EU have been holding talks for months on how to improve the operation of the protocol but a breakthrough remains elusive.

The Government has repeatedly threatened to trigger Article 16 of the protocol to unilaterally suspend the border arrangements if the EU refuses to budge.

Such a move would almost certainly trigger a legal challenge from Brussels and could spark a potential trade war.

‘I would suggest that our friends in the EU don’t interpret the reasonable tone that I usually use in my discussions with them as implying any softening in the substantive position.’

The minister told the House of Lords that the threat to trigger Article 16 is still ‘very much on the table’.

‘Whatever messages to the contrary the EU think they have heard or read, our position has not changed… we would prefer to reach a negotiated agreement if we can,’ he said.

‘That is the best way forward for the stability and the prosperity of Northern Ireland.

The Northern Ireland Protocol, agreed as part of the original Brexit deal, requires checks on goods to be carried out at ports in order to avoid the return of a land border with the Republic

‘But I want to be clear, I would not recommend any outcome from the negotiations that I did not believe safeguarded political, economic or social stability in Northern Ireland.

‘In such circumstances, we would obviously need to provide the necessary safeguards using Article 16 and those safeguards remain very much on the table and they are a legitimate provision in the protocol.’

Labour frontbencher Baroness Chapman of Darlington asked Lord Frost to give his ‘percentage assessment’ of the talks succeeding by Christmas but he refused to be drawn.

He said: ‘I think it’s somewhere between zero and a hundred to be honest. I don’t think it helps to put specific numbers on these sort of things.’