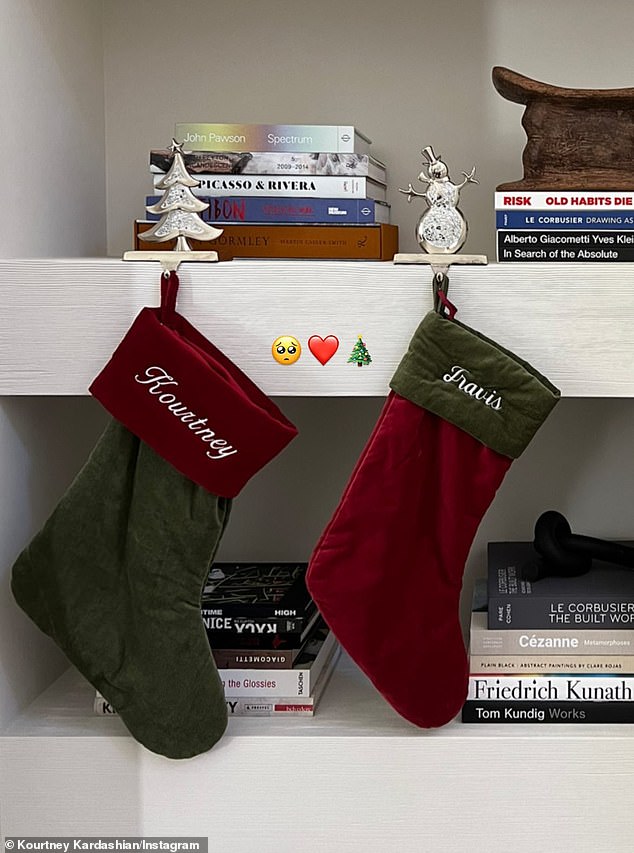 
Kourtney Kardashian and Travis Barker are getting into the Christmas spirit.

On Sunday, Kourtney, 42, revealed they had decorated their home with custom velvet stockings.

In a photo posted to her Instagram Stories, two green and red stockings adorned with their names in cursive hung upon a bookshelf.

Time of the season: Kourtney Kardashian shared a shot of her Christmas stockings to her Instagram Story on Sunday morning

The happy couple have been romantically involved for nearly a full year, and the drummer notably popped the big question two months ago.

This comes after Kourtney posted a slew of photos from her trip to Disneyland with Travis and their children.

The entrepreneur sported a puffy black jacket that kept her warm in the rainy weather during the outing.

She also wore a matching beanie that covered up much of her beautiful brunette locks.

Enjoying their company: Kardashian previously shared a collection of images featuring her and Barker spending a bit of quality time with their children at Disneyland to her Instagram account

At one point, she donned a light-up necklace while posing with her fiance in front of an ornately decorated Christmas tree.

The Blink-182 member also rocked a black beanie and a matching pair of pants.

The now-couple had been friends for several years before they decided to begin a relationship.

Devoted friends: The now-couple had been friends for several years before they decided to begin a relationship

The social media personality was previously in a long-term relationship with Scott Disick, with whom she shares three children.

The musician was also married to Melissa Kennedy from 2001 until 2002, and he later tied the knot with Shanna Moakler, and the pair shared two children and a stepdaughter until their marriage ended in 2008.

Kourtney and Barker confirmed their relationship earlier this year, and they went Instagram official in February.

Going public: The pair were later confirmed to have been dating this past January, and they went Instagram official with their relationship in February

The happy couple later took to sharing numerous shots of each other on their respective accounts over the next few months.

Barker went on to surprise many when he popped the big question to Kardashian while they spent time in Montecito, California this past October.

A wedding date for the happy pair has not been made known to the public as of yet.

Making it official: Barker went on to surprise many when he popped the big question to Kardashian while they spent time in Montecito, California this past October