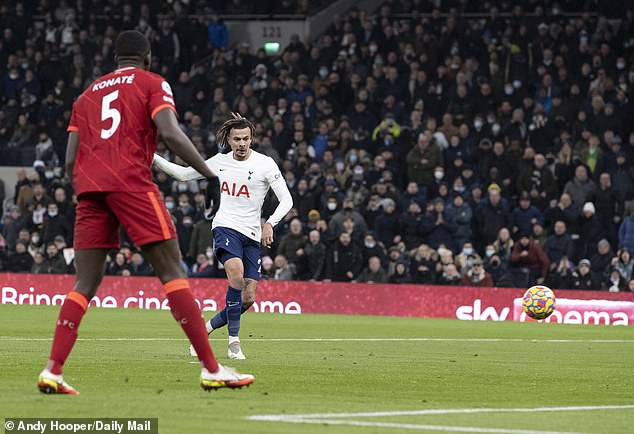 
Dele Alli was given a huge hint by goalkeeper Alisson when he missed a glorious chance to put Tottenham 2-0 up against Liverpool, Jermain Defoe has claimed.

With 30 minutes gone and Spurs a goal ahead through Harry Kane’s early opener, midfielder Alli raced the length of the pitch to put himself in a dream position to convert inside the penalty area from a Son Heung-min pass.

Alli attempted a diagonal shot that replays showed had been faintly touched by Alisson on its way beyond a post.

Former Spurs striker Defoe told Sky Sports: ‘Son’s done well to get into the box. [Alli] just had so much time to look at the goalkeeper.

‘The goalkeeper sort of makes Dele’s mind up. He leans [to his left so] Alli can go for the other corner. I don’t think that [opposite] corner is on.’

Alli took to the turf in frustration and his despair was compounded when Diogo Jota showed no such wastefulness when he headed the equaliser five minutes later.

Alisson took credit for thwarting Alli, although the shot may have gone wide even without his agile intervention.

The direction of the shot gave Alisson a chance of making the save, Jermain Defoe has argued

Spurs manager Antonio Conte praised Alli’s impressive performance despite his miss in the action-packed 2-2 draw, and Jamie Carragher said Tottenham will benefit if he keeps entering the penalty area as he did under former boss Mauricio Pochettino.

Carragher said: ‘Dele Alli, for me, is not a player who does amazing things with the ball. He gets into the box.

‘It was scoring goals and pinging the danger in. 15-to-20 goals, that was his game. It wasn’t about getting on the ball, making teams tick or making passes.

‘He was aggressive, which is what we all love, but he kept making runs into the box that we don’t see midfield players make an awful lot in the game right now. That’s his big strength and that’s what he’s got to get back to.

‘Is it fair to say we’re in last-chance saloon with Dele Alli? Every time Spurs have a new manager, we say “he’s got to get the best out of Dele Alli.”

‘All the managers can’t be wrong: they end up picking him to start with because they think, “he made those runs under Pochettino, I can get the best out of him – I’ll get Dele Alli back.” And it doesn’t happen. It’s down to Dele Alli, it’s not down to Conte.’