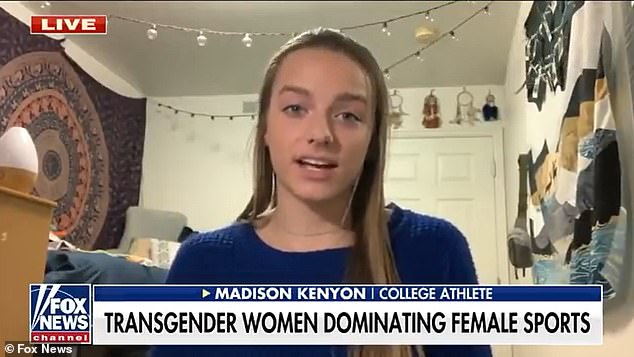 A female Idaho State University track athlete who went to court after losing to transgender runners has urged rivals of controversial Pennsylvania trans swimmer Lia Thomas to speak out about the disadvantage they face in competing against ‘biological males.’

Madison Kenyon filed a motion in Idaho State Court last year along with teammate Mary Kate Marshall to intervene in a legal challenge to the state’s Fairness in Women’s Sports Act, the first legislation in the nation to bar transgender competitors assigned male at birth from competing in women’s sports.

Kenyon described the experience of losing to ‘biological males’ on the field as ‘extremely deflating’ in a Wednesday morning interview with FOX News.

‘The fact that that’s still happening, that women are still losing to biological males in their own sport, shows why we need more female athletes to speak up about this,’ she said.

‘I just want to say to the female athletes in Pennsylvania, don’t let anyone silence you. Speak up, tell the NCAA, your athletic directors and your coaches that you want fair competition, because speaking up about this is nowhere near as scary as it seems, and the amount of support is overwhelming.’

Thus far, the University of Pennsylvania swimmers and several parents have expressed their frustration at Thomas’s presence on the Ivy League team but have done so without providing their names.

Thomas, who was a mediocre swimmer on the men’s team for two years before transitioning, broke two national records when she competed in the women’s events at the Zippy Invitational this month.

In the 1,650-yard freestyle, Thomas beat teammate Anna Sofia Kalandadze by 38 seconds and gained automatic entry to compete at the national championships in Atlanta in March.

‘The fact that that’s still happening, that women are still losing to biological males in their own sport, shows why we need more female athletes to speak up about this,’ Madison Kenyon said in a Wednesday interview with FOX News

Kenyon (right) and fellow ISU runner Mary Kate Marshall (left) filed a motion last May intervening against a challenge that threatened Idaho’s Fairness in Women’s Sports Act, which bans transgender athletes from competing against women regardless of how long they have taken gender-affirming hormones

June Eastwood (pictured), the first transgender NCAA athlete to compete in Division 1 cross country, ran against and beat Kenyon and Marshall, knocking them down a placement level

Kenyon and Marshall detailed losing to  transgender University of Montana runner June Eastwood in their motion supporting Idaho’s law. College Senior Eastwood, who finished four seconds ahead of the second-place runner in that race, had competed on the men’s team for her first three years in school. Kenyon and Marshall’s teammate, they said, finished fourth

Earlier this month, University of Pennsylvania swimmer Lia Thomas (pictured) smashed two national records when she competed in the female races at the Zippy Invitational

In the week after the Zippy Invitational, two of Thomas’s female UPenn teammates anonymously spoke out about their frustrations of having a transgender teammate, despite the entire team being ‘strongly advised’ not to speak to the media.

One of the swimmers told sports website OutKick that UPenn swimmers were upset and crying as they knew their times were going to be obliterated by her.

In Idaho, Kenyon and Marshall decided to intervene in the challenge to House Bill 500 several months after their teammate lost against a transgender runner, June Eastwood of University of Montana, at the Big Sky Indoor Championships of Pocatello in January of last year.

Eastwood, who finished four seconds ahead of the second-place runner in that race, had competed on the men’s team for her first three years in school. Kenyon and Marshall’s teammate, they said, finished fourth.

‘It’s definitely frustrating but I feel most of those feelings come out after the race when you see the podium and you see that there’s a biological male on the podium and I’m not up there but that’s where I want to be one day,’ Kenyon said.

Earlier this month, University of Pennsylvania swimmer Lia Thomas (pictured) broke two national records when she competed in the female races at the Zippy Invitational

This is not fair to women athletes who have spent their lives training. pic.twitter.com/9Dren8Dzum

According to the Bozeman Daily Chronicle, Eastwood (pictured) took testosterone suppressants for 12 months before competing against women, thereby complying with NCAA policies

‘I wonder if this continues, am I going to be that girl that gets bumped off the podium because there are biological males ahead of me that beat me and it’s for the other girls too that lose those spots.’

According to the Bozeman Daily Chronicle, Eastwood took testosterone suppressants for 12 months before competing against women, thereby complying with NCAA policies.

Per existing NCAA rules, transgender athletes are permitted to compete alongside their chosen gender throughout the country after they have taken a year-long regiment of gender-affirming hormones.

In their challenge to the lawsuit against Idaho’s ban, the two Idaho State runners detailed several instances where they or their teammates lost to Eastwood, who they said had an inherent advantage on the field.

‘(Kenyon and Marshall) were incredulous and appalled to discover last year that … Eastwood was authorized to compete in women’s cross country and track events,’ the ISU athletes’ motion states.

‘Both (Kenyon) and (Marshall) had the deflating experiences of running against and losing to Eastwood and being knocked down a placement level because of his participation. They found the experience of losing to a male runner categorically different than losing to a female.’

Idaho’s legislation, signed into law last March by Governor Brad Little, states that there are ‘inherent, physiological differences between males and females that result in different athletic capabilities’ that cannot be bridged by any length of hormone treatment.

Hecox, 19, a transgender woman hoping to try out for Boise State’s women’s cross country team, told NPR in May that it was ‘so blatantly wrong for politicians to try to legislate this.’

‘What I want to do is just run, have a team, have friends on the team supporting me,’ Hecox said in a video posted by the American Civil Liberties Union.

‘There’s no vindictiveness there of me trying to take away girls’ scholarships or trophies or places. I just want to be one of them — I am one of them.’

Lindsay Hecox, 19 (pictured) a transgender woman hoping to try out for Boise State’s women’s cross country team, told NPR that joining the team wasn’t about winning, but about the camaraderie of other women

On December 5, the parents of about 10 swimmers at University of Pennsylvania sent a letter to the NCAA and forwarded it to the Ivy League and their children’s university.

‘At stake here is the integrity of women’s sports,’ they wrote in the letter obtained exclusively by DailyMail.com.

‘The precedent being set – one in which women do not have a protected and equitable space to compete – is a direct threat to female athletes in every sport. What are the boundaries? How is this in line with the NCAA’s commitment to providing a fair environment for student-athletes?

‘It is the responsibility of the NCAA to address the matter with an official statement,’ the parents continue. ‘As the governing body, it is unfair and irresponsible to leave the onus on Lia, Lia’s teammates, Lia’s coaches, UPenn athletics and the Ivy League. And it is unfair and irresponsible to Lia to allow the media to dictate the narrative without the participation of the NCAA.’

The NCAA has yet to respond to the letter.

‘At stake here is the integrity of women’s sports,’ the parents wrote in the letter obtained by DailyMail.com

The university sent a terse response to the parents, claiming the school is doing what it can to help the student-athletes navigate Lia’s success, shared a link to mental health services

Thomas (circled) is seen competing in the Zippy Invitationals in Akron, Ohio on Dec. 4, 2021. She finished 38 seconds ahead of her teammate in the 1,650 yard freestyle event

Thomas (pictured in 2016 and 2017, respectively) was a star swimmer in high school

Fellow University of Pennsylvania swimmer Anna Sofia Kalandaze, pictured above, finished behind Thomas by 38 seconds in the 1,650-yard freestyle race

One parent, who asked not to be identified for fear of repercussions for herself and her daughter, told DailyMail.com, ‘The swimmers have mixed feelings. Many of them want to speak up, but they don’t because they believe they’ll be ostracized.

‘Everybody is scared,’ the mom added. ‘Parents are also scared that the kids will be harmed. We are paying $80,000 for this school. Their life will be impacted.’

The parents of about 10 swimmers banded together in October as Thomas’ advantage became clear.

‘I think that transgender people have a right to compete, but they need to have their own league,’ one of the mothers told DailyMail.com Wednesday. ‘Being fair to one group of people shouldn’t take rights away from another group, and that’s what’s happening here.

‘The NCAA obviously didn’t think much about the rules they set,’ she added. ‘It’s not fair to the women on the team and it’s not fair to Lia as well. She went through transition, and I admire her bravery. But the records she sets now are not valued records, female records.’

The father of another swimmer on the team told DailyMail.com that the parent group is ‘consulting with people who are very in tune with these issues and plan to issue a statement shortly.’

An anonymous female swimmer from UPenn told OutKick that she and most of her female teammates are upset because their coach, Mike Schnur, is allowing a transgender athlete to take a woman’s spot because he ‘just really likes winning.’

Thomas specifically notes Schnur’s support of her transition and switch to the woman’s team calling him one of her ‘biggest supporters and allies in this process since day one.’

Thomas said her pre-transition times are not an accurate gage for her ‘current ability’ but admitted that she did not train as often or as hard in her year off as she did when competing on the men’s team.