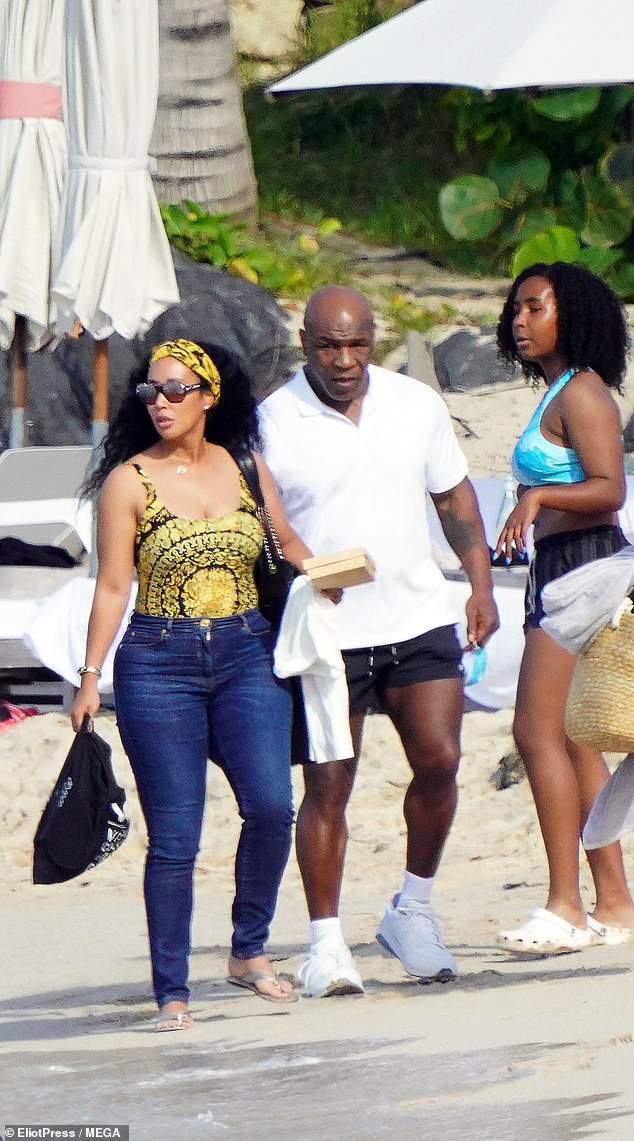 That’s the Christmas former undisputed heavyweight champion Mike Tyson is enjoying with his family is the tropical paradise of St. Barthélemy, France, which is better known as St. Barts.

And on Tuesday the legendary boxer was spotted taking a stroll along one of the scenic beaches in the French-speaking Caribbean island.

Tropical getaway: Mike Tyson, 55, decided to spend part of his holiday season in St. Barthélemy, France, which is better known as St. Barts, with his wife, Lakiha Spicer, and their 13-year-old daughter, Milan

With the sun glaring down and the temperatures in the mid-80’s Fahrenheit, Tyson was seen walking with his wife Lakiha Spicer, 44, and their daughter Milan, 13, as they looked for a good place to lay back and relax.

Tyson and Spicer would later be seen talking a romantic walk along the beach together.

When they arrived at the beach, she was wearing blue denim jeans over a gold and black-patterned swimsuit.

Once situated on the beach, the Pennsylvania native shed her pants and laid back on the sand just in her one-piece swimsuit.

For an added touch of style, she wore a matching gold and black-patterned headdress that pulled her long raven tresses back off her face.

R&R: Eventually, the Tysons found a spot where they laid out their towels to relax on the beach

One day earlier, Tyson was spotted taking a walk along the beach by himself dressed in baby blue shorts, a white Salvatore Ferragamo shirt, and white loafers, all while sporting his iconic tribal tattoo on the left side of face.

Coming prepared for the heat, Iron Mike, as he was known during his boxing career, was seen carrying and waving a fan to help cool himself off.

The Tysons’s daughter, Milan just happens to be a a budding tennis star, who has hopes of becoming a professional, and has even trained with Serena Williams’ coach Patrick Mouratoglou.

Solo: The legendary boxer, who became the youngest man to win a world heavyweight championship at the of 20 in 1986, was also seen taking a stroll on the beach on Monday

The couple, who have been married for over 12 years, are also the proud parent to 10-year-old son Morocco.

He also had a daughter, Exodus, who passed away from a tragic accident in 2009 when she was four-years-old.

Beach-ready: On Monday, the champ strolled around the beach in baby blue shorts, a white Salvatore Ferragamo shirt, and white loafers, all while sporting his iconic tribal tattoo on the