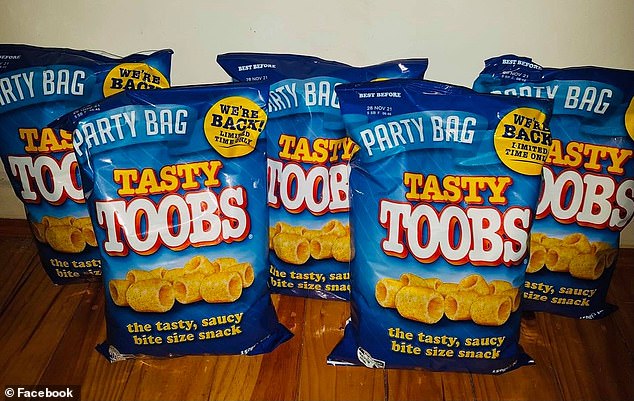 
The classic Aussie chip Tasty Toobs that was twice removed from shelves will make a permanent return across stores nationwide – and will also be made locally in two states.

The tangy, tomato-flavoured chips hit store shelves on Monday December 20 and unsurprisingly shoppers rushed to supermarkets to pick-up a packet.

After a six-year hiatus and brief return earlier this year, the popular snack by Smith’s Crisps has been selling out across the country.

The product was discontinued in 2001 and 2015 but made a return earlier this year but quickly sold out.

The Australian-made version released this week in addition to the original was created in a bid to keep up with ongoing demand.

Customers can purchase a 35g or 150g packet from supermarkets, independent retailers and petrol and convenience stores.

The Australian-made version, which has a ‘firmer bite’ but same iconic Toobs flavour, will only be available in New South Wales and Queensland.

Mr Pandey said: ‘Bringing Tasty Toobs home means we have had to adapt the product slightly in order to produce it locally.

‘We appreciate that there will be a small difference in the product, however, this move is to support locally made products, local employment and to keep up with public demand – which couldn’t be more fitting for a nostalgic Australian snack.’

When launched mid this year, Tasty Toobs were solely manufactured overseas in an effort to return the product back to shelves as soon as possible for adoring fans.

The tangy, tomato-flavoured chips hit store shelves on Monday December 20 and unsurprisingly shoppers rushed to supermarkets to pick-up a packet

Delighted shoppers rejoiced after the news was shared to a Facebook group dedicated entirely to Tasty Toobs.

‘Yay!!! I’ve never been lucky enough to find them so this is great news!!’ another added.

A third wrote: ‘Best Birthday present ever! Look forward to trying the Aussie made version.’